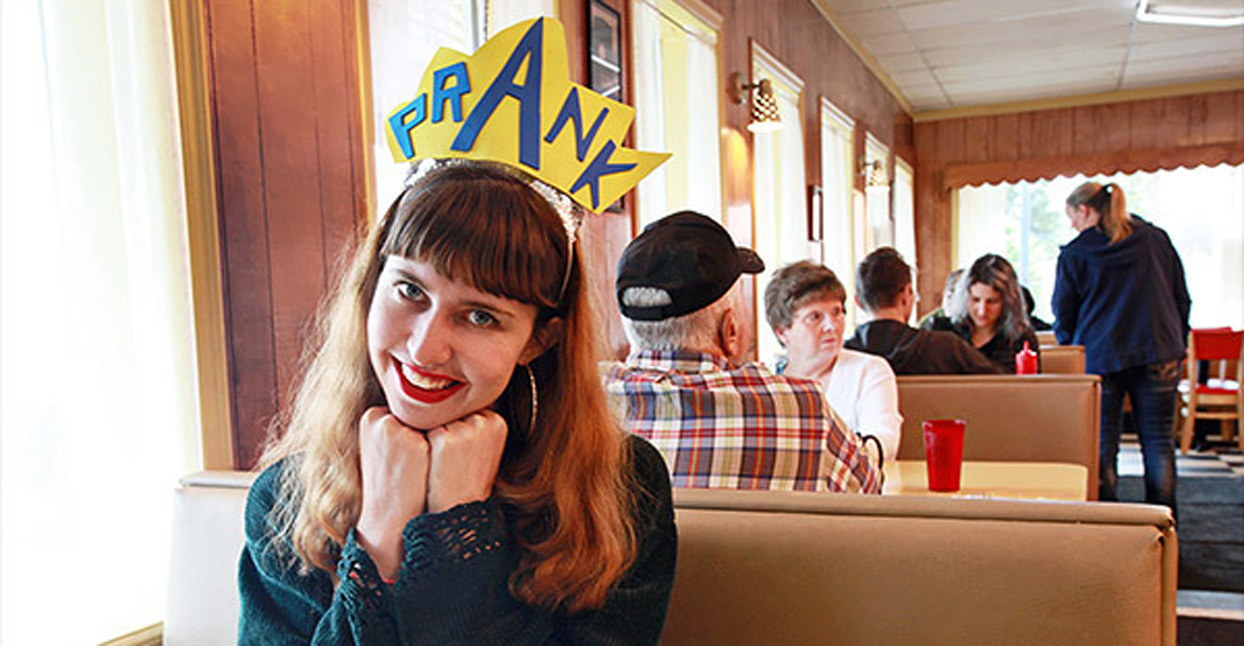 Lisa Prank, a.k.a. Robin Edwards, has a new album out this friday on Father/Daughter Records, a sweet pop-punk ode to adolescence called Adult Teen. To celebrate we decided to take the Seattle resident for some cherry pie and a damn fine cup of coffee at Twede’s Cafe, the local location used in the show Twin Peaks as the Double R diner.

On the way she read my tarot in a moving vehicle and we talked about Lisa Frank, the psychedelic brand of school supplies adorned with kitties and dolphins popular in the ‘80s and ‘90s from which she borrowed her band name. Stream Lisa Prank’s new record Adult Teen now.

How did you come up with the name Lisa Prank?

I first wrote it as a graffiti tag. I’m not, like, a crazy graffiti artist, but while I was on tour I was writing on walls. When I decided to do a band by myself, it was the only thing I could think of. I wanted it to not just be Robin Edwards. I feel like that sounds so singer-songwriter, coffee-shop-like, not that there’s anything wrong with that. It’s just not what I sound like.

Did you own Lisa Frank items?

Oh yeah. I had stickers, binder, folders, I had so much stuff. I love her imagery a lot.

Do you know what she’s up to these days?

Actually, yes. There’s a really intense article about the seedy inner workings of the Lisa Frank empire. There’s just a lot of cocaine and scandal. She has headquarters in Tucson, Arizona. I really want to visit. Apparently there are giant statues of all the characters all over the factory. My friends from the band Upset snuck in and took a bunch of pictures and it looks amazing. It’s not open to the public. Oh also, there’s a really beautiful Lisa Frank tarot deck that someone made. They did all the major arcana with Lisa Frank characters. A banana is the devil, it’s a really beautiful thing. The day that happened, so many people sent me a link and I felt very understood.

Can you read tarot?

Yes, I do it at shows sometimes, at the merch booth. I do an intuitive feelings tarot. I always tell people they are amateur tarot readings, but I guess I’ve been doing it long enough that I feel confident in my readings.

What makes it amateur?

I don’t know, actually, maybe I have gone pro. I know so many people who read tarot who are on a different level. I have a friend in Denver who knows so much about all the cards and the mythology behind them. There’s a deeper meaning of the cards.

I’ve never had a reading done.

Oh really? I’ll read yours right now. I started doing it on tour and I had read tarot just for friends before but I wanted to get better at it so I just started doing $5 readings at the merch table.

Wow, you picked the sun. Drawing a major arcana card is very rare. Big things are happening in your life. This is a big moment for you.The sun is all about basking in the glow of natural light that you deserve after a long night, usually a dark period. It’s about finding the joy in everything around you. One of the things that I always look for in the cards is what kind of growth there is. In this one there are all these beautiful sunflowers growing so these are like the seeds you’ve been planting for a while that are blossoming and flowering and you’re in a place where you can enjoy them. One of the other things about the sun is that everyone can enjoy it. In your success and your happiness at this place you don’t have to worry about your happiness detracting from anyone else’s. You’re just soaking up what is rightfully yours. This is the Sheryl Crow card.

So, what are your favorite Seattle venues?

Black Lodge is really cool. And fitting for this Twin Peaks trip. The Vera Project is a great space. I played with PWR BTTM there and it was such a magical and fun show. They gave me some glitter but it spilled in my purse so now the bottom of it is just filled with glitter. Every time I reach in to get something it’s like a glitter bomb. They make their own glitter.

So you’ve been working on Adult Teen for a while?

Yeah, we recorded it at my house. Eric from Tacocat recorded it. We’ve kinda just been working on it one song at a time like in the living room. We did some of the vocals in the bathroom. Acoustics in the bathroom were supposedly better. I hope it doesn’t sound like it was recorded in a punk house bathroom. It took a little time because we did it when we had time. There wasn’t, like, a set time. We didn’t set out to say, ‘we’re gonna record this in three days because I’m paying for studio time.’

So have you been watching Twin Peaks while making this record?

My roommate gave me the first season on VHS. But I’m watching Season 2 on Netflix. My boyfriend that I’m watching them with right now was like, ‘there’s a spoiler in your house.’ It’s a picture of Leland with his face half-bob. Half crazy-eyed and half-normal. I live in a house with like nine people and there are all sorts of crazy things on the walls and I barely notice a lot of it. It’s a lot to look at.