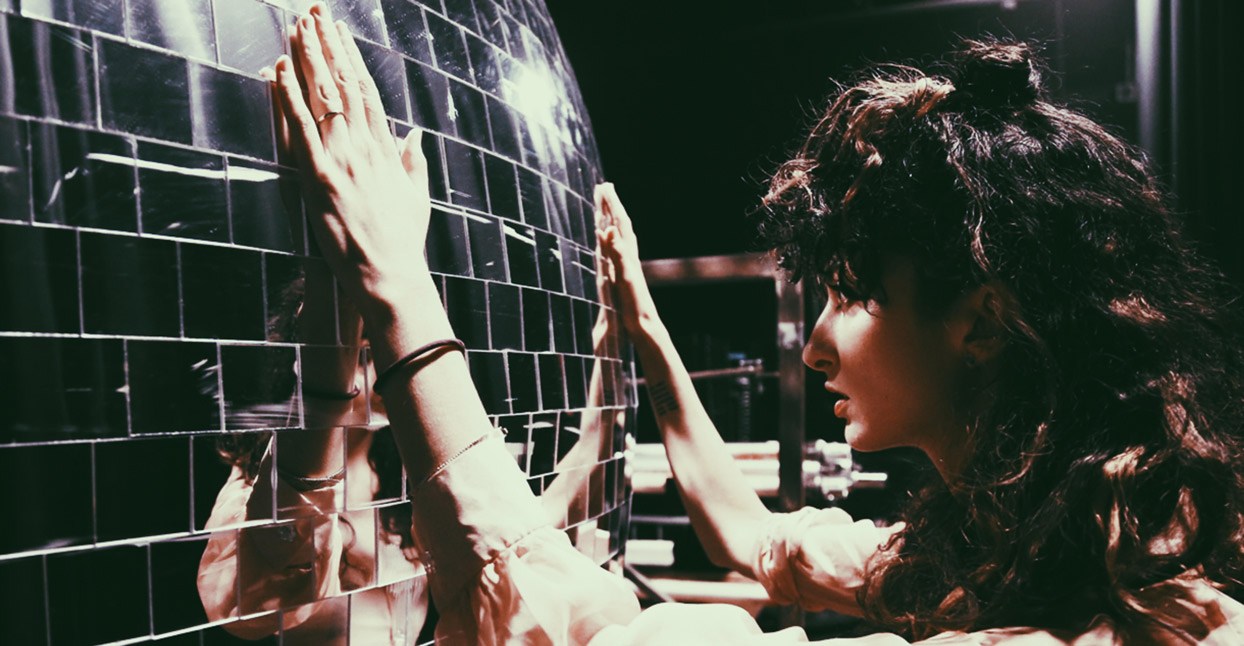 When Sarah Pedinotti was studying contemporary composition and production at the Berklee School of Music a decade ago, her professor gave the class a bizarre assignment: listen to AC/DC’s bluesy “Moneytalks” and draw, on paper, what you see. “I drew this elaborate spectrum where everything was placed,” she recalls excitedly, on a gray afternoon in Greenpoint, Brooklyn. The experience was unexpected for Pedinotti, and went on to play a significant role on D A Y S, Pedinotti’s fully-formed debut as Lip Talk, which utilizes a highly imaginative and vivid sense of space to recreate both the chaos and the beauty of New York City. While its daring, curveball arrangements make it a natural fit for the adventurous Northern Spy Records, it also unabashedly explores pop music, offsetting its knotty construction with deft, hooky choruses.

Pedinotti has been performing music for most of her life. She grew up singing in her family’s jazz club in the resort town of Saratoga, New York. After dropping out of Berklee to tour with a jazz combo, she began performing with the deep-voiced folk singer (and fellow upstate New York native) Sean Rowe; she later served as a multi-instrumentalist in Kalbells and the veteran indie-rock ensemble Okkervil River.

Yet comparisons to those other artists fall short in describing the relentless experimentation of D A Y S, which is Pedinotti’s first release since 2014 and her debut as a producer. The mixes, on which she collaborated with engineer Ian Hersey, are as valuable as the songwriting itself. “Producing a song is as important as writing a song [to me],” she says. “Each one is like a little movie. Some parts need to be cleaner. Some parts need to be more fucked up.” The clatter and claustrophobia of the city—Pedinotti lives in an industrial part of Brooklyn near the Brooklyn Queens Expressway—are practically tangible in her songs, giving them a sweeping, cinematic scope. “W i n n e r s” is stuffed with a bouquet of tinsel-y noise, and its lyrics reveal a striking scene: As Pedinotti explains, the main protagonist is a drag queen riding in the back of a garbage truck, decked out with a disco ball. “She’s so hot and kind of a superhero. It ends with her in an abandoned parking lot. The back opens up, garbage is flying out and she’s just dancing her ass off,” she says. “The cops don’t know what to do—they’re stunned by her power.” Many of the album’s tracks share a similar nocturnal, only-in-NYC strangeness; the slow-burning closing track “No One,” led by a gentle cross-hatching of murky pianos, imagines a world without people, “and the earth healing itself,” Pedinotti says. It’s unclear whether that’s a wish, or a fear.

Unsurprisingly, the term “art rock” gets thrown around in descriptions of Pedinotti’s music, and it’s not entirely unwarranted: in her songs, the lurking menace of the city is constantly reinforced by crunching, modulated drums—courtesy of Ian Chang, Bryan Bisordi, and Pedinotti herself—which provide a boisterous backing to Chris Kyle’s vicious guitar work (see: “Ad Junkie”). Yet that shorthand fails to capture the album’s frequent nods to contemporary R&B. Pedinotti listened extensively to D’Angelo’s Black Messiah, Kendrick Lamar, and Solange while she was writing D A Y S, and you only need to listen to late-album highlight “Fuk it Up,” or the album’s brief title track to hear their influence.

At its core, D A Y S captures the point where menace and sweetness collide. When asked if she is an optimist, Pedinotti responds with a laugh. “I have to be,” she says. “Getting through the night may be hard, but there’s gonna be a day after,” she says, explaining the album’s title. Vivid, visceral, and pummeling, D A Y S is a fully formed and staggering debut; it offers nothing less than an honest approach to modern city life, where joys and trials come in equal measure.