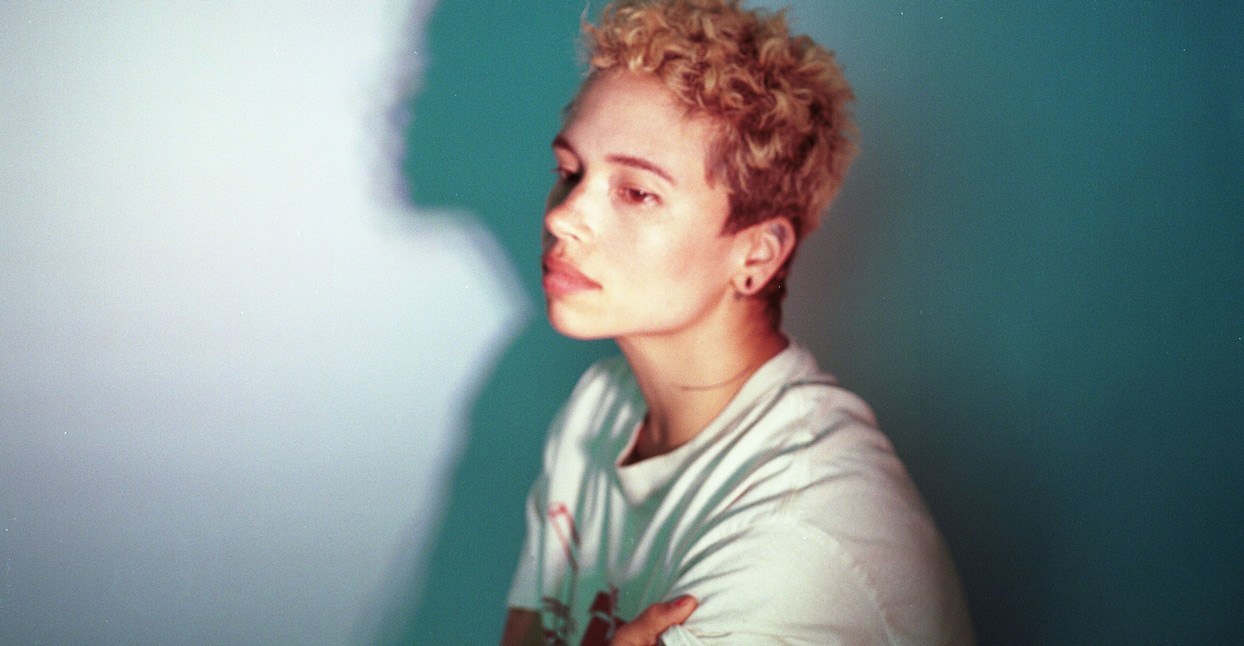 Holland Andrews, the New York City-via-Portland, Oregon experimental musician who releases music under the nom-de-plume Like a Villain, wields their voice as a fearless tool for exploration and improvisation. Their astounding range can be heard on “You Got It,” a dark, industrial-tinged, sax-and-synth-led single from their new LP, What Makes Vulnerability Good. The track finds Andrews taking a number of unexpected U-turns: from operatic intricacy to death metal brutality; airy falsetto to guttural throat singing.

What Makes Vulnerability Good isn’t Andrews’s debut, but it feels very much like a statement of arrival. It takes courage to sing like this, to make music this boundless. And the 31-year-old’s courage is hard-won.

Growing up in Southern California, some elements of Andrews’s upbringing sound traditional. Andrews spent their early years surrounded by family from their mother’s side. “Everyone was always singing,” Andrews says, cross-legged in a shady patch of grass in a Douglas fir-speckled park in northeast Portland. “Mom was a singer, all my aunts on my mom’s side of the family sang. There was this group of cousins—we were all around the same age, so we were more like sisters. We would sing to get stuff from the adults. If we wanted McDonald’s, we would sing a five-part harmony, just singing the word ‘McDonald’s.’” It worked for a while. Then they started asking us to spell it.”

Andrews had the quietest voice of the close-knit group—their older sister was the more outgoing singer. But Disney movies and old musicals were in constant rotation in their house, and their mother and her sisters had released a single and performed on Soul Train as M-D-L-T Willis in the ’70s. Andrews knew that they wanted the release that would come with singing at the top of their lungs. “I didn’t actually experience that until I started doing musical theater summer camps with my sister,” they say. “And I was like, ‘Oh, here’s a space where I’m allowed to be alive.’”

But life back home was darkly complicated. The songwriter’s mother was living with schizoaffective disorder, which would lead to an increasing dependence on drugs and alcohol, then full-blown addiction. Family dynamics shifted radically. At the lowest point, Andrews’s mother’s boyfriend tried to drown Andrews—an event that would help their father take full custody. In conversation, Andrews is careful to separate their mother from her mental health and addiction issues. “She was somebody that loved me more than anybody else I ever knew, period,” they explain. “But I saw a lot of scary shit. Somehow I learned to trust this woman that showed me so many different sides of herself.”

In 2005, after their parents split, Andrews’s mother committed suicide. Andrews was 16 years old. “I think I was one of those people who kept myself from being angry by saying things like, ‘Oh, but they were mentally ill; they were dealing with alcoholism; they had this trauma,’” they say. “That’s all true, and I’m glad I had that approach. But it did stunt a lot of processing of my own feelings.” That processing wouldn’t happen until much later, when their work on What Makes Vulnerability Good began.

In the short-term, though, Andrews’s controlled reaction to that family tragedy would dictate the path ahead. Having seen the damage of addiction up close, they made the decision to go sober 45 days after their mother’s death, and signed up for a group rehab program in California. “In those walls, and in those communities, you’re thrown into the mix—it’s all kinds of people from all different walks of life,” they say. Already a pro at navigating complicated family alliances, Andrews learned how to connect with many of those people, despite their differences.

That ability to move between worlds may explain why, when visiting a friend in Portland in 2008, “there was just a click,” they say. They moved to the still-affordable Oregon city with dreams of becoming a tattoo artist, a metalworker, or a musician. It was the music community that stuck first, and Andrews quickly found roles playing clarinet and singing with indie-folk projects like Meyercord and The Ocean Floor. Like A Villain took a little longer to find its foothold, which did not come as a surprise. Ten years ago, Portland was a city dominated by white, male indie rock musicians. Andrews was none of those things: their live performances were highly improvised, loop pedal- and clarinet-led vocal excursions into deeply emotive places unknown. “I saw myself as this weird, niche thing that was pretty different from what the spotlight was ending up on,” Andrews says.

But around five years ago, the Portland music scene began to change. A slow movement toward “more dialogue around inclusiveness and activism and integration” took hold, Andrews remembers. Today, many of the city’s biggest breakout artists—Aminé, Black Belt Eagle Scout, and The Last Artful, Dodgr, to name a few—represent a more diverse Portland than Andrews first encountered. “There’s been this radical shift,” they say. “Everything is on the table now.”

Holland Andrews’s music, though, lives in a stylistic world of its own. It’s not a stretch to say that no one sounds quite like Like A Villain. But in 2013, while Andrews was trying to figure out exactly where their music fit into the world, something broke open. They were invited to play the avant-garde Time-Based Art Festival; TBA’s parent organization, The Portland Institute for Contemporary Art, would play a large role in connecting Andrews to both collaborators and audiences ready to hear the artist’s provocative improvisations with open ears.

With that supportive springboard, the last six years seem to have slowly integrated Andrews into the world of avant-garde music. They have worked with visual artists and created performance art pieces. A bold collaboration with Rwandan-born singer/writer/choreographer Dorothée Munyaneza called “Unwanted”—built from a foundation of harrowing stories from Rwandan refugees—has kept Andrews touring internationally for the past two years.

It was while participating in an arts residency in Austin in 2015—just after seeing their mother’s suicide note for the first time—that Andrews began processing their grief through music, writing songs that would land on What Makes Vulnerability Good. “It became clear to me that I was finally ready to share this very complicated horror that happened to me and my family,” they say. “It wasn’t like I had a lot of things repressed, it’s just that for whatever reason I wasn’t ready until I was.”

While these narratives don’t make up all of What Makes Vulnerability Good, they do provide some of its most musically and emotionally striking moments. On the aforementioned “You Got It,” Andrews takes on the role of their mother in the losing custody battle. The attempted drowning by their mother’s ex-boyfriend is addressed on the airy and sinister “Wave Be.” These profoundly intimate glimpses at personal trauma round out Andrews’s experimental spirit with something real, albeit gutwrenching. “What you gain from grief is a deepening of your understanding of humanity,” Andrews says. “It’s just another layer of yourself that you can share with other people.”