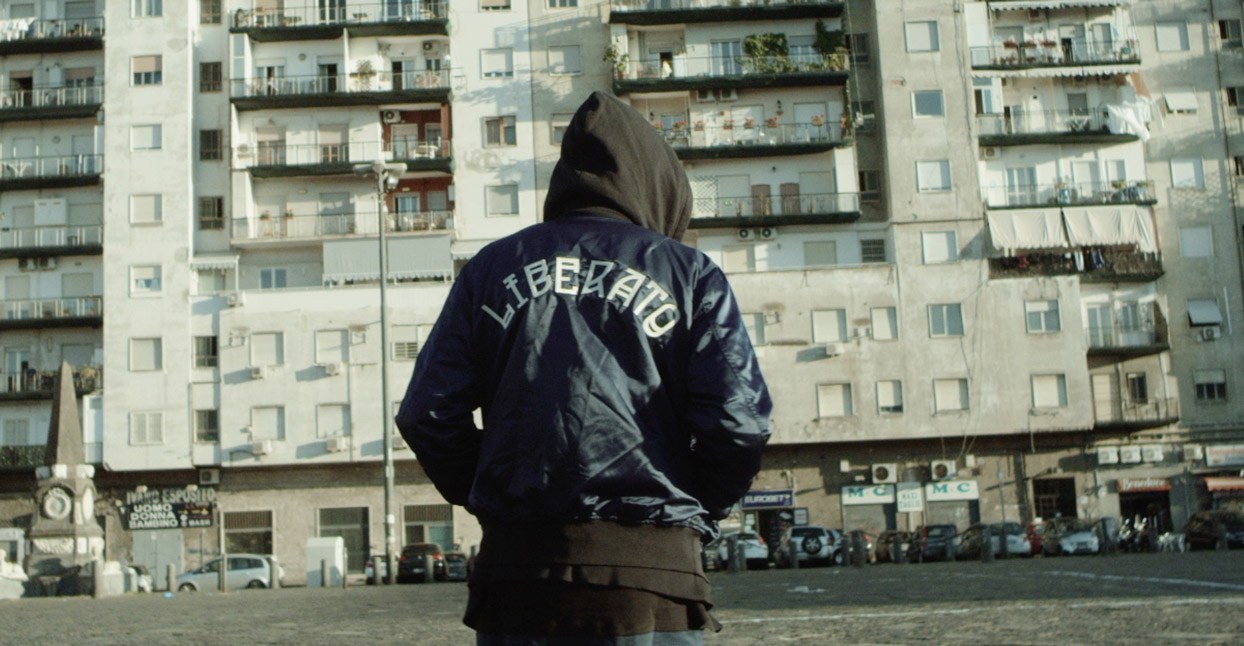 Liberato wears a jacket with his stage name written on the back, in a font typically found on banners made by Italian soccer hooligans. That’s all people know about him—that, and the fact that the tracks he started dropping since February 2017 quickly turned him into a musical phenomenon. His first single “NOVE MAGGIO” was a break-up song that floated somewhere between R&B and auto-tuned rap, with differently pitched vocal layers chasing one another over warm, spatial synths and trap beats. It primed a cascade of curiosity coming from the whole country that, however, wasn’t solely a matter of music.

A lot of the immediate attention Liberato received had to do with the mystery behind his identity: Some argued Liberato is a poet from Scampia, one of Naples’ most troubled suburbs. Perhaps, others suggested, there is a team of electronic music producers behind this moniker, or maybe group of Italian indie artists and rappers. His most imaginative fans have even hypothesized that Liberato is actually a kid incarcerated in a juvenile hall on an island near Naples, making tracks for some music-focused rehabilitation project.

The only certain thing is that Liberato is deeply connected with Naples, the largest city of southern Italy, and with all of its most identifiable icons: the skyline made unique by the presence of the Vesuvius volcano, the Maradona graffiti in the narrow streets overflowing with scooters, the battered buildings decked by washing lines, the street food tradition—it’s the city where pizza was invented after all.

These and more locations candidly appear in Liberato’s music videos, where director Francesco Lettieri (some say he’s Liberato) always tries to show the city in the most realistic way possible, seamlessly bouncing from stunning sea views to rationalist concrete buildings. It reveals the true identity of the city—as opposed to the stereotypes it usually suffers from in the rest of Italy, regarding mostly waste management issues and the criminal activities of the local mafia, known as the Camorra.

But Naples also lives in the language Liberato chooses to use: all of his songs are sung in Neapolitan dialect, and some are even specifically about the city of Naples itself. Like on his second single, “TU T’E SCURDAT’ ‘E ME,” where several landmarks of the city become the setting for another break-up song, stylistically similar to its debut but even more gripping, spiced up with fluttering high-pitched vocals, watery synths, and overwhelming crescendos. “Guarda ‘e fuoche abbascio Furcella / Chiove ‘ngopp’a Nisida / E tu t’hê scurdat’ ‘e me” (“Watch the fireworks in Forcella / It’s raining over Nisida / And you forgot about me”), he sings.

The musicality of the Neapolitan dialect is a well-known fact to anyone who is familiar with the tradition of Canzone Napoletana, which is often what Italian old folk music as a whole is associated with abroad. Liberato fiddles with that, and enriches his dialect with the use of English and neologisms, transposing it to today’s forms of poetry and drama. One of his most recent tracks, “JE TE VOGLIO BENE ASSAJE,” which translates to “I love you very much,” has a title borrowed from a popular song written in the early 19th century. Liberato turns it into a half-English, half-Neapolitan soap opera of missed calls and heartbreaks: “Pronto, comme staje? / No, nun riattaccà / Baby, I’m so high / E nun saccio cu’ chi staje” (“Hello, how are you? / Please don’t hang up / Baby, I’m so high / And I don’t know who are you with”), and then: “Baby, tell me why / Je te voglio bene assaje / All night.”

Of course, Liberato isn’t the first to use modern day Neapolitan dialect in a song—it’s a common practice in the Naples-based music underworld of Neomelodico, which often flows into the territories of kitsch and vulgar, and which is by far the most popular music in the city and its surroundings. But Liberato’s musical outcome is much more appealing to the worldwide-oriented listeners from the rest of Italy: From the ethereal dance of “ME STAJE APPENNENN’ AMÒ” and the Caribbean influences of “GAIOLA PORTAFORTUNA” to the anthemic qualities of his most successful singles, he crafted a well-defined imagery that mixes the Neapolitan tradition with several electronic music influences and trap aesthetics, and that therefore sounds truly fresh and contemporary. Whether the final product is the most authentic expression of the city he portrays, that’s a tougher question: for sure, it’s one of the most charming and accessible ones.