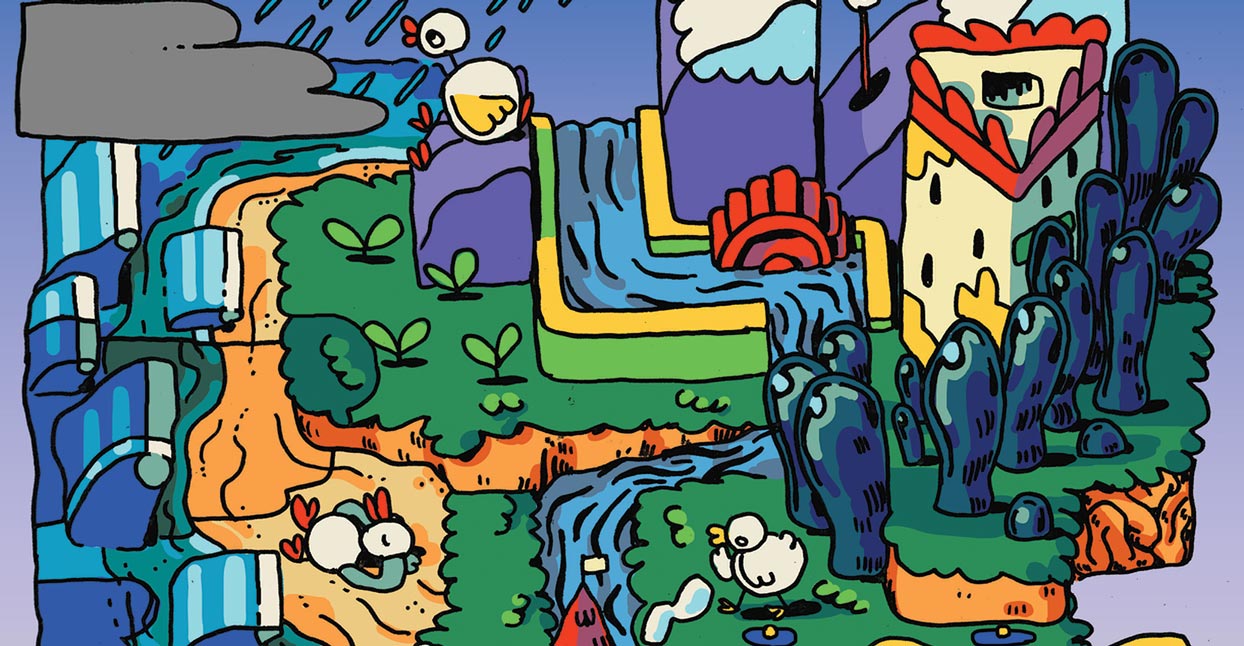 A bowl of luminescent beef noodle soup pulsates just out of wing’s reach, its glow in sync with the rhythm of your dangerously-low health bar. A boss is lurking around the corner. If you’ve got any chance of completing this level, you need those noodles. Then, just as you see a way out—CRACK! A rogue monkey scores a lucky strike, flattening you with a coconut husk.

You could, if it were possible. Except Bird World doesn’t actually exist. Its soundtrack does, though. A deliciously sprightly, animated 12-track narrative that employs an SNES-like sound palette, but is rooted in rudiments as deep as classical and jazz, Bird World is the creation of 29-year-old NYC-based composer Leon Chang.

If you fraternize with the leftfield surreal satirists of Twitter, you may already know Chang. Blue-checked since 2010, @leyawn is one of Twitter’s good guys, using the social platform for all the right reasons: supporting fellow creative and artistic spirits, engaging in endearing bouts of self-deprecation, posting anime memes, trippy Disney sci-fi comics, issuing gentle meta-chides at the foibles of the neoliberal capitalist machine, promoting his own Twitter RPG and, for the last two years, offering his music.

The latest line spun from his seemingly non-stop creative machine—which he somehow finds time for in his daily schedule of writing, jokes, art, and his day job in advertising strategy—Chang’s music echoes his online eccentricities; pixelated, witty, reference-filled (one of his earliest tracks was a ridiculously funky loop of dialogue from Joey from Friends) instrumental electronic pop. Then he got serious, and came up the Bird World concept.

Bird World, his debut album, and his first physical release, is the result of six intense months of composing, creating, and character-building, enlisting fellow Twitter friend Titas Antanas Vilkaitis to create the Yoshi-like visuals. With its own character guide, level maps, and clear storylines, Bird World really is a world unto itself.

Creatively and sonically rejecting any notion of kitsch nostalgia or chiptune novelty, Bird World is rich in instrumentation, with musical imagery that draws on Chang’s 23 years of classical piano studies and NES investigations. There are also hints that this is just the tip of the musical iceberg. While most people right now know Leon for his jokes, many more will undoubtedly come to know him through his music. We dragged him away from his many creative side hustles to get to know him better.

Has Twitter given you time off for this interview?

Ha! My main endeavors on Twitter are silly jokes. That’s what most people know me for. But it’s great to hear when people find me through my music.

I really liked how you asked your followers to share their creative ventures with you recently.

I thought I’d do that because of my album. It’s been such a huge creative endeavor so I thought it would be cool to say, ‘Hey, I’m sharing something with the world, please tell me the creative things you’re all doing.’

I’ve had so many inspiring replies. One person sent me an exhibit they curated at a museum. I’m getting a lot of art, music, writing. I’ve been sent screenplays. One guy sent me a graph he’s developed to measure and validate galaxy distances using NASA telescopes. It’s beautiful to see what everyone is working on and creating. A lot of people follow me—why not find out what they’re up to?

Music is the latest in a wide range of creative endeavors for you. It sounds like you’ve been playing, and perhaps studying, music for a long time—especially considering the piano elements that feature in a lot of your work.

My main background is, indeed, piano. I’ve played from age six. I started off with classical, then took jazz piano classes in college. I have a piano at home which I tinker around on, that’s where a lot of my tracks start off.

I’d been wondering if the influence of game composers such as Koji Kondo or Hiroshi Kawaguchi had played a role in the jazz aspect of Bird World, actually…

Japanese video game composers have certainly had an influence, but there’s a lot of old jazz that’s inspired me over the years. Thelonious Monk has been a big influence. A lot of things I listen to now have been influenced by jazz. One of the biggest influences on my musical tastes now is a duo from Canada called Tennyson. They’re very jazz-influenced with the chords and improvisation. But jazz is such a nebulous and all-encompassing term, isn’t it? When we’re talking about the jazz elements within Bird World, I’m drawing upon so many different aspects of jazz: bossa nova, jazzy hip-hop, all types of stuff.

Game OST craft is very subtle, but plays such an important role in the gaming experience, doesn’t it?

When people think about game soundtracks, they think of chiptune, 8-bit type of things, but it’s been way more than that since the SNES and PlayStation. The audio capabilities of the systems since then have meant any music can be played on games. That’s an important thing for me within Bird World. That’s why there’s all kinds of elements—piano tracks, marching tunes, and lullabies.

What composers have really inspired you?

In addition to the ones you’ve mentioned earlier, composers like Nobuo Uematsu has been a big influence, he does all the Final Fantasy OSTs. Also Yoko Shimomura. She did OSTs like Super Mario RPG and Street Fighter II, which is a very different type of soundtrack. It’s similar to the Marvel vs. Capcom 2 soundtrack, which is very jazzy and hip-hop.

What was the very first OST that really grabbed you?

Final Fantasy VII. A big part of engaging with the story is the music. There are cutscenes in it but also lots of different locations, battles, enemies, and they all have different soundtracks. I can listen to any part of that OST and know exactly where it is in the game, or what enemy I’d be fighting. That’s a strong response to evoke!

A lot of these influences can be found within Bird World, can’t they?

I definitely draw upon a lot of different games from my past—different sound FX and drums, little references to old games like Yoshi’s Island, Spyro the Dragon, and Ape Escape. I also used a great emulator for a SNES instruments, called C700, on a few tracks to emulate OSTs from old SNES games but only in a subtle sense—mostly to blend it in with the wider elements.

What came first for Bird World, the music or the concept?

The very first thing was a tweet! I decided last December I was going to write an album, so I posted that I was doing just that. I hadn’t started on it. I had no theme or concept, but once I started writing, I was thinking of the common thread. I realized most the songs I write tie to a physical location—a beach, an island, a bustling city. It felt very environmental. From there, the video game aspect became clear because that’s what you do in a game: you go from level to level, location to location. The music evokes the feeling of each location. The first tune I wrote was ‘Green Tea Forest.’ I used a lot of orchestral elements and bird sounds in there, and FX like pouring tea and hitting a teapot. I wanted it to feel like you’re in a magical forest. I thought, ‘Okay this is a cool idea, how do I expand this?’ That’s where it took off.

Did you do the illustrations yourself, too?

That’s a friend of mine, Titas from Lithuania. We met through Twitter, actually. He does these video game concept-styled pieces. When I thought about the game, it wasn’t about the character aspect—it was more about locations. So I got in touch and sent him the first draft of the album and said, ‘Imagine the characters who might inhabit the tracks.’ He just ran with it.

That’s quite a compliment to hand over the entire visual side of your world!

He’s such a talented artist. I’ve been following his stuff for a while, and I know he’s a big fan of old video game manuals and concept art. I knew his style would be exactly what I wanted.

And all this began just six months ago?

Yeah, I started composing mid-December. When I have an idea in my head, it all comes about pretty quickly. From start to finish, I can do a song in a couple of days. For the album, I took more time to edit and fine-tune songs to tie it all together conceptually, but the whole process took a pretty short amount of time, five months in total. There was definitely a lot more work in the last week. I came up with a song idea a couple of days before the album was supposed to be released, and actually managed to finish it and put it in there as well.

‘Hazelnut Harbor.’ I was tinkering with some chords and knew it had potential for the album. It was literally just a few days before the release so I stayed up two nights to complete it.

So now you’ve documented and captured these places, will you return to Bird World? Or will you create another universe for the next project?

There’s a lot of B-Sides and leftovers that didn’t fit the album’s concept. I guess they’re kinda lo-fi, hip-hop sounding tracks—more beats than fleshed-out songs. I’d like to do something with them. I’d also like to return to Bird World with some bonus songs. So yeah, Bird World isn’t over now that the album is out.

It’s been out for a month now. Have Nintendo called yet?

Ha. Not Nintendo, but a few people have reached out to say, ‘Hey I work in game development. If you’re interested in creating a game or soundtracking for games, please get in touch.’ That’s a really cool and exciting opportunity to have. There’s been some amazing response to the album full stop with a lot of people buying the physical copy, too. This is more than I ever imagined at this stage. It’s incredible.