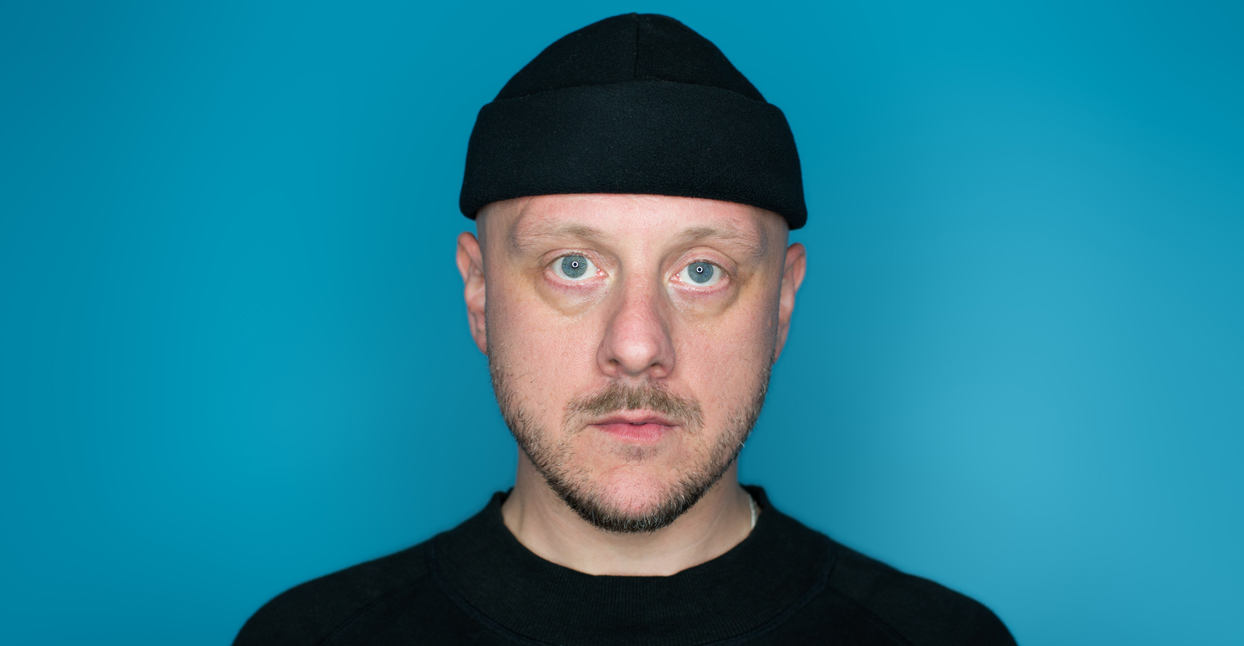 Blending rave, dubstep, techno, and jungle, the songs on producer Lee Gamble’s new album, Mnestic Pressure, seek to connect the common traits undergirding these genres, teasing out and recontextualizing the sounds to create music that is sometimes frantic and harried, sometimes austere and controlled. Pressure—Gamble’s first for the London-based label Hyperdub—comes after a three-year silence. The British producer took time to build new sounds and song structures, literally redesigning the way he hears and thinks about music. There’s a quiet humanity to these rigid songs, an underlying heartbeat that keeps the metallic motor moving. This is worldbuilding in the strictest sense. There isn’t a sound on Mnestic Pressure that Gamble didn’t construct, refine, and carefully place.

We spoke with Gamble from his home in London to discuss the influence of London club culture, and the process of intellectualizing music.

Having lived in London for so long, is there still a tangible way in which the city itself impacts the way you make music?

I think so. It impacts everything, really. I grew up in Birmingham and London, which are the two largest populated cities in the U.K. It’s sort of in your system at that point anyways, that thing. Sometimes, it can have the reverse effect, too: You can delve into your work as a sort of escape. It doesn’t necessarily mean that you’re gonna make something that sounds like the city. It could quite well mean the opposite. I just think the larger cities—somewhere like London—has a bit of everything, really. It’s got a bit of everyone and a bit of everything. So you can pick and choose a bit more. If I was living somewhere more rural, it would be more singular—but I’ve never really lived anywhere rural.

This is your first album in three years. What happened during that time that allowed you to tackle this record from a fresh perspective?

I’m always playing with stuff. I get to a point with music—production-wise, especially—where I can’t really keep up. I found a certain way of producing and a certain way of making a specific sound  over the last few years, and then thought to myself that I wanted to move on. The opposite can happen, too, where you get stuck on what you know, and I didn’t really want that. So I was teaching myself some new ways of working and composing, producing and sculpting sounds.

I spent most of the time doing that, really—pushing ideas around. That takes a long time for me. I have to make music and then sit on it, just so I can go back to it and reassess it after a few months. I have to ask myself if it just felt like a new track, or if it actually has some weight and can last more long term. These things always take me a bit of time. I make a lot of stuff, but I wouldn’t call myself prolific by any means. With accelerated release schedules, the internet, and technology, getting caught in that ‘wow’ factor of something new can be bad for me. I need to sit with these things to work out whether it’s just new or whether it’s got something I actually need.

I also set up a label called UIQ, which took a lot of time. I’ve never run a label before, so that really took a lot of my year. It took a lot of my energy, too, but I really wanted to get it sorted. Those were the two main concerns in readjusting and reassessing how I go about what I do.

You spend most of your weekends touring the U.K. Is that another way you work out ideas?

Because I was working towards this album and I’ve been building a very specific live show around the album, I’ve been DJing a lot. I didn’t really take any live bookings. That really does have an effect, because DJing is a really different thing than playing live. One, I’m playing other people’s music. The ability to feel out different sounds and styles has been important—realizing what sounds an audience likes. You sit at home and listen to stuff, but it doesn’t always transfer to 4am at a club. That’s been an interesting way of finding out what things work.

When you sat down to record Mnestic Pressure, was there anything specific that you were trying to do differently this time around?

I guess my initial approach to anything is just sound design. I’m just building and making sounds. That’s my background. It’s a really strange thing. I’m pushing and moving stuff around. I was running things at much higher BPMs than I ever have before because I just had this kind of internal clock that wanted to get away from 4/4 and that techno grid. Once you push that BPM past 160, you can’t really make a 4/4 track. I mean you can, but it’s fast and sounds a bit mad. I really wanted to explore what would happen when I pushed up into that 160 BPM area.

I was sketching a lot of geometric ideas of how to form sounds at these different tempos. I used a lot of grids to see what sounds would fit. I’ve worked much more sculpturally and loose in the past, and with this one, I really wanted to snap everything in. I don’t think that’s what the album necessarily sounds like, but that’s the framework I wanted to give myself.

I wanted to speed up the whole album, I wanted it to be more forceful and dynamic. I’ve made a lot of drifty, cerebral stuff. I wanted to keep myself interested. I don’t like repeating too much of myself, I get quite bored. There are loads of remnants in my work of my old stuff, but it may just be related to how I make a chord or a pad. I just use them differently now. I gave myself a different set of parameters this time, and over the course of a year, you really start to see a different type of result.

You refer to your earlier records as ‘subaqua,’ ‘hallucinated,’ and ‘from the unconscious.’ You call this one a ‘decoded offspring’ of those. When you made Mnestic Pressure, did you view it as a reflection of and conversation with your older records?

I didn’t want to completely start again and lose all the stuff I’ve done. I wanted to drag my stuff forward, though. My music is constantly moving. U.K. dubstep has remnants of jungle in it, but it’s not jungle. So I kind of meant it in that way. It’s my own continuum. It has something in it that I feel close to. I didn’t want to reset everything and start again, I just needed to reset certain parameters and allow the old ones to bleed back in.

I think [in the past] I made music that was more ‘in your head’ than a straightforward techno track. It felt like Xerox copies of techno music or something. I just wanted to play with certain notions that would tease out techno ideas without it being techno music. With my new record, I wanted to take it out of a mental space and bring it out on the land, if you will.

Do you enjoy analyzing your music?

To be honest, it’s not really a chicken or an egg situation for me. It is what it is, that’s the only way I can do it. I didn’t learn how to play an instrument, I don’t know how to notate. It’s more abstract for me. I have to figure out how I’m going to arrange something. ‘Concept’ is just built into what I do, it’s not added on afterwards. ‘Concept’ is sort of the thing that drives the work. It’s not a reflection, I’m not thinking about it, it’s born out of the ideas I jot down about making a record, making a live show, and everything else.

One thing I’m absolutely dedicated to, though, is that the music should be able to stand out on its own. It doesn’t need all this stuff I’m talking about. That stuff is there to think about, but it shouldn’t be important if that’s not how you want to listen to it. I like it, but if you just want to put on headphones and listen, fine. I’m not gonna hide the reasons I’ve made them, though.

I know you do a radio show, and that the radio as an institution has a big impact on your music. What is your relationship to that platform?

As a kid I was taping pirate radio shows all the time. It’s just an interesting medium, really: It’s democratic, open, and free for anyone to listen to. I was listening to tapes that had been recorded off the radio of raves as a teenager. I could never go to the raves, but I would still have access to the music. I couldn’t afford the 12” records then, so it was really important for me to actually hear and engage this stuff. I like that there’s a certain anonymity to it. You can just turn on the radio and not know where the song is from or who made it. Of course, it’s different with internet radio, but you can still tune into a shortwave radio and it’s pretty trippy. It just seemed like an interesting object: a dial you could turn that would emit sounds from all over the world or the country. I’ve been engaging with it all my life in one form or another.