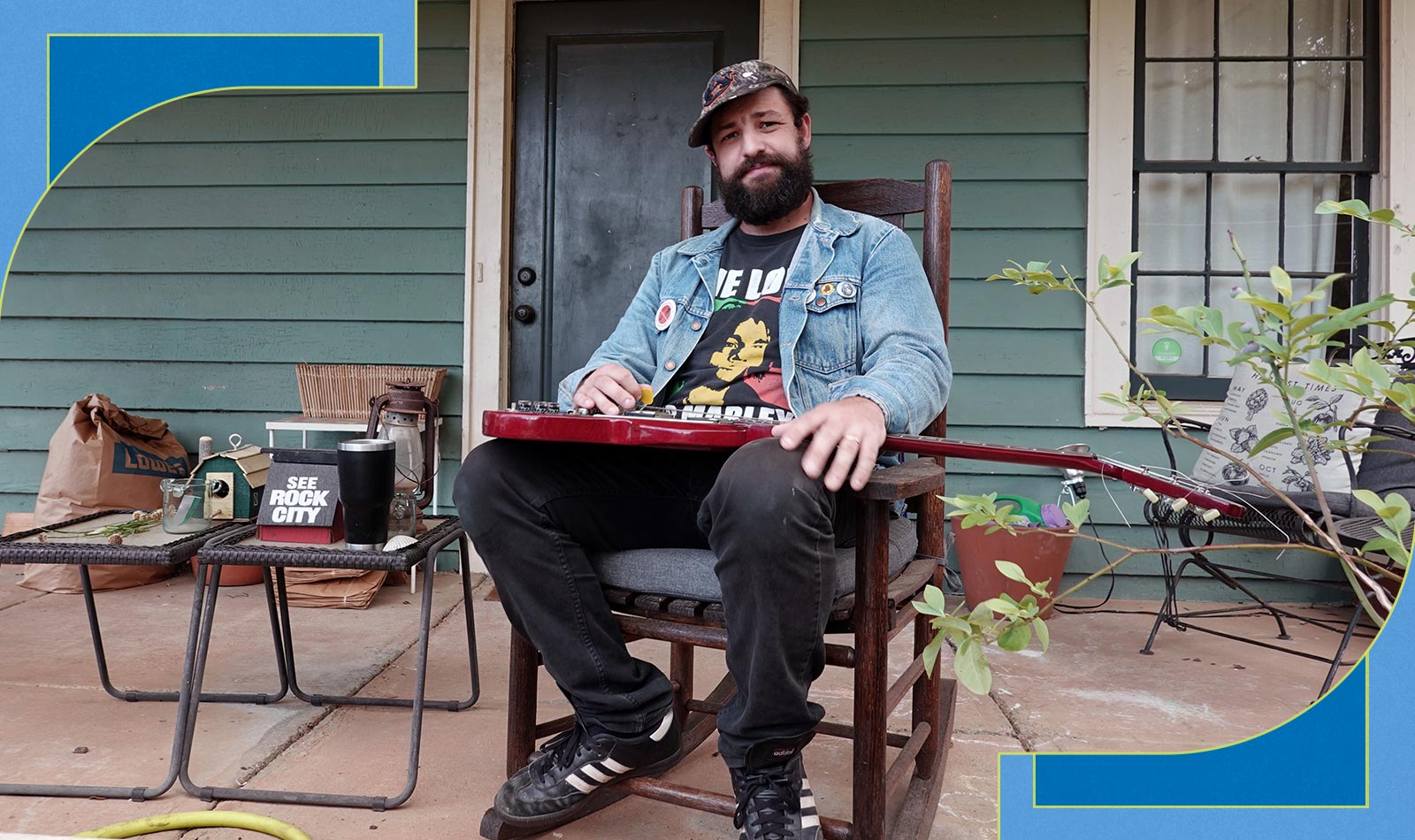 Old-Time Folks, the fourth record from Lee Bains + The Glory Fires, is a sprawling, Southern, punk rock epic about outlaws and revolutionaries from Bains’ home states of Alabama and Georgia. Sometimes, they’re obvious and well-known, like Angela Davis, whose voice opens the record atop organ chords; or Mvskoke poet laureate Joy Harjo, whose words close it out. Other times, they’re obscured and hidden in the back pages of history: “Cherokee and Mayan survivors banging on Appalachian prison bars” or “Communist lawyers and sharecroppers parting courthouse lynch mobs,” Bains recalls on opener “Old-Time Folks (Invocation).”

Then, over a soaring bridge, he broadens the demographic: “This ain’t a brand, this ain’t a look/ This ain’t content, it’s stories/ We’re all stories, we’re old-time folks!”

“In a sense, I guess what I’m suggesting is that we are all old-time folks, whether we want to be or not,” says Bains, speaking over the phone on his lunch break in a carpentry warehouse in Atlanta. “The people I’m trying to pay tribute to and look to for guidance and wisdom on the record are people who had acknowledged that in themselves and these movements of their time. [They] had acknowledged the fact that they, like the rest of us, are just old-time folks.”

While the band’s 2017 record Youth Detention (Nail My Feet Down To The Southside Of Town) mapped the ways that intersecting systems of oppression cropped up in everyday personal life in Birmingham, Old-Time Folks excavates the histories—some ancient, some modern—of resistance on the lands now called Alabama and Georgia. For Bains, these aren’t disconnected, discrete struggles that live in history books. They’re active, never-ending stories of which we’re all a part.

“I think often these types of revolutionary movements or ideas are thought of as coming out of nowhere, and just sort of being these explosions of newness, and what I was really interested in looking at is their connections to a lineage and a past and a sense of belonging to that past, and looking to ancestors and forebears for guidance and inspiration,” says Bains.

Bains says this exploration is also a rejection of the idea that we’re “at the end of history;” and that our current struggles are unprecedented. The reality, he says, is we have blueprints for resistance and struggle that we can reference and call on for strength. “I just think that’s bullshit,” says Bains. “I think that we’re in a continuum of human history.”

To build out the stories that live across Old-Time Folks, Bains read, researched, and traveled around his two home states. His journey was as much a personal pilgrimage as a professional one. “I tend to get energized by stories of peoples’ successes, whatever those may look like: their solidarity, their resistance,” says Bains. “Whether there’s a concrete victory or not, what’s really helpful for me is to hear and see these stories.”

Growing up in Birmingham, Bains knew some of these histories, but others were swept under the rug. He learned about the touchstone moments of the Civil Rights movement in the city, but not the Alabama Sharecroppers Union, or the Southern Textile Workers Strike of 1934, which began in Gadsden and erupted across the Southeast into the largest strike in U.S. history. Bains visited the church where the Lowndes County Freedom Organization met, which inspired the Black Panther Party. “That’s something that isn’t taught to Alabama school children: that the Black Panther Party had its roots in rural Alabama,” says Bains.

He revisited the site of the Battle of Fort Mims, where Creek Mvskoke people fought back against wealthy plantation owner Samuel Mims’ encroachment on their territory. Alabama history told Bains that Mims was a humble homesteader who the Creek ambushed, but when he read further, he learned Mims was running a plantation based on slave labor and stolen Creek land. Moreover, the Creek allowed formerly enslaved people to leave the battle unharmed.

“The more I dug and went to these places, the more I started to absorb this sense that this place and these people here have a long history of sticking together and fighting back against injustice,” says Bains. “That’s really powerful.”

These, too, are traditions of the South, and these are the rich, distinct parts of southern American life that Bains cherishes and celebrates. He says that often, the characters in the stories he researched simply realized that they could align their ideologies with their local cultural and social values—like collectivism, solidarity, consideration of others, and empathy—and do it in a way that subverted the systems hurting their kin. For Bains, that is the essence of his American south, of what it means to be Old-Time Folks.

“That’s the reason I write about my place so much, is that I love it so much,” says Bains. “I just like being here. I like being around these folks.”