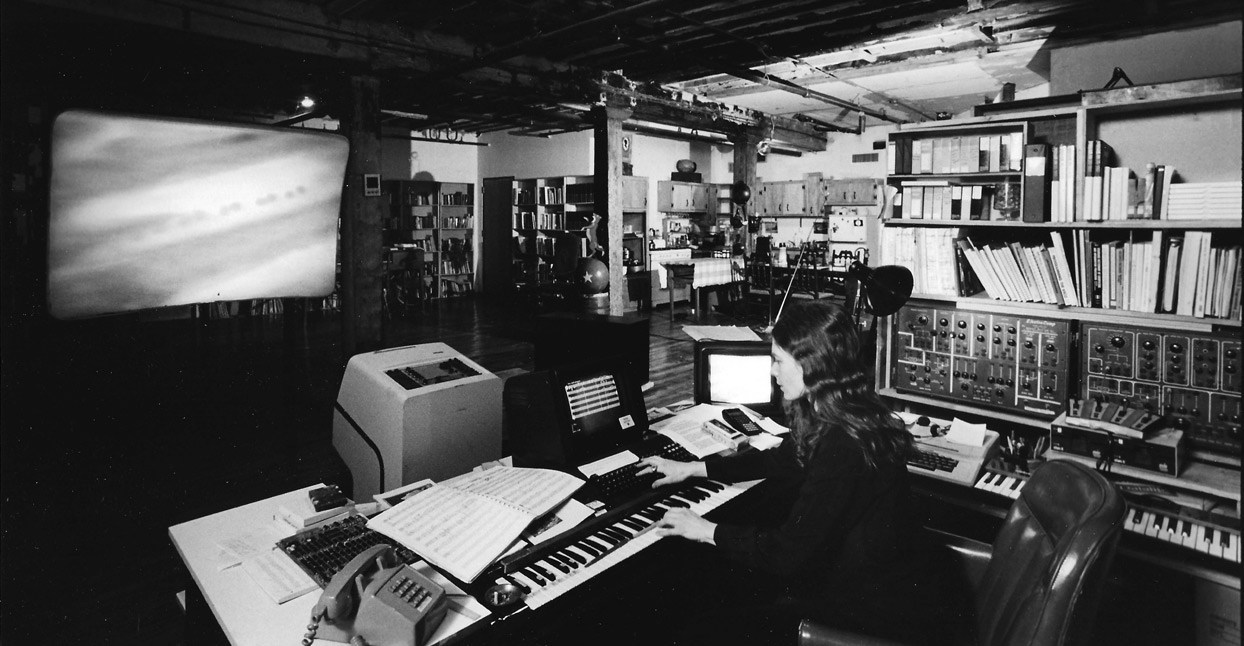 Mapping the impact of the work composer Laurie Spiegel produced during the ‘70s and early ‘80s is a fantastical task—about as fantastical as firing a pair of gold-plated records into space. Actually, maybe it was those Voyager Golden Records, which accompanied the two Voyager spacecraft launched in 1977, that foretold Spiegel’s impact on planet Earth. For those unfamiliar: Spiegel’s electronic interpretation of astronomer Johannes Kepler’s book Harmonices Mundi was included among the songs and bits of recorded sound committed to the Golden Records, which were intended to communicate the human way of life to alien life forms when they were released into the solar system some 40 years ago. But it’s really only been over the last decade that electronic composers here on the ground have begun to grasp the magnitude of Spiegel’s innovative computer-music compositions.

So much of that understanding can be derived from The Expanding Universe, Laurie Spiegel’s 1980 debut album. The record was spontaneously composed by Spiegel between 1974 and 1977, using the GROOVE digital-analog system developed at Bell Laboratories by Max Mathews and F.R. Moore (its name is an acronym for Generated Real-time Operations On Voltage-controlled Equipment). Each of the four pieces on the original release expands and contracts with vibrant, textured harmonies. While the spirited tones of “Patchwork” twirl and dance, “Old Wave,” moves deliberately. Layers of sound mutate from dour to triumphant as they splay and stretch out, one over the other for eternity. Later comes the nearly 30-minute-long title track, the ambient opus that closes the album.

In 2012, Unseen Worlds reissued a deluxe edition of The Expanding Universe—complete with 15 unreleased tracks and a 24-page booklet for the double-CD version. The LP edition of the album includes the four original tracks and “A Folk Study,” as well as a download code for the CD version. On November 16, the label will release a repressing of both the digital and vinyl versions, which have long been sold out.

To better celebrate Spiegel’s accomplishments—and the lasting effect of an album like The Expanding Universe—we reached out to four composers and artists for whom she has provided a touchstone. They offered thoughts on how Spiegel’s work has been realized within their own compositions, either directly or tangentially. As a special foreword, Laurie Spiegel herself contributed a glimpse at the album’s singular construction.

On its initial release, The Expanding Universe had the impact of a mere drop of rain falling into the ocean. A small pressing on the Philo/Rounder folk labels, it fit in no better there than into classical or analog synth or pure drone minimalism. But a few people liked it enough that it survived and eventually it seems to have found its own path in the world.

The music on The Expanding Universe was, and I think perhaps still is, unique in the logic and structures of the actual works—but that doesn’t get talked about as much, even after four decades. The compositional structures of ‘The Orient Express’ and some other works were unique. The technology itself diverts everyone’s attention. Or maybe the lack of written-down scores discourages analysis of how the pieces were built.

It was exhilarating, an actual high, to be interacting with sound on the compositional level—instead of playing individual sounds one by one—and using computers for purposes they were never intended for. In the era when computers still belonged almost entirely to the military and huge corporations, there was something subversive about making music with them.

The years during which the music on The Expanding Universe was unfolding were spent exploring computers and how they could be used when interacting with music’s materials. It was the fascination with that process that kept me at it. The pieces on the album were just byproducts of those incredible first experiences of logic-mediated interaction with sound. The individual compositions were spin-offs made during the exploration—artifacts of the ongoing process.

The equipment may be primitive and limited compared to today’s tech but at the time it was unprecedented. Almost everything you tried was being done for the first time. Often an idea didn’t work, even after months of trying—while sometimes the result was beyond expectations.

As time continues to pass, it becomes more evident to casual music listeners and critics alike that the work of Laurie Spiegel has been markedly influential on a wide variety of electronic musicians, from both the academic and non-academic spheres. Indeed, this long list includes the work of myself, my former band Emeralds, and many of our contemporaries—and we stand with collective appreciation for the enduring legacy of her music. She always strived to find the elusive, gauzy balance between experimentation, intention, and beauty. And though I’ve personally been listening to Spiegel for over a decade, I think her persisting influence goes much further than her recorded output.

Her early embrace of the computer at Bell Labs, her concurrent pursuits in computer graphics, and the development of Music Mouse software each contributed to move composition away from more traditional modes. The last was especially pioneering, because in 1987 music software itself was in an embryonic stage and not a ubiquitous element of the modern recording studio as it is currently. Spiegel didn’t invent digital sequencing, but she pushed MIDI towards something much more expressive—and therefore more human. There is this notion that algorithms are directing our music tastes away from a supposed natural order, but Laurie understood that by using algorithmic logic as an adjunct or automated system in a compositional process, it was actually a mode of freedom rather than limitation.

I first encountered Laurie Spiegel through the Voyager Golden Records. Alongside the sounds of heartbeats and brainwaves, her composition ‘Harmonices Mundi’ (or ‘Music of the Spheres’) was included on the transmission Carl Sagan sent into space in 1977 in an attempt to accurately describe humanity. That composition was inspired by Kepler’s idea of basing music on planetary rotation—perhaps as a way to explain earth time beyond our solar system. I use a sample of Spiegel’s piece, with added effects, in my live performance of the piece ‘Of the Living.’ The sample tape I call ‘MOTSw/E’ for ‘Music of the Spheres with Effects.’

The live performance of ‘Of the Living’ is quite different from the recording on Sacracorpa. It begins with the voiced sigil mantra ‘No Pa Mo’ and high frequencies A and E. It shifts to the sigil ‘No Fu Re’ with added tones G and D, creating a dense cluster of sine waves that are reproduced many times on cassette tape. I slowly cross-fade this noise with the cassette ‘MOTSw/E,’ while at the same time shifting the chord on my Ace Tone organ from G natural minor to B-flat major. I then let the sound rest there and breathe. The final sigil ‘Mi Ti Ra’ takes my focus away from time being marked by the planetary rotation in our solar system and into further space, where Spiegel’s recording is now floating.

In 2015 I was studying music composition at Roosevelt University in Chicago with Don Malone, a composer specializing in Moog synthesizers and interactive programs like Max MSP.

At the time, some of Malone’s students were making algorithmic patches in Max, which intrigued me. Their music was strange and chaotic. I asked Don about the process-based technologies, and he told me that Laurie Spiegel had pioneered the use of algorithmic electronic-music composition with software that she created. I had enjoyed Spiegel’s music, but didn’t know about her contributions to early interactive computer-music technologies.

I researched her work and was amazed at how artfully she composed music. She would create shimmering layers of pulsating tones, each lasting just the right amount of time before dissolving into the next. The music was beautiful and vivid. Sometimes her sounds were tuneful and minimalistic, other times they were unsettling and ethereal with rushes of air sirens or warped sounds.

A few years later, I remember looking at a social media profile of Spiegel’s. Her impressive academic accomplishments were listed. I noticed she studied a subject like anthropology simply out of interest, not for an academic degree. It made me feel a sense of gratitude that this composer, obviously so gifted, seemed curious and open to the world around her.

Despite my delight upon discovering Spiegel’s work and history, I was still somewhat dismayed. How had I not known that a woman had pioneered such important algorithmic/processed-based compositional technology in early electronic music? It’s possible that I was late to know about Speigel’s contributions, but I certainly never read about her in any survey-course literature on music history. She should receive more attention and credit for these achievements, in addition to her beautiful compositions.

When I discovered Spiegel’s work a few years ago, I was really starting to get deeper into my exploration of synthesis and how it related to my process. I felt as though I’d found a kindred spirit in how she was always in dialogue with her instruments, neither one nor the other completely controlling the output. She would write programs on the computers she used to compose to lead down certain paths, but as she explains in the liner notes to Obsolete Systems, the interactions between her and the instruments ‘turned out to be quite an adventure’—which feels very akin to the way I connect with my instruments. I really feel as though I’m in a relationship with my instruments, and we have to come to an agreement on where we end up. This conversation really shows in Spiegel’s pieces, and I hope my work comes across as being similarly organic.

Her breadth of work also inspired me to not focus solely on music—one can more fully realize a complete vision through many different mediums and processes. There is so much power in utilizing both audio and video together, because we experience so much of the world using both senses in conjunction.

As interesting as process is, process alone cannot create a piece that is emotionally riveting. Many pieces have been made from an academic standpoint that I just don’t care about, but Spiegel’s work stands out as music that operates with its own aesthetic merit. Knowing how it was created, however, makes it all the more incredible.