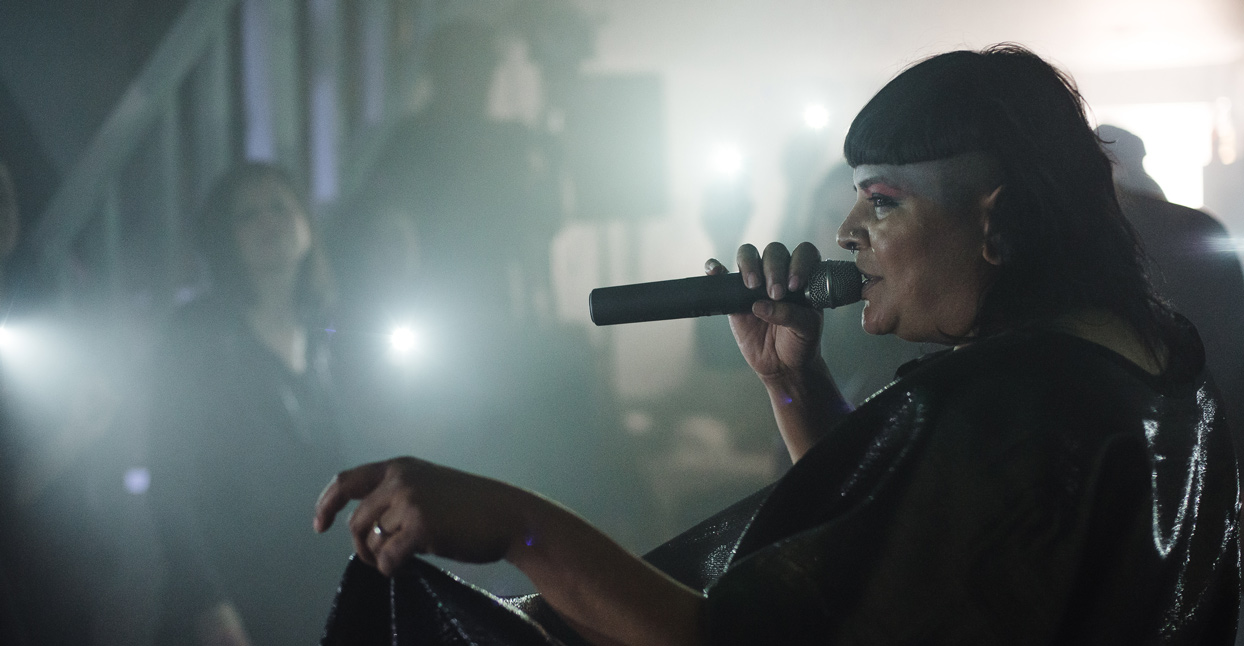 In Toronto, Canada, as in many other cities throughout North America, higher costs of living are forcing artists to relocate and smaller venues to close. DIY space Unit 2 is a rarity in this environment, a space that’s managed to exist so far through 12 years of gentrification and displacement. Unit 2 is run by 20-year veterans of the city’s music scene Rosina Kazi and Nicholas Murray, who perform together as LAL. In the space, Kazi and Murray have found an anchor not only for themselves and their music, but for a greater artistic community.

Doubling as their home and as a venue, Unit 2 is also where LAL recorded their latest album, Dark Beings. The record builds on the themes the duo expressed on 2016’s Find Safety, an explicit love letter to Unit 2 and the community that’s formed around it. “Find Safety is about the space and what was happening in it, and Dark Beings is about the places that we can go,” Kazi explains. “Dark Beings explores this idea of being racialized bodies, and being connected to the earth, the sky, the night. Darkness is always positioned as evil, but I’m highlighting how it is beautiful and magical and necessary.” With production shaped by Murray’s Elektron Analog 4, the beats take on a lithe, dubby quality, sharing the mix equally with Kazi’s smoky, serene vocal poetry.

Kazi came out of the Bangladeshi community in nearby Brampton; arriving in Toronto proper, they dove headfirst into everything the city had to offer musically, from hip-hop and R&B to punk and techno. Born in Barbados, Murray was more explicitly a hip-hop head coming up, being a part of seminal, Juno Award-winning production trio Da Grassroots, but his musical world started to expand upon linking up with Kazi both artistically and romantically in 1999.

Murray recalls a trip to the first ever Detroit Electronic Music Festival shortly after the formation of LAL. “That changed my life, seeing Blackness with techno. Families and kids listening to hard techno,” he recalls. “The way techno was positioned in Canada, it always came across as this white thing,” Kazi adds. Murray cites a later trip to India as similarly eye-opening, saying, “I realized there was a bigger world out there than just pop.”

They established their mercurial, hard-to-categorize sound early on. Their atmospheric, downtempo songs often meant they’d get pigeonholed by critics as “trip-hop.” Their records were released via the electronic and hip-hop minded label Public Transit Recordings, and they made their way through the Canadian folk music festival circuit, finding a perhaps surprisingly receptive audience. “We did really well with our first and second record, and then it was like, we hit this ceiling,” Kazi recalls. “There was nowhere to go in this country.” The constant work of managing, administrating and booking themselves took its toll, leading to burnout. They shifted their priorities and signed the lease for Unit 2.

This period was also marked by self-discovery, with Kazi coming out as nonbinary. This is a moment they describe as transformative, setting them on a path joined with the city’s queer activist community. “I felt like I had to start out again as a musician when I came out,” Kazi admits. “I was able to learn so much about myself and this community I was connected to.”

LAL also found some unlikely inspiration from the theatrical, proggy “noh-wave” act Yamantaka // Sonic Titan, who started using Unit 2 for practices and to stage their videos after member Ange Loft moved in for a time. “We were these old ‘90s fogeys, but they rejuvenated us, only because they were so DIY,” Murray says. The wildly original band shot all their own videos, made all of their own costumes, and did so with a kind of polish that reinvigorated LAL. “It was like a second wind. And even though this is our sixth record coming out, it feels like our second,” Kazi beams.

At the same time, their involvement with the QTBIPOC scene blossomed, and Unit 2 became a hub for queer dance parties, community meetings, and fundraisers for gender-affirming surgeries and organizations like Black Lives Matter and Idle No More. In the years since its opening, they’ve been host to ASL classes, aerialists, Bollywood movie nights, conflict resolution workshops, and more—all by word of mouth.

When they moved in, the street was mostly home warehouses and manufacturing. Now they’re situated near a brewery, one of Canada’s most prominent publishers and Toronto’s Museum of Contemporary Art. Still, LAL feel more connected to their community than ever, thanks to the network of support systems Unit 2 has opened them up to. “I think what keeps us in Toronto is this space,” says Murray. “I don’t think we could live in Toronto if we didn’t live here. The fact that we have people we can call on to help us build things, and vice versa. There’s an ecosystem.”

That, and knowing they’re setting an example for the next generation of musicians that follow them. “Growing up in this city, we came to spaces like this but never saw ourselves in positions of power,” Kazi says. “For this next gen coming up, we want to say, ‘Here’s this space, do whatever the fuck you want. If you need some help, let us know.’ That’s the whole point, to show that you too can build something. We’re not told enough that we can.”