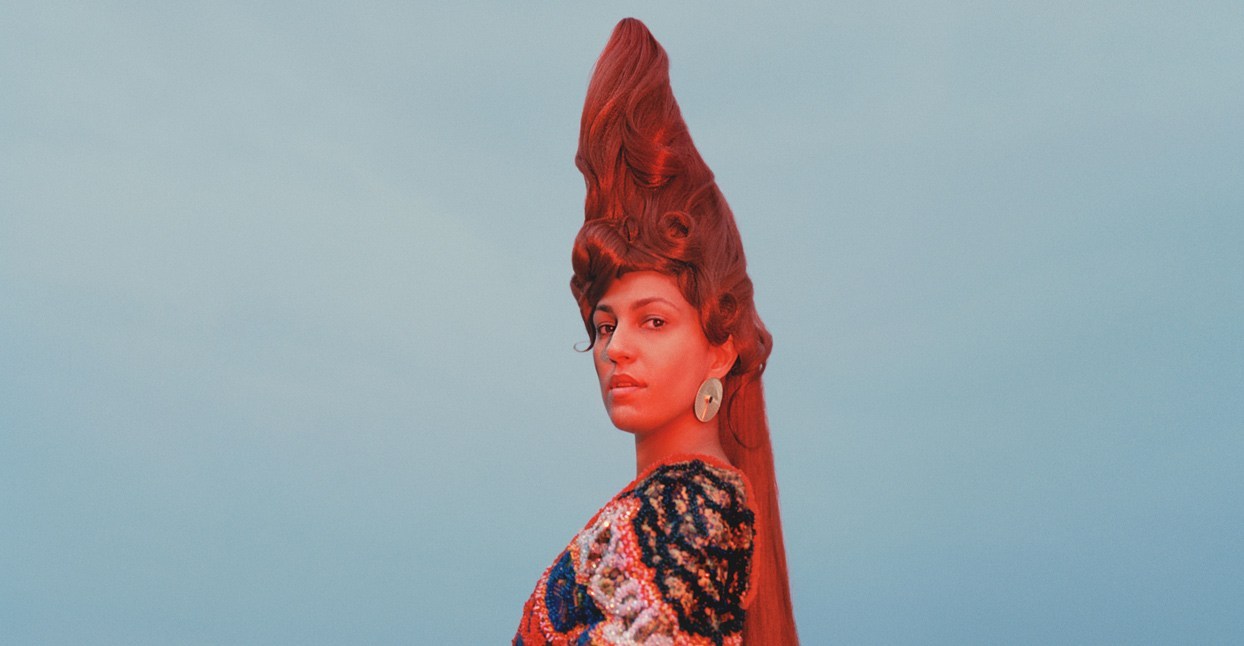 “I wanted to be a butcher,” Lafawndah says, in her tone that’s both solemn and provocative. “I thought meat was very sensual, touching it. I was also very obsessed with cutting and unpacking parts—taking something apart.” That same fascination with “unpacking and taking things apart” extends to the music she makes. Born in France to Egyptian and Iranian parents, Lafawndah, spent much of her childhood surrounded by artists in her grandmother’s home. “Her house was a hub,” Lafawndah says. “It was very much a transgenerational space, a trans-discipline space. There were a lot of filmmakers and writers and poets, very legendary people.”

Lafawndah studied classical music throughout her childhood. She played the flute and performed regularly—and she hated nearly every minute of it. “It was creating a lot of anxiety for me to be on stage,” she says. “I really didn’t like the sound, but I couldn’t quite formulate that for myself. It became obvious later that I didn’t really like high-pitched sounds and frequencies.” It was during a “free music” school assignment, where she performed a cover of Jamiroquai’s “Virtual Insanity,” that she discovered she could sing, and began to feel her anxiety dissipate for the first time.

It is that friction that characterized her first two EPs, Lafawndah and Tan, and it continues to play a role in her full-length debut, Ancestor Boy. On tracks like the staccato, spastic opener “Uniform” and the cold-industrial-meets-sitar-music “Ancestor Boy,” sounds seem to crash into one another. It’s a kind of global exploration, challenging traditional takes on electronic and pop music. Any one track on Ancestor Boy feels like five songs in one; yet these disparate elements puzzle their way together to create a sound that is dynamic and unique.

“The focus was to unearth a sonic language that lives somewhere in between—it’s not all the way machine, and not all the way real life. A lot of that balance was found by using real instruments or electronic [beats], but the way we used them never fit in one camp or the other. It’s the same with how we used signifiers—I never went for sounds that were too charged, or that were too referential, where you can just sink into something. If I did, it was just an accent or nod to play around with—letting you think that you’re going to sit somewhere, but then taking it back from you. There’s a lot of deliberateness in these choices that reflects the way that I feel,” she says.

Much of the way Lafawndah feels comes from a life spent living elsewhere, from Paris and Tehran to New York and Mexico. Music journalists have often painted her as an exotic nomad, a description she considers shallow. “There is a language around difference—a kind of visibility around it now, that is [being] capitalized on, and I feel even more isolated. The ways in which these differences are understood is just so rigid. It doesn’t really reflect the truth of humanity, which is that people have always moved.  That’s the truth of us. It’s the truth of DNA, anyone and everyone. I think the history of humanity goes against so many political interests, the main one being “state” and the idea of country and national identity. My trajectory makes it such that I’ve felt—in the deepest ways—that I don’t fit in. Not only geographical ways. I’m talking about movement that I don’t even have access to. It’s something I’m hoping I can open the conversation through music,” she says.

This internal searching bleeds into her sound. As a young brown girl drawn to whimsy and fantasy, she often felt that kind of restless imagination was denied to her.

“[In art], there was often a choice that needed to be made between imagination and reality. Brown people were always asked to make an account of their real lives. I struggled with that, because it was almost like imagination was not a right that I had, and I didn’t really connect with giving an account—with realism. Like, ‘This is how I grew up. This was hard. And I didn’t have money.’”

And while she hopes that her art is a balm for those who long for new spaces to belong, her goal is to connect through a variety of mediums.

“Some people are defined by being musicians. I’m defined by wanting to communicate with the greatest number of people that I can. Music is one of those ways, but there are many ways that I’m using to do that. It’s important to recognize the people who don’t feel like they are fitting into pre-existing spaces.”