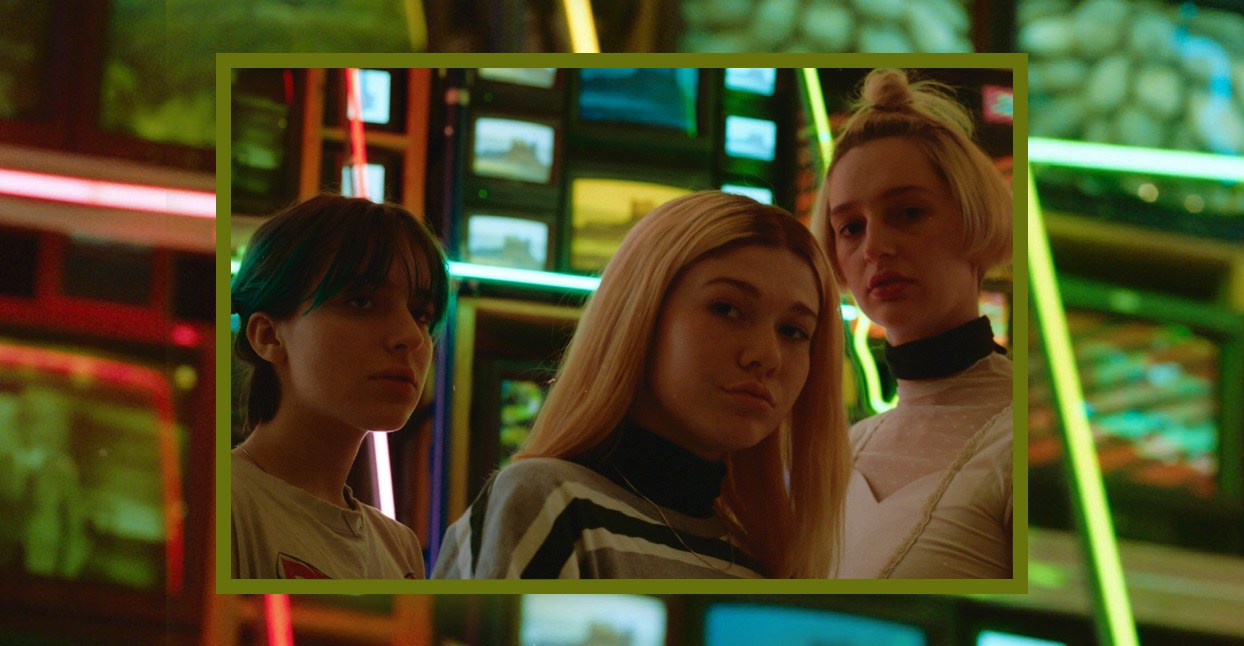 “I don’t want you to like me / I just need you to blow me” is probably the last thing someone visiting the Smithsonian American Art Museum would expect to hear echoing through the halls of the prestigious institution. So when Knife Wife took the stage last March as part of a Luce Unplugged concert series and sang exactly that, the result was—to say the least—amusingly incongruous. But Knife Wife’s deadpan delivery of explicit content wasn’t the only shocker; the band’s age was, too—two of its members are still in high school. Their raw energy and blatant disregard for their home city’s often sterile professionalism brings to mind the legendary history of D.C. punk in the ‘80s.

Knife Wife’s Sami Cola, Nico Castleman, and Ruby Parrish describe their music as a “castrated Sonic Youth cure” or “a fucked-up nursery rhyme.” Their sound is minimal—guitar and bass often act in unison, punctuated by sparse drums. But the arrangement feels anything but haphazard. Though the individual parts are relatively straightforward, they artfully interlock to create a sound that is larger than the sum of its parts—dark and jagged, simple but grotesque.

The trio has described their debut album, Family Party, as “the regurgitation of the tear-inducing boredom and ecstasy that is being 15 years old.” The nightmarish scenarios that play out in the group’s lyrics are often metaphors for what is commonly known as “teen angst”—lust gets distorted into a visceral tableau that verges on body-horror. A make-out session gets weird on “Silly Pony,” as Parrish sings, “I’ll lick every tooth in your mouth / Even the ones that haven’t started to grow.” And daydreaming is taken all too literally, as Castleman collages photos of a lover to the insides of her eyelids on the album’s opening track, “Dreamland.”

Family Party’s songs are plastered with images of sweat, snot, and spit, but while the lyrics tend towards the surreal, beneath the fiction are glimpses of mundane high school reality. The band’s warped songwriting style provides a lens through which the band can filter everyday experience, staying true to life without veering diaristic. “It’s kind of just a style of writing that lets me talk about my life in a way that’s not purely autobiographical,” says Castleman. On “Fruity Void,” Castleman delivers a warped account of a superficial crush in monotone over a sparkly synth loop. And while it may appear nonsensical at first glance, “Dogs” is Parrish’s account of a “scary and formative party” she attended.

Growing up in the Washington, D.C. scene, it would have been easy for the group to be swallowed by the shadow of history. As the home of Dischord Records and one of the first hubs of the riot grrrl movement, D.C. was ground zero for hardcore and punk in the ‘80s and ‘90s. But Knife Wife are neither directly influenced nor intimidated by their predecessors. “We don’t really think about that,” says Cola. “I feel like what we’re doing is separate from the punk scene. It seems like people really want us to talk about the fabled D.C. music scene, but the truth is while we respect it, we aren’t in relationship with it.”

While the nonplussed vocals on Family Party might suggest an attitude of apathy, Knife Wife are enthusiastic about what is happening in their local scene. Rather than drawing inspiration from their musical forerunners, the band see themselves as part of something new, citing bands like Clear Channel, Des Demonas, and the P0STB1NARY collective as role models. “We could all learn a thing or two from them,” says Cola.