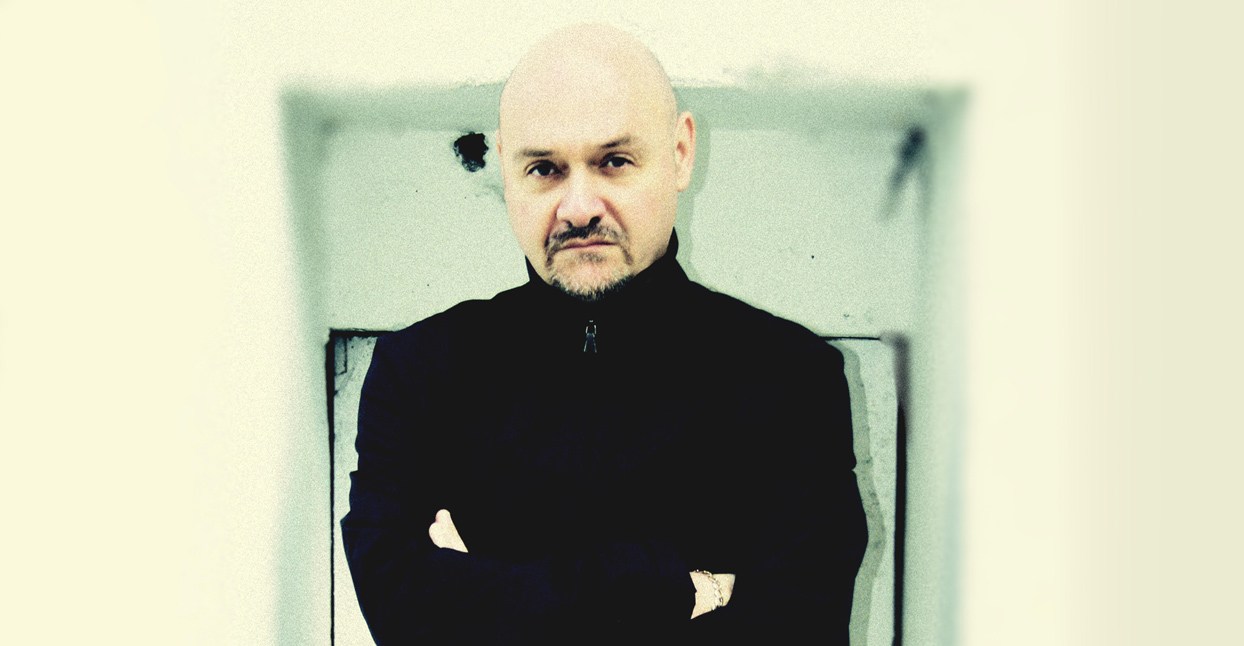 Kirk Degiorgio is one of the great connectors of U.K. dance music. When rave first swept the country, he was flying the flag for refined—but still weird and discombobulating—electronic music. Working with the Detroit techno originators, with many of the core artists on WARP and Rephlex, he helped assemble a network of mavericks. But he wasn’t just about techno by any means: Degiorgio was a fan of old soul music before acid house—which draws heavily on the genre—even arrived in the U.K. He’s also a scholar of jazz, funk, and Latin music, frequently both writing about it and playing it.

His own productions were absolutely vital in that early era of dance music—and they remain so now, because he is as prolific as ever in many different styles. Among his many aliases, his As One guise is the most famous. The records he released under that moniker through the ‘90s and into the early ‘00s are considered stone cold classics, and it’s no wonder that they’re still in demand. Degiorgio has also revived the alias for the first new As One album in 15 years, Communion, due out towards the end of this year. We caught up with him to find out what was driving this wave of activity.

The big one is: why now? Why have you chosen to revive the As One alias?

A couple of things happened recently. First, the venue the Pickle Factory in London asked me to perform my early As One tracks live. Since there are no MIDI or audio parts from those days—roughly from 1991to1994—I ended up recreating every track from scratch. I really enjoyed hunting down original drum samples and transcribing and repatching all the elements. It was too complicated to perform alone, so my partner Catherine joined me on drum and percussion duties, which worked really well. We’ve since performed the show at Concrete, Paris, Pickle Factory again, Paaspop Festival in Holland, etc.

Secondly, the copyrights for the first four As One albums have now reverted back to my ownership. I remastered them all for digital only release a few years ago—that became Thology Vols. 1-4—but vinyl has made a good comeback recently, and I was getting a lot of requests to release the early albums in their original vinyl formats. Thanks to Ken Hidaka and Shuhei in Tokyo, the original artwork was discovered from when the CDs were reissued in the 2000s in Japan. So it seems universal forces were telling me As One was returning!

What separates As One from your other projects?

Musically, it hovers over that tricky border between being clubby enough for dancefloors but musical enough for repeated home listening. It’s also more obviously influenced by my years immersed in soul, funk, jazz, etc. That was the concept behind the name—all my influences coming together ‘As One.’

Do you remember much of the recording process?

Reflections was mostly recorded in 1993 and early 1994. I was sharing a lovely house in Waterloo, London at the time, right behind the Southbank Centre. It was a tiny room and I had to put my mixer and massive Oberheim OB-8 synth on the floor. You had to step over the OB-8 to get into the room! I was reading a lot at the time, as usual, particularly travel books, so there are tracks about the Moab mountains in the Judean desert, Uighurs and the Taklamakan desert in China, etc. Film also played a large part—’Asa Nisa Masa’ was influenced by a segment in Fellini’s 8½.

You were an early adopter when it came to Detroit techno. What was your epiphany, and how did you start forging direct connections with the actual Detroit musicians?

It was scanning the label credits on Metroplex releases like Model 500’s ‘Off To Battle’ and seeing the name Juan Atkins. I was a massive Electro fan—I was one of the few soul boys who didn’t reject it as an abomination!—and I loved Cybotron, so that was my connection. Derrick May’s It Is What It Is EP sealed the deal. It’s still my favorite Techno record ever.

I went to see [Kevin Saunderson’s] Inner City at London’s Town & Country Club venue, and I was approached by Derrick May, who enquired about the Transmat T-shirt I was proudly wearing. We got chatting—he was the warm up DJ and support act. I was working at the second-hand record store, Reckless Records, at the time and when I told Derrick I was flying out to Chicago to buy rare soul and jazz albums for the shop, he gave me his address and told me to hire a car and make the drive over to Detroit where he’d take me to some record stores. I did exactly this with a couple of friends. But as it happened, Derrick was still in Europe. Fortunately, Juan and Anthony Shakir were at the studio complex at Gratiot Avenue, and we spent a couple of days hanging out with them.

The early ‘90s electronica scene in London was fascinating. There wasn’t really any one center—it overlapped with hippie clubs, ambient, techno, and much more. Record stores and odd squat parties were just as important as clubs. Where did you fit in?

I was very busy working in Reckless. We had the best collection of rare House and Techno in Europe at that time. I had no musical training or formal studio experience, but I found myself with a debut single signed to B12, then my follow up signed by both Planet E in Detroit and R&S. I had a label [ART aka Applied Rhythmic Technology] that had released tracks by The Black Dog, and I was putting together The Philosophy Of Sound & Machine with Grant Wilson-Claridge which contained early Aphex Twin tracks. It was all a bit hectic. I just remember either being in Reckless, Black Market or Fat Cat records – and if not, I was at home reading manuals for samplers, drum machines and synths.

Previously, I was a regular clubber, but during that period I had very little time, and the music and vibe had changed from the rave days of the late ‘80s—and not in a direction I particularly liked. Lots of bad pre-jungle rave, and good American house had mellowed out into a ‘smooth jazz’ direction. But there were little gems here and there: Colin Dale would put on great nights, Eddie Richards and Mr. C’s Release parties and, best of all, LOST. Our little U.K. techno scene, plus a few labels from Europe such as Eevo-Lute, R&S, Basic Channel, really did seem to be where the innovation was happening.

Who did you consider your most important contemporaries back then?

Derrick and Carl Craig. No question. Carl was the one who I believed was on the right track musically. Derrick seemed a bit down on the music business side of things after a proposed deal with ZTT fell though, and his incredible releases like ‘Icon’ and ‘The Beginning’ seemed to go over people’s heads. But Carl was always inspiring both as an artist, and with his vision and plans for his Planet E. label. I was very close with B12—particularly Mike Golding—at this time. They were instrumental in helping me launch my ART label: giving me the contacts for mastering, pressing, artwork, etc.

Your music covers soul-jazz-disco, techno, electronica, Brazilian grooves, and a lot more. Has that diversity made life easier or harder for you?

I think it’s balanced itself out. It’s definitely made me hard to categorize, which makes it hard to have a media profile, but I’ve got a wider fanbase than artists who stick to one genre. I remember one night driving to Fabric to play banging Techno in Room Two and hearing Bob Harris was playing my Beauty Room project on [BBC oldies station] Radio 2! Not many artists can claim that diversity. I often joke that every time I post a particular favourite mid ‘70s soul ballad on social media, I lose a few IDM fans.

Has revisiting your old stuff influenced your new material? What we’ve heard of the upcoming album certainly has that cosmic ‘90s flavor…

Yes, it was definitely inspired by the renewed interest in my early works. It has a similar aesthetic and sonic palette but with all the experience of 25 years of studio experience added into the mix!

Is it important to you to follow the various newer threads of electronic music?

Definitely. I listen to a lot of grime, as well as bass artists. It’s where a lot of the innovation is right now, and has been for years. London Modular Alliance cross into that territory, and I hope to release more of that type of music. I have unreleased material in other genres too—drum & bass for example. Just need the right time to release them.

You’ve never been afraid of being outspoken about politics in and out of the music industry—do you feel electronic music should be more politicized?

Well, I was born into an East End Jewish family, so radical politics and arguing is in the blood. To be honest, I’ve always felt politically homeless, and I think for decades now our politicians are an absolute shambles. I pretty much hate the lot of them! As for musicians being more outspoken—in theory this should be obviously ‘yes,’ but judging by the horrendous views of many of our ‘esteemed’ artists/producers on social media, then perhaps not!