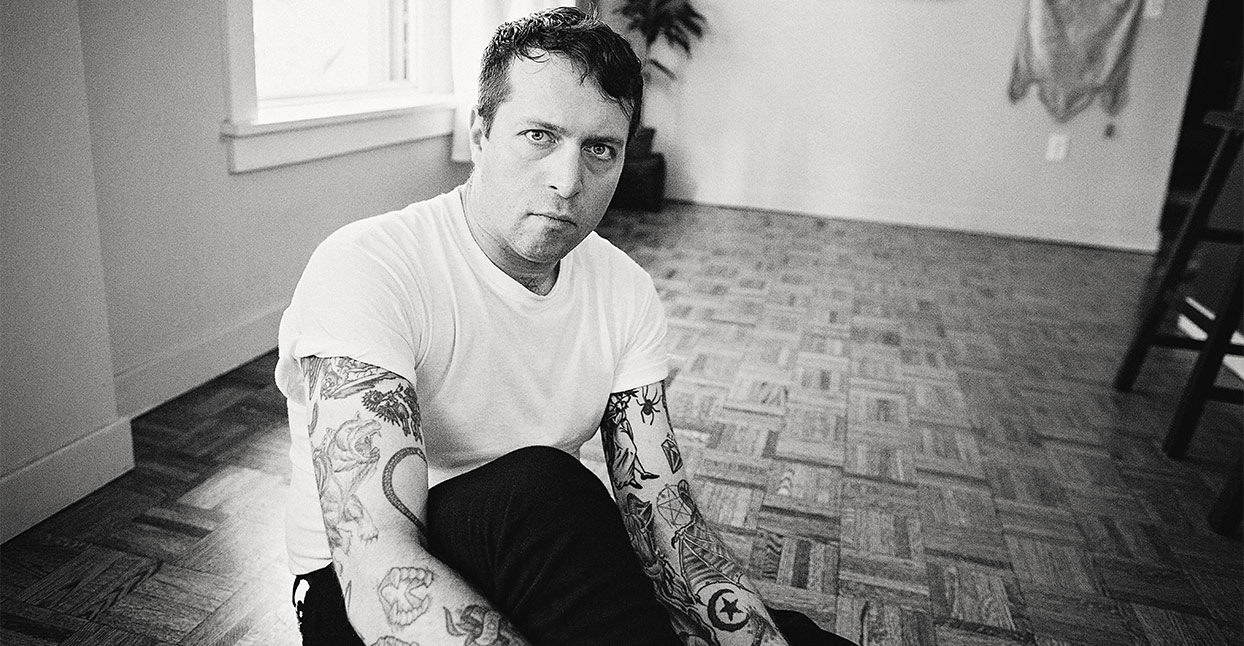 Now far removed from his days in hardcore outfit Teen Cthulhu and the blackened death metal group Book of Black Earth, TJ Cowgill has been making somber, emotional music under the name King Dude since his 2010 album Tonight’s Special Death. Some have called what Cowgill does “Southern gothic” (even though he’s from Seattle), placing him in the same loose tradition as artists like 16 Horsepower/Wovenhand, who draw from country and blues, but drape it all in black lace.

His latest release, Sex, is the third entry in what will eventually be a four-part series. It shares themes with its predecessors, 2011’s Love and 2014’s Fear, and all three albums offer subtle hints about the theme of the fourth. Sex is a work of harrowing beauty, one that deals forthrightly with everything from ritual sex and religion to feminism and mortality.

In advance of its release, we sat down with Cowgill to discuss the themes and ideas that crop up throughout the record.

Since it comes up so often in your work, I thought we could just start right out of the gate by talking about religion.

I’m definitely not a Satanist, but we can certainly talk about Satanism. I consider myself a Luciferian. Some Luciferians might consider themselves a type of Satanist, but Satanism and Christianity and any other religious experience are really distant cousins. The main difference is that I try to find commonality. I don’t like to be considered a Satanist, because I don’t like the idea that my religion is right and your religion is wrong. I have quite the opposite feeling. I have a feeling that if one is religious and actually practices the core tenets of their faith correctly, then they are probably a good person. And I feel like that’s the kind of person I am as well.

So, obviously religion plays a part in this album. Do you consider this a concept album?

I’ve been asked that before, and I don’t. But I do think other people will. Because, like many of my albums, this one has big themes. There’s one overarching theme, and then maybe some sub-themes that make the album cohesive. But concept albums tend to be about one character doing one thing throughout the entire album. This isn’t that kind of album.

There are certainly references to historical figures. Charles Manson is referenced often, as are the girls from his family. But it’s never an individual story, or even their story. They just seemed like the perfect place to find inspiration when you’re going to make an album about sex. And the album is about sex but it’s not solely about sex. It’s about sex in our society—maybe the Western interpretation of sex. I thought, ‘How about a sexually liberated cult that I’m interested already, in which women end up going to prison for murders they committed, while the man goes to prison for murders he didn’t commit.’ Obviously, there’s mind control and dominance and psychedelic drugs involved as well.

So you jumped into something I wanted to talk about: Do you see American society and western culture as sexually liberated, or are we still tied to a Puritanical past?

In some ways we are very progressive, and in other ways, we are very backwards. And there’s so much work to be done still that I think it would be wrong for people to say, ‘We’ve got it’—like we’re finally free from any sort of old hangups. The worst thing about Western society’s view on sex is how we have our own sense of it—our own sense of whether it’s right or wrong. I don’t see that we’ve made progress there. I don’t understand why people are so concerned about why or how people define themselves sexually, or how they choose to have sex. I can’t believe that’s a debated subject in this day and age. You know, there are other societies that don’t have our hangups, and they’re doing fine. I think America is a great country, but it’s also very varied. It’s a kaleidoscope of people, which drives home my point that we need to celebrate other views.

I was wondering how the song “Sex Dungeon” fits into the record. It’s so dark.

I actually wrote those lyrics inside the Vatican City. I was traveling on vacation, and the song just occurred to me. It’s more about a band or a group of people who are saying that they are [called] Sex Dungeon. The song is supposed to be stupid—it’s not supposed to come across as thoughtful. It should be dark and ignorant. Not really to be intellectualized. But it does represent the bestial part of sex. It’s confusing and it’s a little clandestine. The group really doesn’t know what they are talking about. Are they Sex Dungeon from the USA? Maybe they want to separate themselves to not be confused with another group called Sex Dungeon.

I was listening to a lot of Leather Nun at the time, and I wanted that punched-up kind of production. The drums are really compressed sounding, and the guitar solo is done in a deliberately stupid way, like you might hear in ‘70s rock. The overdubs and the cuts are there on purpose. It’s meant to sound stupid.

So if “Sex Dungeon” is one end of the spectrum, what track represents the opposite end?

The final track, “Shine Your Light.” It’s more about finding that spiritual connection. Not only that spiritual connection through sexuality, but also through a male’s submission in sexuality. So it’s a bit of a torch song, where he’s saying he will do anything, even be used by her or whomever so long as he gets that feeling by giving himself over. Int a way it’s Christ-like, giving yourself over to a being. You can gain a lot of power through giving yourself over completely. We don’t have a lot of torch songs that are written from this angle, so I thought about how it might be important to have a song like this from a male perspective, where the male it becoming submissive.

Do you try to write from an angle advocating female empowerment?

As much as I can. I would be wrong to say that I know how a woman feels. Basically, I always just make sure I research the position from which I’m writing. I try to put myself in their position and meditate on it to the point where you feel like you have a good understanding of the position before you even sit down to write the lyrics and songs. I was raised by a really strong woman, a single mother who put herself through college by being a waitress so that she could eventually become an aircraft mechanic. She worked in a very male-driven industry in the ‘80s and ‘90s.

I mean, a song only has about 100 words or so, and some of those words are repeated—unless we are talking about Meatloaf, of course. His songs had thousands of words. It’s crazy. He tells you everything about his day in his songs. He sings, like, ‘I went to the store to buy some eggs/ but they didn’t have any eggs so I went to another store…’ Bruce Springsteen is like that as well. Just a great writer. I feel like when I write, and I’m not anywhere near their level, I just try and write a ton of backstory for the song, lyrics that won’t even make it in, just to contextualize what I do end up with. The core of the narrative is there, or maybe you come into the story at a certain part, and that part is the song, but there’s a whole backstory in my head that helps me get to that perspective.

The albums Fear and Love are similar in that you don’t have one set concept, but you have an overarching theme that you’re going for.

Absolutely. And I would consider those albums part of the same incomplete work in progress. Not every album is like that, but Fear and Love and Sex are certainly part of something. The other albums in between give me a break from that more rigid mindset. So those albums have fewer parameters than these. Fear, Love and Sex are part of a series that is incomplete until I release my next album. And then, people will know what my inspiration was for this whole series. It will be a bit of a reveal. That’s the plan, if I don’t die before it’s put out. It’s known to some people, but I really want it to be a surprise. Some people have already guessed it, and that’s really fun, because it means that my music is reaching the right people. Some of my fans are getting the hidden theme that will connect the four albums together. And it’s not that clever, it’s just that when you work in a regimented style, which helps someone with my personality type, you have this goal. I talk to plenty of bands who say they don’t know when or what their next album will be. Well, I can tell you, down to the month, when the last album in this cycle will come out. And I probably could have told you that information two or three years ago.

It’s kind of like that scene in Bottle Rocket when they help Dignan break out of his hospital, and Dignan has his 10-year plan written down in his notebook in markers and crayons. That’s kind of how I feel. I have a 10-year plan, but I’ve been writing it down all sloppily.

So to continue the idea of thematic interplay: Where’s the Venn Diagram between love, sex, and fear?

They’re all pretty common human emotions and are all facets of the human experience. All three are integral to life. I don’t think you can have a complete life without having each one of those experiences. So, they’re important, and that’s basically what ties them together. They’re very important, but for different reasons. The more people meditate on these subjects, they begin to get a higher quality of life just through gained perspective and knowledge. Not just like, what makes people want to have sex and fall in love, but what makes you want to have sex and fall in love. What makes you fearful? Your life is never really complete. Life is all about the journey, and through understanding that better, you can become better at all these things.

I’m not trying to get rid of fear and I’m not trying to get rid of love, but I think through understanding it better, you can come to a place where you’re better at both of them. Sex is another one of those things. I think sex is important, considering the power that lies within it—you know, from the creation of a human being to hurting someone for the rest of their entire life. And that happens to people every day. That’s crazy, right? We kind of just go, ‘Oh, it’s not really a big deal.” Well, I think it’s a huge deal. And since sex is taboo, it’s not really discussed. So I have to speak and be honest and tell the truth as I know it. I don’t consider myself an extremely intelligent person. I never had any education past high school. I read, a I lot and try to understand things intuitively. And there’s always room to improve. Always.