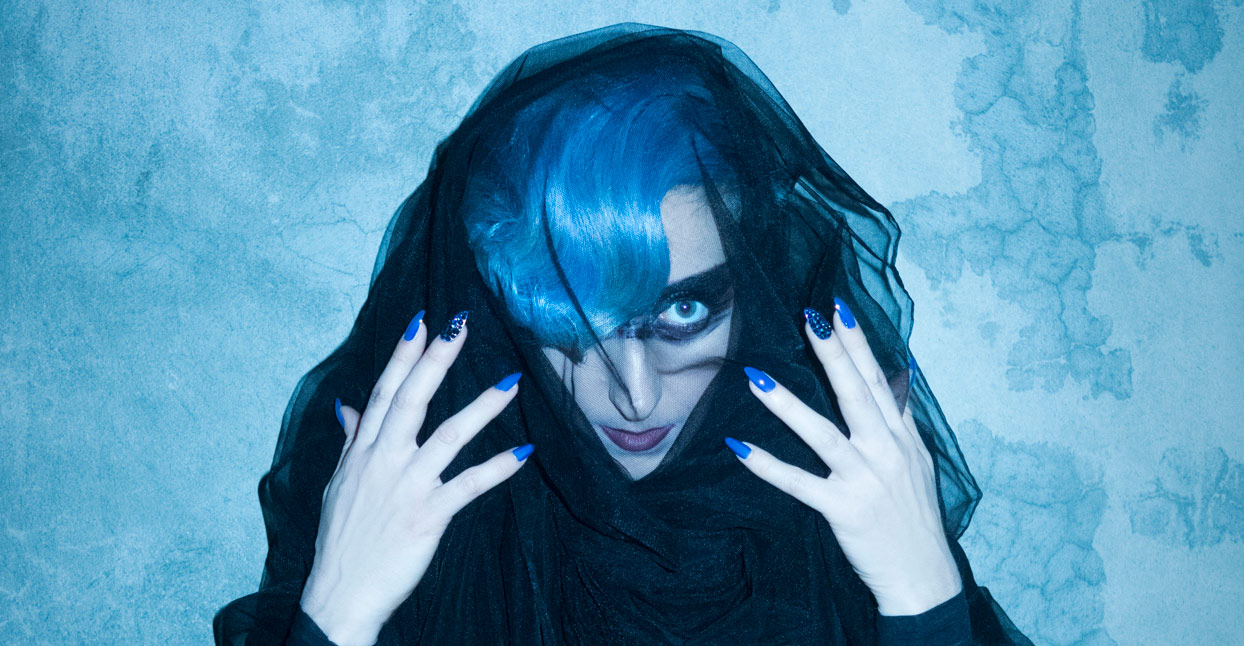 Kim Boekbinder doesn’t like waiting for permission. The New York-based musician and self-styled “creative anarchist” has made a habit of circumventing prohibitive industry standards. In 2011, rather than wait for approval to book venues, she devised her own “pre-sold tour” by crowdfunding tour dates in various cities, and booking venues based on how many pre-sold tickets she accrued in each city. She started her own label this past April. She’s made a habit of carving out sustainable, artist-friendly alternatives for thinking and creating.

“I’m a very impatient person,” she says plainly, laughing. “I get frustrated when I come up against boundaries.” Boekbinder considers herself a “sound sculptor,” shaping rich, throbbing tones over which to relay her vision of non-traditional hierarchies and unbridled independence. Her new record, Noisewitch, embodies that indignant rejection of restrictions: “I’m the head bitch in charge,” Boekbinder states triumphantly on the first single, “H.B.I.C.” It’s a phrase repeated over and over, looped on a bed of resonant synths and industrial beats. The repetition drives the sentiment home, embedding it like a shapeless idea that, if spoken over and over, might become reality.

There are so many plural perspectives and nuances on the new record. Were there any particular touchstones that influenced it?

Well, it’s called Noisewitch because, a couple of years ago, I was singing a song from my last album. The song is called ‘Hand To Mouth’ and it’s about struggling as an artist, and I just thought, ‘What if I’m continuing this struggle by continuing to sing about it?’ I was thinking about the power that songs have in our lives. They are incantations. There are spells we put on a song to make something happen in the world. We put on a song to focus, to work, to make people dance, to have sex, to calm down, to get excited, and I decided to write Noisewitch with the intention that all of these songs were spells. I wanted to write about things that I wanted to see in the world.

I think it’s neat that songs like ‘The World Is Mine’ function as a rallying call to other artists, too.

Definitely. I was feeling a little bit of a lack of confidence at the time, as we all do, and certainly artists feel impostor syndrome all the way through their careers. Very successful people still feel like they somehow tricked the world and don’t really belong. When I was writing this song, I just thought, ‘What would a man write? The cartoon version of male privilege, what would that be?’ What I wrote was ‘The World Is Mine.’

The lyrics are, ‘I belong here, everywhere, every time.’ It sort of has two meanings, and one of them is feeling like I belong, and I feel very confident when I sing this song. I just have to fully 100% commit to being in this space and believing that the world is mine. But then there’s also this realization that because I wrote it from this point of privilege, I was like, ‘Oh, but there are also points in which I am this person who is actually taking stuff and maybe I can see this song as both an invitation for myself to take up more space and an invitation to recognize where I’m taking up too much space.’

That deconstructive lens seems to be central to a lot of your work.

Definitely true. These are all things that are really important for me: that everything is nuanced, and everything is layered, and even when I’m making a really strong declarative statement like, ‘The world is mine, and I’m gonna take up more space,’ then I’m at the same time going, ‘I’m gonna take up space until I don’t need it and then I’ll give it to somebody else who needs it.’ Fundamentally, as a person, as an artist, I do believe in flexible hierarchies, and I use them creatively in my own works and also in my life. Sometimes I’m the ‘Head Bitch In Charge,’ and I don’t always have to be. Sometimes, somebody else is the ‘Head Bitch In Charge,’ and that is great. Every situation has a different person who should be leading the way.

I was wondering if you thought people were becoming more willing to operate outside of traditionalist hierarchies.

I really hope so, and I do still have a lot of hope for the future. When I hang out with teenagers and listen to what they believe and have to say, it does seem absolutely possible that traditional gender roles are being thought of in different ways by young people who are rejecting these things before they really take a hold. At the same time, the entire world seems to be rolling towards fascism again in this really terrifying way, and I don’t know whether this is the last gasp of a dying culture. Is fascism just always what politics is going to coalesce into, and then millions of people have to die for us to break it apart, and then we can have a little bit of personal freedom again? I hope that we can figure out a way to all survive and express ourselves as humans without having to kill each other, but right now everything seems so bleak.

The album was supposed to come out in February, but it seemed inconceivable to think about releasing anything at that time. But now, my album is really political. What I wanted to write is something that’s really fun, and really engaging, and you don’t have to think about the politics of it, but the politics are there. That kind of art to me is so powerful.

Metrics of success and feelings of accomplishment are pretty disparate. For you, is there a difference between being compensated and being successful?

Actually, I wish there were a little bit more of a correlation for me. I have to care about money. The sad thing is that if you can’t support yourself off of your art and your quality of life is suffering, you do feel like a failure. If you’re stressing out and you can’t pay rent and you can’t enjoy your life cause you don’t have any money, it’s hard to feel like your art is good. That’s a cultural problem that we have.

I’m very hard on myself, so I tend to never think I’m doing well enough, and sometimes will get frustrated when people tell me that I’m successful. I’m sort of like, ‘How dare you accuse me of being successful! Can’t you tell I’m failing?!’ With other people, I’m like, ‘If your art has reached a single person and changed a single life, then you are successful.’ But with myself, I’m like, ‘No way, I need way more than that.’

Conversations about money and art are stigmatized and insulated from one another. Have you encountered difficulty discussing the two together?

Definitely. Artists are never supposed to be advocating for themselves financially, which is why we have agents and labels and all of these people between us and the audience. We talk about how the internet took all that away, and that’s really great, but then when an artist says, ‘Hey, can you pay me?’ the audience gets really upset. If I have advice for younger artists, it’s do not be afraid of money. Don’t shy away from it, don’t think it’s shameful. You don’t have to romanticize it or fetishize it. You can just be like, ‘I need to get paid.’

For every hour of show, there’s like 200 hours of everything else. So your $15 ticket to come see my show is actually paying for 200 hours that led up to this. It’s not sexy or glamorous to talk about the actual business of what it takes to put out a song. It’s really easy to ignore that labor because we’re all ignoring it.