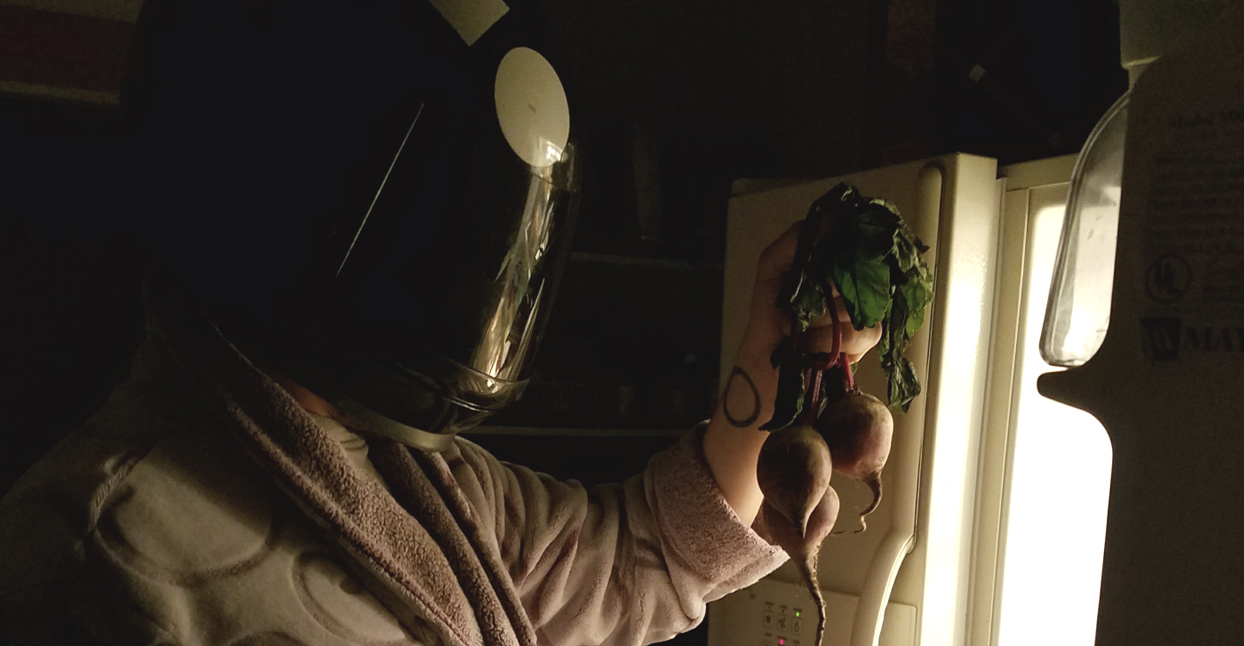 The mysterious Breakmaster Cylinder, a composer with a closely-guarded identity, has been crafting elaborate, demented beats for close to a decade. In the era of the overshare, Breakmaster appear in photos wearing a black mask with white bug eyes, their features obscured; sometimes Breakmaster clearly make themselves to appear as a woman, sometimes a man. They do not do in-person or phone interviews, but is easily accessible to fans, and responds to just about every comment made on their releases.

It’s no surprise that someone who dedicates their free time to beatmaking would worship at the altar of J Dilla, but Breakmaster Cylinder also has an obsession with Bach and other classical music composers whose music is hardly obvious sample material. Their wicked sense of humor masks the prodigious technique and craft in their endless catalogue of two-minute micro-symphonies (Breakmaster is also a proficient keyboard player). And while there are 23 releases available on Bandcamp, Breakmaster Cylinder is perhaps best known for their work creating theme songs for more than 30 different podcasts including RehabCast, Outside/In, and Reply All (whose co-host Alex Goldman introduced me to Breakmaster’s music).

We exchanged emails with Breakmaster Cylinder in an attempt to get a peek behind the mask.

In a time when a highly-cultivated social media presence is something that’s valued, your choice to remain anonymous is refreshing. What was the impetus for that decision?

The anonymity thing started off just being practical. Now, it seems like people enjoy the intrigue. I like it, too—one day, I’ll totally figure out who I am under here.

In other interviews, you’ve talked about how you’ve utilized Bach fugues as jumping-off points for your beats. You use a manipulated Bach portrait as one of your promo photos. Bach is basically all over the place. Why Bach?

I played music growing up, I had to play Bach, I didn’t care much. In retrospect, I realize he’s an unbelievable genius. It’s mathematical correctness and mind-expanding beauty in equal measure. I cannot match it. I’m OK with this.

Each moment of Pickled Beets Part III feels deeply crafted, almost like you’re carving sound. Do you have perspective on your technique after so many years of working on your music?

There’s this thing called the Stones Throw Beat Battle (STBB), which is an online beat-writing competition, open to anyone worldwide and hosted on record label Stones Throw’s message board (though not officially affiliated with them). It’s a weekly battle where the group votes for the best track created according to a particular set of rules and samples. The message board crowns a winner, who then picks the next week’s sample and rules, and so on.

Doing this weekly for almost a year, I found how succinctly you have to craft a theme in order to get people’s attention. Also realized the value of a simple, perfect loop—taking a long time to work out the perfect four bars always gets you further than trying to polish something fundamentally mediocre. Listeners will just skip over it if it doesn’t grab you immediately.

The STBB also gives you a forum to polish weird rules and techniques, like writing monophonic beats (only one sound at a time), writing in odd time signatures, or embedding tempo changes midway through a track, creating your own drum kits with things around the house, etc.

Have you ever tried to break down your music and analyze it?

I always wanted my own distinct genre—because that’s what techno needs more of, clearly—so I’m inventing ‘Sink Music.’ Basically, you drag an a cappella vocal into your project, and then throw as many samples as you can at it—just entire folders—and don’t immediately worry about snapping to grid. Listen to them layered together, and carve out just the good moments. See if you can represent every word [of the vocal] with a sound and still keep it flowing like music. Document your efforts. Put them in a self-addressed stamped envelope and hand them to a bird. I’ll be watching.

Veering away from weird rules though, there’s totally a standard Breakmaster Cylinder track algorithm. First, there’s a sample that makes me laugh—either because it’s so stupid in context, or it’s been chopped and rearranged in a way that delights me. Then, there’s Dilla-esque drum machine kick and clap. If we’re hyped, mix in an entire folder full of drum breaks, just dragged around until they sound good. Next, 8-bit synth, midrange, and sub bass. Add piano, harp, or old-school science-class synthesizer, play it high, and add small amounts of reverb. Morph into different patterns quickly, and call the whole thing off about 90 seconds in. Hopefully, the result is something you could listen to on loop for three days.

Your identity is guarded, but you are very accessible to your fans. You answer almost every compliment you receive on a mix or song.

How fucking cool is it that anyone would care to tell me they like some music I wrote? It’s stupendous. Y’all keep me company in an otherwise lonely space. I remember writing to musicians growing up and almost never getting an answer. I don’t want anyone to feel that way.

Do you mind taking a few tracks apart for me? Let’s start with ‘Stereophonics ‘58!’ from the DOLOMITE! EP.

‘Stereophonics ’58!’ was me trying out Logic for the first time. The jazz drums and laughter sounds are the same sample—it’s Monty Python’s ‘Confuse A Cat’ sketch, which is delightful. For no reason I can think of, I sampled Method Man discussing the pain he came to bring, which I suspect I just liked because it’s at odds with the glee in the drum track. There’s this guy talking at the beginning—somewhere I found one of those records where it’s just a commanding man’s voice marveling at the high-fidelity of the record he’s on.

What about ‘Uninvited’ from the Pineapple Princess EP?

‘Uninvited’ happened because Alanis Morissette plays in the produce aisle of every grocery store in the universe at least once a day, and it just never leaves your brain. I found myself singing it, but I don’t know the words. Then I realized it doesn’t matter—the words are awesome, obviously, because she’s brilliant, but more importantly, that melody demands to be sung again and again. When you do, people just walk in off the street to join you. Emphatically. So I thought there was some potential to chop her up into insane glitching and make it an anthem. It’s a song you know, but sung in a new way you could still follow. I just wanted it to be a screaming wall of chords and syllables and reverb and then disappear.

I know you’ve been interested on odd meters for a while, which intrigues the drummer in me. Can you talk more about this?

I just write a lot of music, and after a while, you know where it’s headed. Melody and harmony combinations can definitely still surprise me, even the ones in pop music. But when you switch over to 5s and 7s, it’s not as predictable. If you pull it off correctly, it’s exciting to already be a step ahead of where you thought you were. ‘Butthole Rainbow’ off the new(ish) EP was jotted down on sheet music before trying to make it work on the computer. It was an attempt to accurately represent how music in my head, which I notice sort of stutters and jumps and takes as long as it needs to finish, is not necessarily set to a rigid time signature. The notes wrap around my breathing, I think.

What piece of music are you most proud of?

I’m that cylinder who thinks their new album, I Wanna Hear The Music, is their best work. Damn. If nothing else, it’s pushing closer to sounding the way I imagine music, and not just how it’s easiest to write music. Honestly, I’m currently proud of things I haven’t released yet. I Wanna Hear the Music has a really ridiculous follow-up EP in progress, which is set in the same universe. Also, I’m starting to score music for random videos I find on the Internet just to see how well I can match visuals with sounds. I’ve been working on a couple of other long-term projects I’m excited to talk about, but can’t yet. It’ll be grand.