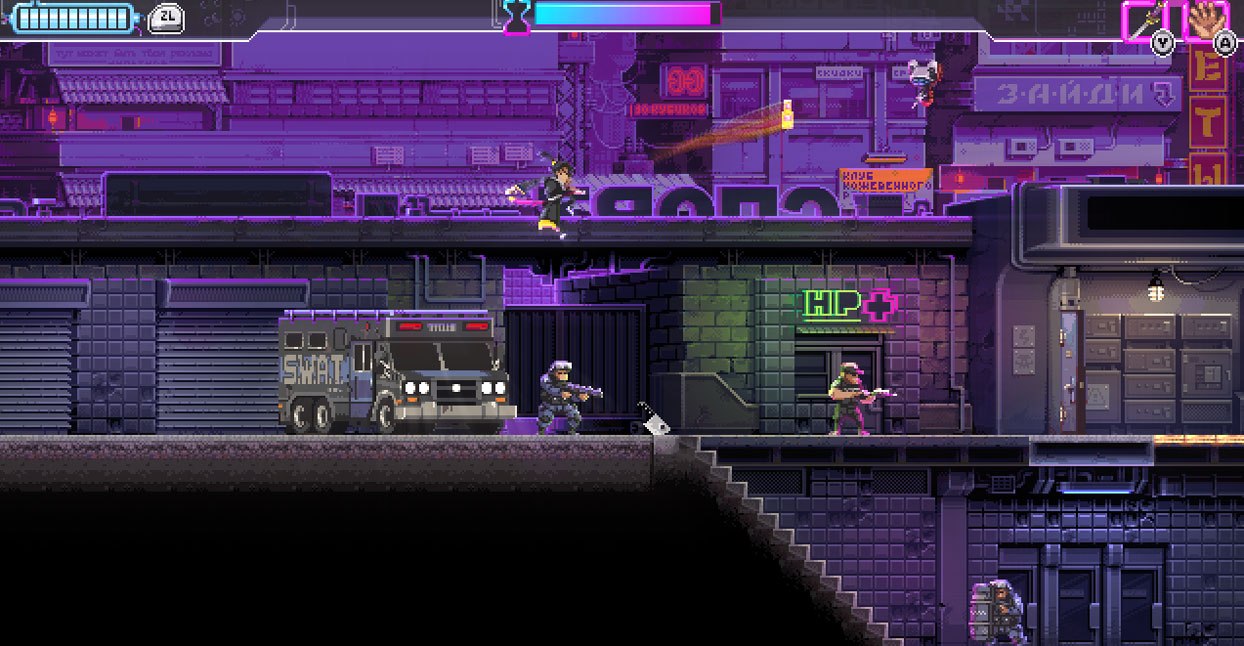 In recent years, nostalgia for the 1980s has taken a firm grasp over the American pop cultural imagination. But where most of these looks backward are fond—even celebratory—the video game Katana ZERO bucks that trend; it not only embraces ‘80s aesthetics, it recognizes what was really happening at the time. A mix of neo-noir and historic lessons unlearned, Katana ZERO (released last month on the Nintendo Switch and PC) puts players in the blood-soaked shoes of Zero: a bathrobe-clad, katana-wielding assassin searching for answers about his mysterious past. It’s not an easy feat, given all the woes with which he’s forced to reckon: incessant amnesia, internal recurring nightmares of past war crimes, and a potentially-lethal addiction to a time-looping drug that contorts his perception of time so as to render death nonexistent.

Katana ZERO boasts high-octane action that calls back challenging ‘80s NES games, with a refreshing twist in terms of mechanics and narrative. But what makes it truly stand out is its exemplary soundtrack, released by Bill Kiley and LudoWic on Wic Recordings. While a cursory listen to the game’s music may suggest vapor, a deeper listen proves the duo drew from a much deeper well of ’80s electronic music: You can hear bits of Chicago house, early electro, and synthpop.

When game developer Justin Stander of Askiisoft began work on Katana ZERO, he contacted Kiley, who had previously worked with him on games such as Pause Ahead and OverPowered, to do the score. He also brought in LudoWic after hearing some of his tracks on YouTube.

Initially, the process for creating tracks was straightforward. “The dividing was mainly done by Justin,” LudoWic says. “He knew the best who he needed for which level.” But as time went on, the music began looping in on itself. “As the game took shape,” Kiley says, “I feel like LudoWic and I both became more in sync with the tone of the game, and we were able to produce music.”

That tone became seamless, whether during the hack-and-slash sequences, or when the character was at home drinking herbal tea.

“The idea was originally to have LudoWic write the high-energy music for the levels, leaving me to cover the quieter, story-driven scenes,” Kiley says. “As the project progressed we gleefully broke this rule and ended up writing music for levels and story scenes all over the place.”

The ‘80s influences were clear from the beginning. For Kiley, he was listening to the likes of Gary Numan, Yellow Music Orchestra, Vangelis, and others. LudoWic’s instrumentation harkened back to that earlier time, relying primarily on old analog synths and drum machines.

At the heart of Katana ZERO’s narrative is the way war scars the national psyche—a recognition of the atrocities committed during war, and the creeping horror that follows, all of which were prevalent in ‘80s. The protagonist, veteran of a war with a passing resemblance to Vietnam, “is damaged and detached from reality,” LudoWic says. His assassination missions—given by his psychiatrist—drive him, but they also suggest something much darker at work as the bodies pile up.

The composers took different methods to answer this character’s place in the game. “My approach was to mirror what the protagonist might feel during missions,” Kiley says, mixing colder sounds during missions with warm and familiar tones during scenes at home. As for LudoWic, “I recorded most tracks as a jam/improvisation,” giving it a more organic feel. “Sometimes it’s aggressive,” he says, “but more often it’s a restrained aggression, which I often experience as more intense.”

Drugs play a large part in Katana ZERO’s narrative—another issue that loomed large in ‘80s city life. Not only do many assassination targets have connections to the illicit drug trade, but the main character himself uses a wartime combat drug that allows a person to “rewind” time.

Kiley recognized this in the script, and composed accordingly. “It was clear to me…part of [this game’s] sound should be rooted in ‘80s drug scenes,” he says. The soundtrack scores scenes of characters snorting coke in a limo, as well as haunting withdrawal hallucinations. It also tied into the game’s narrative, which provides multiple potential story trajectories based on dialogue choices. “We wanted to create a variety of soundscapes that could capture the shifting moods and reflect the protagonist’s evolution throughout the course of the narrative,” he says.

The final product, a project that spanned five years, is already explosively popular, and sold 100,000 at the Nintendo Game Store in its first week alone. The music has played a huge role to its success, and the composers are grateful. “Throughout the process LudoWic and I were on the same page,” Kiley says, “and it was a pleasure to work with an artist of his caliber.”