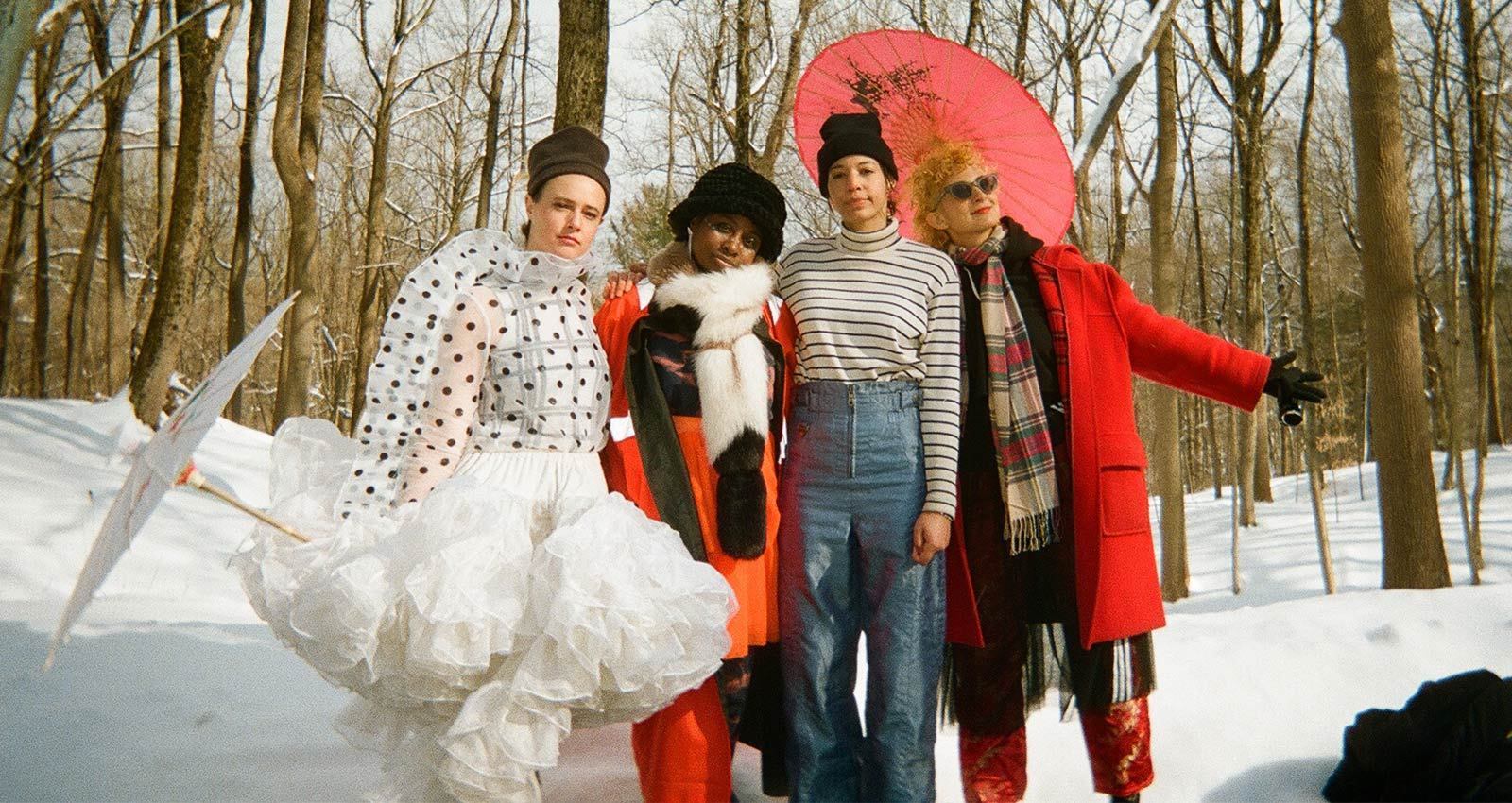 Four years ago, Kalbells was just Kalmia Traver; it was her solo project away from her usual gig playing in the art-pop outfit Rubblebucket. During that time, Traver was dealing with a difficult recovery from cancer, and without planning it, Kalbells became an emotional release. After playing a few shows accompanied by drummer Ian Chang, Traver enlisted Angelica Bess (Body Language), Zoë Brecher (Hushpuppy, Sad13) and Sarah Pedinotti (Okkervil River, Lip Talk) to help expand Kalbells. “I remember I was in a hot yoga class and I just saw it. That’s kind of a boring story,” she says, “but I just really wanted to do—for lack of a better word—a girl band. I had never really had a lot of opportunities to perform with other femmes, and it was an intentional thing.”

Their recent venture as a full band is Max Heart, an album born from a bad breakup—“the worst one I’ve ever had,” Traver says. Melodically, it wields twee like a weapon, giving it a serrated edge and using it to forge a regenerative path through the difficulty of that experience. The album wends its way through lushly painted, fantastical worlds as an exercise in both escapism and worldbuilding for self-care. Max Heart moves through the joyous sunshine of “Hump the Beach,” the utopian naïvety of “Bubbles,” and the regenerative landscape of “Flute Windows Open in the Rain” with a mixture of close vocal harmonies, brightly sparkling synths, and excitable drum lines. To combat her lack of self-confidence after the breakup, Traver says, “I established a creative practice with myself that I could come back to, and I started to see all this magic pouring out. Music just catches us, it’s wild.”

Before they started collaborating, the four members of Kalbells connected via the New York DIY scene. The decision to include three other people in the writing and performing process has been an intentional one for Traver. In order to be mindful of each other’s ideas and psyches, Kalbells have developed “the radical love experiment,” which is Traver’s name for “a relationship technology, a way to say what you need in a way that won’t land hurtfully for the other person.” This allows the group to focus on music-making as “a playbox that’s safe” rather than an ego-stroking exercise. “It’s spiritual,” Traver says. “It goes all the way down to meditating, and what meditation teaches us about responding instead of reacting. That’s what gives Kalbells longevity—it doesn’t have to be a band that wins all the contests and becomes the most dominant force in the world. It’s just a space that is positive for us and that’s enough.”

The experience of bonding as a band has been strengthened by Traver’s processing of her recovery from cancer—an experience that deeply influenced her first album as Kalbells, Ten Flowers. She compares her experience of working with Kalbells with writer adrienne maree brown’s work on the theory of emergent strategy. “The idea is that no plan survives in contact with reality,” Traver says. “So you could make this big statement: ‘Ok, this is what this band is going to be.’ But we want the band to survive life, so it’s going to emerge in a different way, because our love is so powerful. That’s what we want to show the world, and we’re going to do that no matter what. The details are going to be the things that change. That’s the philosophy that’s coming from cancer, it’s this deeper connection. The love is the story, then I’m just in service of that and letting it thrive and be alive,” she says.

When asked how her ambitions for Kalbells have changed, Traver pauses and says jokingly, “I know I said that we weren’t trying to dominate the world, but I think we really want to dominate the world.” With a note of self-deprecation, she adds, “We want to be stars, we want to get rich and famous, and we want to convert everyone to Kalbells. I don’t know what Kalbells fans are called yet, but we gotta figure that out.”