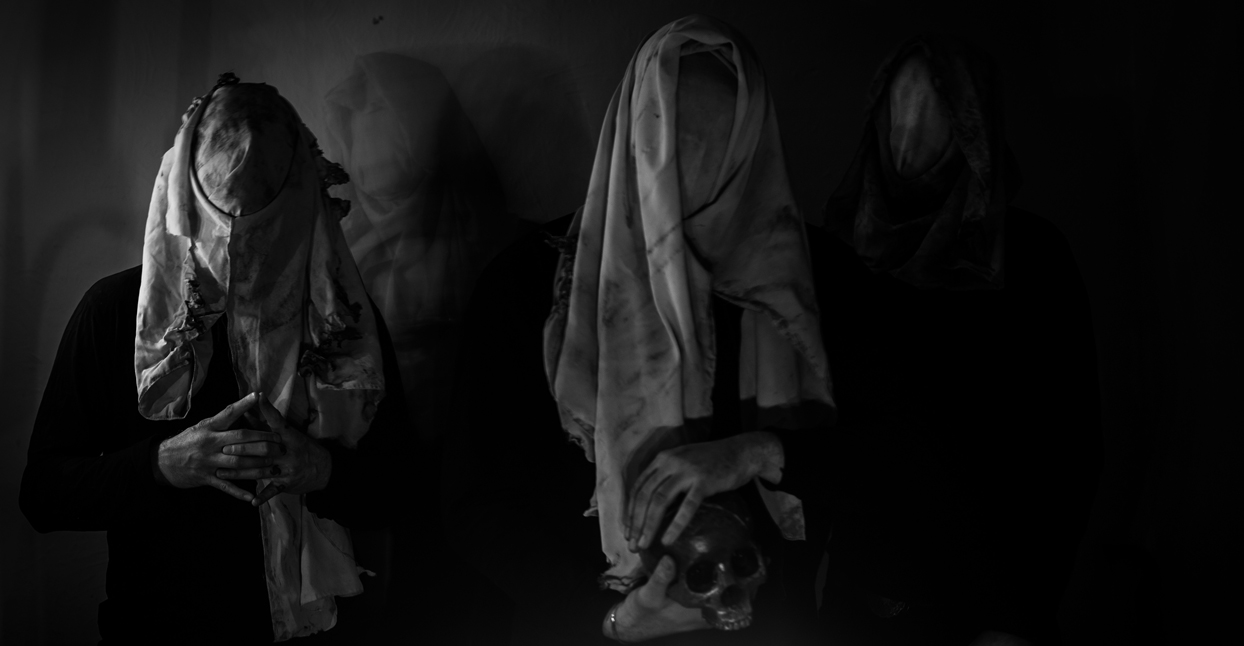 The dank caverns of black metal are populated with plenty of bands obsessed with both the darkness of life and the evil side of religion. But only a few of those bands back up their music with consistency and realism. Kafirun are one of those bands. On their full-length debut, the British Columbia-based duo explore apocalyptic themes and contemplate what lies beyond the black pale of death. Their dizzying brand of black metal is meant to draw the listener into hypnotic submission, so their mind can be opened and their will corrupted. Their name, which means “disbelievers” or “infidels” in Arabic, is taken from Islamic religious texts, which is only a hint of their deep and unyielding system of beliefs.

In advance of their latest release, Eschaton, we sat down to chat with Luzifaust and Hanephi about mysticism, death, and nothingness.

If death, resulting from the apocalypse, represents the opening of a portal, what lies on the other side?

Luzifaust: I don’t write fiction. Eventually, all life will end, a dramatic transformation of reality from what we think we know. Death is the release from limitations of the flesh and matter, a microcosmos capable of defining its own boundaries. But to do so, we must transcend past man-made ideals.

You say you’re influenced by the occult and ancient mystical thinking. Can you explain more about that?

Hanephi: Knowledge is a key to independent thought, and also to insanity. Many minds that possess knowledge also fall as slaves to the same knowledge that once freed them. I think doubt and skepticism must always be a part our thoughts. With ‘occult and mystical thinking,’ I am referring to knowledge of forgotten ancient cultures and their belief systems—various occult disciplines, and so forth. I think the knowledge and philosophical perspective I have gained from these sources over the years have allowed me to build a diverse foundation, which ultimately gives me a library of knowledge. But regardless of all that, all answers and truths essentially exist within one’s own self. One must seek them within.

What place does the Luciferian path play in your theology?

Hanephi: I consider Lucifer as the one who bears the light of knowledge and enlightenment. In our concept, the Luciferian path represents individualism and rebellion against the enslaving monotheistic dogmas and thoughts.

When you make music—in this case, dizzying black metal—what are you hoping to conjure?

Luzifaust: ‘Dizzying’ is probably the last word I would use to describe it. It is more hypnotic, maybe. For me, it is more meditative form of aggression, and is the means in which to delve deep into inner darkness.

Hanephi: To me, this type of music as an art form is a tool to express darkness in a sonic form. Sound has the power to penetrate flesh and mind. There is a moment during a performance, that reveals a formless energy, when the entire band reaches that perfect, captivating moment combined with intensity. I think that’s my main purpose of making this type of music: to experience that transition of darkness, from a slumber into a chaotic onslaught of aural punishment.

Hanephi: I am not a fan of any kind of dogmatic thought or belief. Our ideas and philosophy are evolving as time goes on, and I don’t think they will never be set in stone. Personal beliefs and ideas, when they cease to evolve, are destined to become dogmatic. The most daring and rebellious ideas end up becoming old and rigid. I think we can say that we serve death, as it is not a dogma nor an idea. It is the only promise that is not broken.

Luzifaust: Death is the only thing close to a deity that I can honestly say exists without question.

Your name means ‘disbelievers’ or ‘infidels.’ Who are the disbelievers and infidels? How do you fit into that equation, are you a believer?

Hanephi: First of all, we are not representing any group of people. Simply put, we represent only ourselves. In that regard, the infidels and disbelievers are the men who follow their own path and carve their own true self, purified, and reborn—those who do not submit their will to the will of god or gods, who don’t follow false promises and lies of man-made religions.

I do not think myself as a believer. I am a nihilistic wanderer in a world where I think the existence is one everlasting moment, life and death are entwined, inseparably. To me, existence is a path without an end nor beginning.

What is the meaning of death? What point does it service with regard to humanity’s evolution?

Luzifaust: Death is what unifies microcosmos with macrocosmos. Humanity is a plague—a cancer, like the cells causing a tumor. Death is abundant. Every second you are alive, there is something dying inside you, and all around you. It is through decay that time exists.

What do you think lies beyond the flesh?