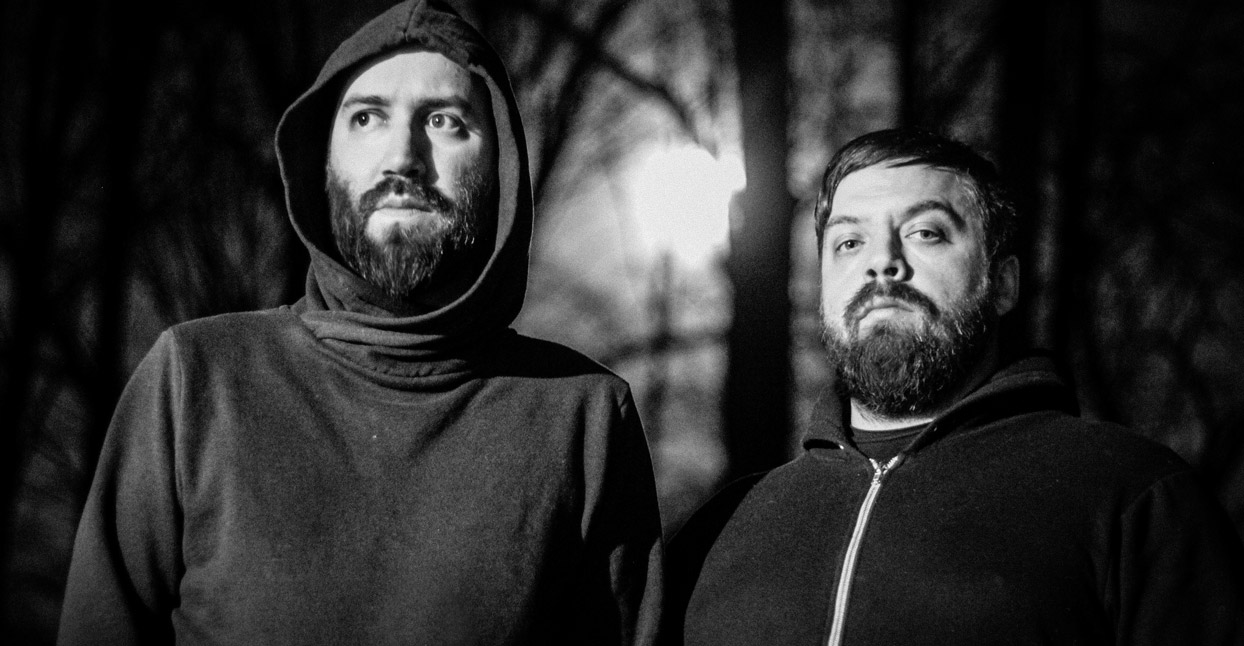 It’s been over five years since Junius, the new-wave-adjacent metal band once heralded by Rolling Stone as “a perfect hybrid of Neurosis and the Smiths,” released Reports from the Threshold of Death, a record that soundtracked a soul’s journey into the afterlife by drawing equally on doom and shoegaze. In that time, the band has been disassembled and rebuilt, with only founding members Joseph E. Martinez and Dana Filloon remaining. For the their new album, Eternal Rituals for the Accretion of Light, Martinez wrote all of the songs on his own before working them out in the studio with Filloon on drums; this album also features guests like Drew Speziale of Circle Takes the Square, who provides alternately soft and screamy backing vocals on several tracks.

Eternal Rituals is based around Initiation, the semi-autobiography of Hungarian mystic, yoga practitioner and reincarnation expert Elisabeth Haich. Martinez used the book as a rough blueprint to tell the story of a soul’s “path to transcendence,” beginning with an initiation and ending with the total obliteration of self—a lift-off into ego-death. The album is the band’s heaviest to date, full of chugging guitars and whooshing synths that climaxes with “Black Sarcophagus,” their prog-doom thesis statement. “It’s just another hero’s journey through self-awareness, determination, struggle, humility, pain, suffering, passion, love, telepathy, and ultimately transcendence to GOD-MAN status,” says Martinez. “You know, the same old shit.”

You’ve talked before about Eternal Rituals being the conclusion of a trilogy that started with 2009’s The Martyrdom of a Catastrophist. If Reports picked up where Martyrdom left off, with Immanuel Velikovsky’s death, where does Eternal Rituals fit in?

It ties everything back together into one eternal loop. Martyrdom explored a life, Reports explored a death and Eternal Rituals explores a life with the awareness of the death/life cycle, and possibly provides a solution.

How did you first come across Initiation? What about Haich’s ideas stuck with you, and why did you decide to focus the album around them? Why this topic, and why now?

I was having this block about what the next concept was going to be. I kept coming back to reincarnation, because that seemed to be the most obvious choice after Reports, which ends with the soul’s journey exploring the ether and possibly coming back to this world. But the problem I was having with using the concept of reincarnation is that it would only lead to another concept about someone’s life, and I already did that with Martyrdom.

Initiation was sitting on the shelf staring at me with its bright red binding. I never even considered it, because I never viewed that book as just a reincarnation story—and, of course, that is exactly what I was looking for. That book has this weird sense of familiarity to it. I felt strangely connected to it. It felt like I was Bastion reading The Neverending Story , but in Egypt. It’s the perfect subject to end this trilogy with.

This is your heaviest record by a significant margin. Did something in the material call for that?

I was cognizant of the fact that this was the final album for this trilogy, and I wanted to make sure it fit with the two worlds that were created before. So I tried to bring back some of Martyrdom‘s dynamics and structure with Reports’ boldness, and still get heavy like [2014 EP] Days of the Fallen Sun. I really wanted the ‘destruction of self’ section of this album (“Clean the Beast” and “A Mass for Metaphysicians”) to be the most brutal and painful and beautiful sounding thing we’d ever released. That’s the ‘heavy’ you’re referring to, I believe. Other than that, I think this album has some of the most delicate tracks we’ve ever recorded, and we go places Junius fans have never heard us go before.

You’re also using synths more than ever—particularly in roles you may have assigned to guitars or bass in the past, like the pattering rhythm in the bridge of “A Mass for Metaphysicians.” You also use harpsichords and what sound like string sounds. Are sounds like this in your mind when you’re writing the record, or are do they arise organically while recording?

You are perceptive, my friend. I was definitely trying to chill out with the excessive guitar layers and let the synths breathe a little more. Most of our albums have a ton of synths, but they get drowned out by a million guitar layers when it’s time to mix. Since this album was the end of a trilogy, I used all the synths from all the other albums, plus a few new ones, and mixed them together to create some new sounds.

When I’m choosing synth sounds, I generally divide them into two categories: Texture, and the voice of GOD . Most of the powerful moments on the album will have a voice of GOD choral synth mix, like a mellotron patch mixed with a Blade Runner -type synth. For me, there is nothing more powerful than the human voice, it’s primal and undeniable, so I tend to always use choral synths to highlight moments that I want you to connect with.  The texture synths are generally background ambient stuff that aren’t emphasizing a main melody.

These recurring ideas of apocalypse, rebirth, the transcendence of death—why do they continue to interest you?

I definitely have a love for the unknown, and I find life has a little more worth when there’s mystery surrounding it. It’s probably a trait that leads men to spirituality—we’re never truly satisfied once we think we have an answer, and ultimately we love the journey to knowledge more than the knowledge itself. So, basically, I love The X-Files.

The fact that you approach these topics with a sincere interest is a big part of your appeal—at least, for me. Do you think people are attracted to your music because they can have that deep experience with it?

Yeah, I try to approach things as innocently as possible and dive into each subject with an open mind. You have to give in to the possibility that there is something beyond, that these stories could have some basis in reality. It’s the only way I can truly let go and create this world in my head. As far as why people are attracted to us, I can only speculate. But I’m hoping they are at least feeling the intensity and emotion that I feel when I’m writing this music, and if they connect with the subject matter too, then that’s fantastic. Even deeper than that though, for me: writing is like having a transcendental experience, and if someone can get a glimpse of that through this music, than I feel I’ve served my purpose. It’s like being able to share your daily meditation with someone else.