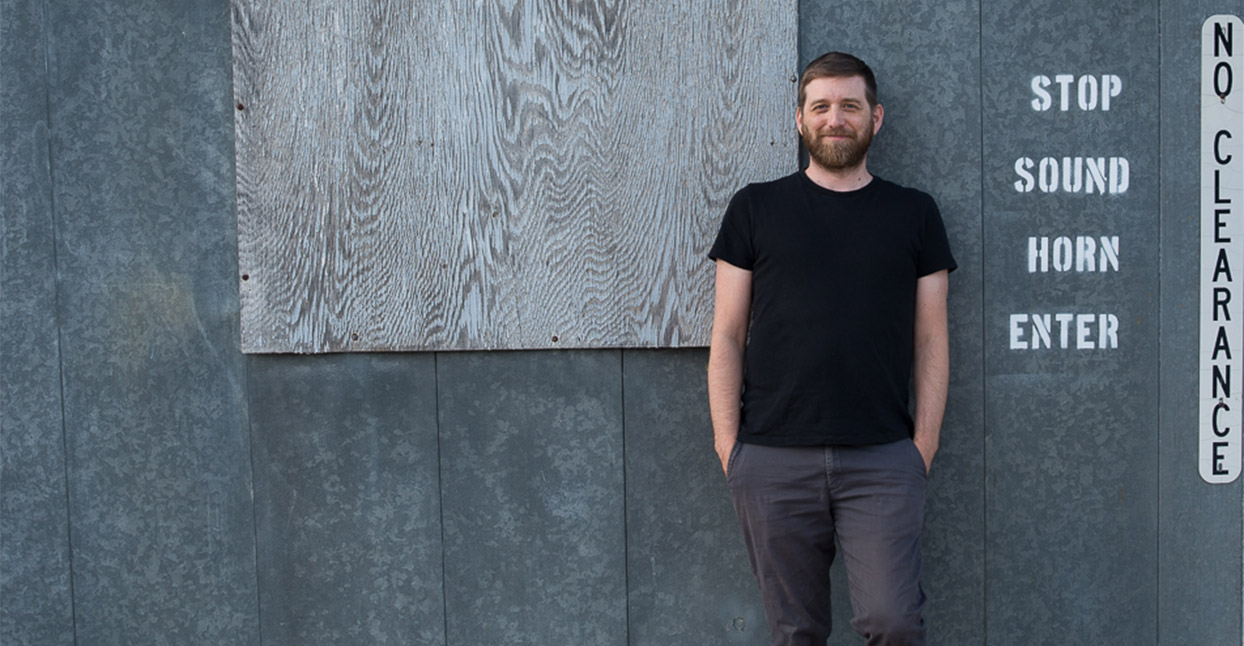 If John K. Samson gets overlooked as one of his generation’s finest songwriters, it might be thanks to the unconventional road he took to get there. The Winnipeg-born musician joined Canadian punk outfit Propagandhi as a bassist while he was still a teenager. He began honing his own voice as a songwriter in his twenties with his own band, The Weakerthans, which would release four albums from 1997 to 2007. Over the course of that decade, Samson—who wrote smart, catchy songs—shed his tendency for verbose or overtly political material in favor of deeply moving vignettes, often portraying characters living on the fringes of society. In 2012, with The Weakerthans on indefinite hiatus, he released Provincial—a sprawling portrait of his native Manitoba that included both urgent, impressionistic rock songs and ambitious works of historical fiction—under his own name. His follow-up, Winter Wheat, is comparably stripped-down and focused, but it finds Samson experimenting with various songwriting approaches that feel totally fresh, including a handful of songs that are responses to tracks from Neil Young’s On The Beach. It’s a more personal album than Samson devotees are accustomed to, but like all of his songwriting endeavors, Winter Wheat slowly reveals interconnected themes and characters with each new listen. It also expands on at least one storyline—involving a cat named Virtute—that Samson has been working on for nearly two decades. He spoke to Bandcamp via phone from his home in Winnipeg.

We talked the last time you went out on a large-scale tour, in 2012, and you said that you could see yourself walking away from playing music altogether. Do you still consider that?

I don’t think about walking away from writing. I feel like this album is a bit of a side-step for me—a comfortable side-step. It’s a much smaller-sounding record, and it was a much more intimate and direct record to create. I feel like that was important for me: to be able to kind of step away from a larger machine that was pushing the industry side of my life. Performing makes me very anxious, but it’s also, I recognize, one of the greatest things I have ever experienced. It’s a kind of communion for me—performing can be really profound and wonderful. So I don’t think I would ever walk away entirely from that, either.

Did you have that same sort of anxiety around playing live when you were playing in Propagandhi or The Weakerthans?

Oh yeah, absolutely. I’ve had it since I was a kid. I’ve been performing since I was a kid—I was in choirs when I was a kid and in bands starting around 16 or so—and it’s always been a struggle for me. I don’t think my feelings have changed towards it, but I’ve come to understand my limitations. Playing to a smaller room of people is just better for me as a human being. In a small space, suddenly there’s more air in the room somehow. When I get past a certain number of people in a room, it changes from a collective experience to a kind of separated experience.

So how did this album come together differently than the others?

It came together in a surprising way to me. I had some of the songs, and I didn’t see how they fit together, and then this idea of responding to Neil Young songs came around—there are four or five songs on this record that are responding directly to Young’s record, On The Beach, which is a wonderful and curious record—and that provided a spine to the album, in a way. I had these signposts that I could build a record around, and it gave me room to wander a bit more than I had on the previous project, Provincial, which was very research-based. Weirdly, I feel like that allowed me to write really personally again—to swing back to a direct and personal lived experience, as opposed to a sort of detached and distant kind of writing.

And that happened by way of Neil Young? What was your fan relationship with Neil Young before you started writing these songs?

I bought my first electric guitar the day after I saw the movie Dead Man, the Jim Jarmusch film that Neil Young did the score for. He did a live, almost entirely guitar-based score for it, and it’s incredible. I was so overwhelmed and moved by it—that was in 1995 or something—and before that I had never really thought of playing electric guitar. So the next day I went to the local music store here, and I said, ‘I want to sound like Neil Young.’

Did they laugh at you?

Well, they did. It was classic Winnipeg. The guitar store guy said, ‘Why would you want to sound like that?’ I was kind of bewildered, but not surprised, because it’s this classic small-town, tallest-poppy thing, where you cut down the favorite son. But that led me to starting the Weakerthans a few years later. I started writing on this guitar that sounded nothing like Neil Young. It was a, like, three-hundred-dollar Ibanez Talman guitar. But Neil Young has been certainly a great influence on me. A profound influence. I don’t really write like him, but I have always been inspired by him. I love his imagistic, kind of reflexive lyrics. They seem really direct and abstract at the same time, and they’re generous. They give a lot to the listener, and I think that’s why he’s so admired and why his fans are so serious about his music: because there’s some real work to be done by the listener. That’s a nice gift that he gives them.

Sometimes the album’s Neil Young nods are subtle, and sometimes—like the melody line and some of the lyrics in “Vampire Alberta Blues”—they’re really direct responses.

Yeah, and there are others. “Select All Delete” is responding to “Walk On,” which is one of his great songs. I think a lot of his work still seems really prescient. His concerns are really easy to transpose, because songs he wrote 45 years ago seem really relevant now.

I am really interested in “Quiz Night at Looky Lou’s.” It’s a largely spoken-word song, and there’s more than a touch of paranoia to it. The protagonist believes he can communicate with his mind, and that secret messages are being communicated to him at the quiz night at his local bar.

This whole record, in a way, is about coming to terms with and living with our delusions—and about being able to accept who we are and where we come from. The Internet is an example of a delusion, in a way. It makes us feel less alone but it doesn’t technically make us less alone. To be less alone you have to be with someone. I’m not saying delusions are always bad things. Trying to accept them and function within them might be more feasible than medicalizing them or resisting them—or punishing people for having them.

So I was writing about delusions metaphorically, in a lot of cases, but then I wanted to write something that was directly about actual delusions: someone having a mental health crisis. In “Quiz Night at Looky Lou’s,” I feel like there’s some danger with the character. Then I felt bad about leaving them in the middle of nowhere, so I wrote the next song, “Alpha Adept,” as a redemption of that character. It gives them a happier ending, where they find a secluded place where they can actually function with all their issues.

There’s a lot of escaping, too: running away, finding a clean slate somehow. And that’s a theme in a lot of Neil Young songs, as well.

I think you’re right, there’s a longing for something simpler, you know?

Most of your catalog is in some ways the opposite. You write about a lot of people who are stuck in small places and can’t get out. You’ve written really elaborately about a couple of regions and cities. So is it kind of a relief to you to be writing songs about escaping?

Yeah, absolutely, I did feel like I wanted to wander a little bit and step outside of my regular touchstones. I wanted to push myself a little bit. There’s a song set in London, England on this album. I was really excited about it, and did a lot of research. It felt really liberating to immerse myself in this idea of London in 1979.

That research instinct is hard to shake.

Yeah! For me it’s just fun. There are still a couple of those songs on this album where I turn to books, and I really love that. It’s one of the great things about songwriting, that it’s really limitless. The form will hold so much.

And yet so many people don’t explore that side of songwriting.

Yeah, I wonder about that. It’s interesting, my wife Christine and I have been teaching some creative writing courses, and we teach some community workshops where we do songwriting with people who have never written songs before. It’s pretty remarkable what they want to write about. They don’t want to write about what they hear on the radio, they want to write about their lives, and the unusually specific things about their lives. I find that super inspiring: If you can get past the idea of an audience—because these are writers who are writing for their friends and families and not for a broad audience—there’s something really powerful there.

So how do you navigate that line of writing for yourself or your audience? For example, you have written a series of songs about the same cat, Virtute. You return to Virtute again on this album. Clearly that cat is a fan favorite—are you writing for your listeners?

I try not to. “Virtute at Rest” came to me kind of as a gift. It was a weird one. It came to me when I really needed it. I’m not really sure how to describe it.

There’s a theme that runs through all of my work, this idea of the disappeared. Where the dead go, what we do with the departed, and the fact that they do live on within us. I couldn’t really envision a way of that cat returning until I encountered a time in my life when I really needed the comfort of the company of that voice in my brain, telling me that it’s going to be difficult, but… [long silence] but you need to continue. That song arrived when I needed it. I wasn’t sure if I wanted to share it, frankly. Part of me now is worried that maybe people won’t like it.

The cat songs sort of started with a song on [The Weakerthans’ 1997 album] Fallow called “Confessions of a Futon Revolutionist.” I never really made that clear, but there’s this line, “enlist the cat in the impending class war.” When I later wrote the first song from the point of view of the cat, it was about that guy. So it started really loud and fast, and then it was still loud [on the song “Plea From a Cat Named Virtute,” on The Weakerthans’ 2003 album, Reconstruction Site], and then on “Virtute the Cat Explains Her Departure” [from The Weakerthans’ 2007 album, Reunion Tour] it got quieter. And then it winnows down to this one solitary kind of voice and guitar. There’s this winnowing down to almost nothing that the human character also goes through too, right? This isolation. I think of it as a long story that I’ve been telling over almost twenty years—and that I was sort of surprised by.