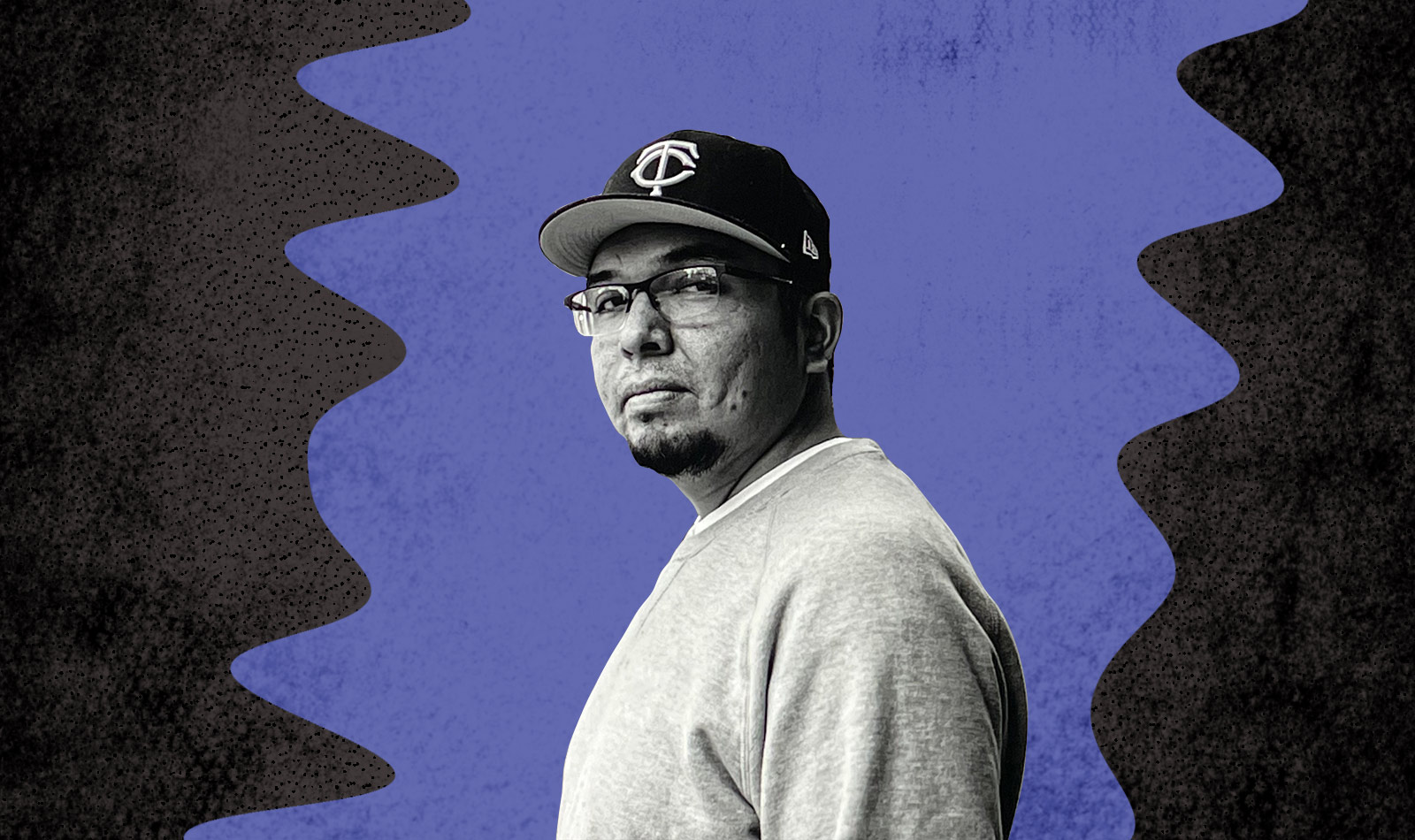 Powwow singer Joe Rainey was watching Minneapolis producer Andrew Broder cue up a beat at Wisconsin music and arts festival Eaux Claires when something extraordinary happened. Reuben Crowfeather, a Hunkpapa Lakota tribesman and member of Minnesota drum group Iron Boy who was in the audience, began dancing. He was wearing full regalia in the traditional dance style, including a bustle of eagle feathers. Traditionally, the sacred wood-and-rawhide drum is the beating heart of powwow. But that day, it was Broder’s synthesized rhythms that scored Crowfeather’s performance. “It was unrehearsed, unannounced, total spur of the moment,” recalls Rainey, who was performing at Eaux Claires with another legendary Twin Cities drum group, the Midnite Express Singers. “That was in my mind for a long time as a ‘This can happen’-type moment.”

Nearly four years later, Joe Rainey is having a moment of his own. On May 20, he released his debut LP, Niineta, via Justin Vernon and Aaron and Bryce Dessner’s label and collective 37d03d (pronounced “people”). The album blends Rainey’s powerful voice—and samples culled from the hundreds of powwow audio recordings he’s gathered over the years—with Broder’s rattling bass and heart-tugging string arrangements performed by other members of 37d03d. But Niineta is more than just a stirring listen: Its 10 tracks are coded with Easter eggs for both Native and non-Native audiences. The song title “b.e. son” stands for “Black Elk’s son,” and pokes fun at Rainey mishearing Soundgarden’s “Black Hole Sun”; “jr. flip” shouts out both Rainey’s son, Joe Jr., and beloved Timberwolves coach Flip Saunders; and “no chants” gently educates those who unknowingly mischaracterize Rainey’s singing. “This is a collaborative project that two not-of-the-same-race people made together,” Rainey says. “It’s not a kumbaya thing. We want to show you this infinity stone that should have been on the dang gauntlet.”

A member of the Red Lake Band of Ojibwe, Rainey grew up in Minneapolis’s Seward neighborhood, an enclave of tree-lined streets just west of the Mississippi River. Popular for its restaurants and hip yet family-friendly offerings, Seward is also blocks away from the American Indian Cultural Corridor on Franklin Avenue, a cornerstone of Minneapolis’s indigenous community. Rainey’s home was “literally on the other side of the tracks,” he says, from the majority-indigenous subsidized housing complex Little Earth. When Rainey was five years old, he attended a Mother’s Day powwow in East Phillips Park next to Little Earth, where iconic Minneapolis-St. Paul drum group The Boyz (also featuring Crowfeather, whose mother babysat Rainey) were singing. They had long encouraged Rainey to come up and sing with them, but he had always been too shy—until that afternoon. “For some reason, I knew the song,” he says. “Then I was standing behind the drum, and when the lead came up, I yelled it, and then ran away. It was an embarrassing moment for me, but after that, it was cool.”

He joined Little Earth Juniors, a youth singing group, and studied under his drum teacher and chaperone Darrell Kingbird, who is mentioned in Niineta’s liner notes. As he got older, Rainey formed drum groups with peers and family members, until singing took a backseat to basketball as his voice changed in high school. Three years after he graduated in 2005, Rainey was recruited by the Midnite Express Singers for a trial run; the drum group noticed his talent when he was a young performer, and they wanted to see if his vocal strength and technique had survived puberty. That was the first summer Rainey traveled to compete in powwows—intertribal gatherings centered on dancing and drumming groups, with vendors selling Native food, art, and crafts. (At many powwows, dancers and drum groups compete for cash prizes.) At that same time, Rainey was becoming a devout audio nerd. He collected General Electric and Sony cassette tape recorders from eBay and local garage sales, and traded his host drum coat—a coat that was given to Rainey and the Midnite Express Singers for being host, or lead, drum at a powwow—for a Tascam shortly before he met Vernon at Eaux Claires in 2016. Rainey also attended audio engineering school at Northeast Wisconsin Technical College, and it was there that Niineta began to take shape.

Using the free audio editing program Audacity in beatmaking class one day, he distorted half of a sidestep song by the Mille Lacs Ojibwe Band’s Little Otter Singers—a group featuring Kingbird who are renowned for that style of singing—to match the beat he heard in his head when he listened to the song. Dissatisfied with his remix attempt, Rainey asked Broder if he could transform it into something like the beat that had made Reuben dance. At first, Broder balked. “He was like, ‘Dude, I’m not trying to be the drummer. I’m non-Native, bro,’” Rainey says. “‘I appreciate it, but let me marinate on it.’ And then he came back with four or five [tracks] right away.” Rainey recorded vocals in the same chair from which he’s been conducting interviews for the album, with a Kyrie Irving banner pinned to the wall behind him for inspiration. When Rainey was about to do a take, he would turn off the furnace and sump pump and yell up to his three children and wife on the floor above him, “Quiet on the set!” Parts of the duo’s process are preserved in Niineta. Crackling album closer “phil’s offering” is an uncut version of the lengthy instrumentals that Broder uploaded to Dropbox, and Rainey’s raw vocals appear two minutes into “easy on the cide” because that’s how long it took him to start singing over Broder’s thumping lockstep.

“Easy on the cide”—‘cide short for “genocide”—opens with Wisconsin powwow MC Joey Ahwonopay joking about someone having toilet paper stuck to their moccasin at a local 2018 event. That particular sample within the context of the title emblematizes the interplay between light and shadow that adorns Niineta. “Turned engine,” featuring an arresting refrain from Nakota Sioux singer Allie Bearhead, plays with the phonics of a derogatory term deployed in Dances with Wolves (1990). (The song also “turned over like an engine,” Rainey says, when Bearhead’s vocals were added.) “Can key,” the haunting and spare first song that Rainey and Broder worked on together, references a scene in fan favorite Thunderheart (1992) and showcases a snippet from Iron Boy’s now-deceased McAllen Garvin, aka Big Mac. “When he was a younger man, his voice was one of a kind,” Rainey says. “Losing him and not being able to have him on my left side—it’s been tough to get over.”

The grief of losing so many that Rainey considered brothers is part of what inspired him to work on Niineta throughout the pandemic. His other motivation was to make his family proud. In one of Rainey’s final in-person conversations with his grandmother Ruth, “she told me to continue with my music,” says Rainey, who adopted her Ojibwe nickname Zha1 as a moniker for his work recording and converting audio recorded from powwows. These words of encouragement, along with a resounding “hell yeah” from those he approached for permission to sample their voices on the record, carried him through self-doubts about stepping outside the drum group to release solo material. Broder also insisted that more people needed to hear this record than the “powwow realm” that Rainey had initially envisioned as his audience.

“That’s when I had to start thinking, ‘Man, am I really going to be out here like this?’” he says. “But this is my style to be outside the box. I needed to realize that about myself.”