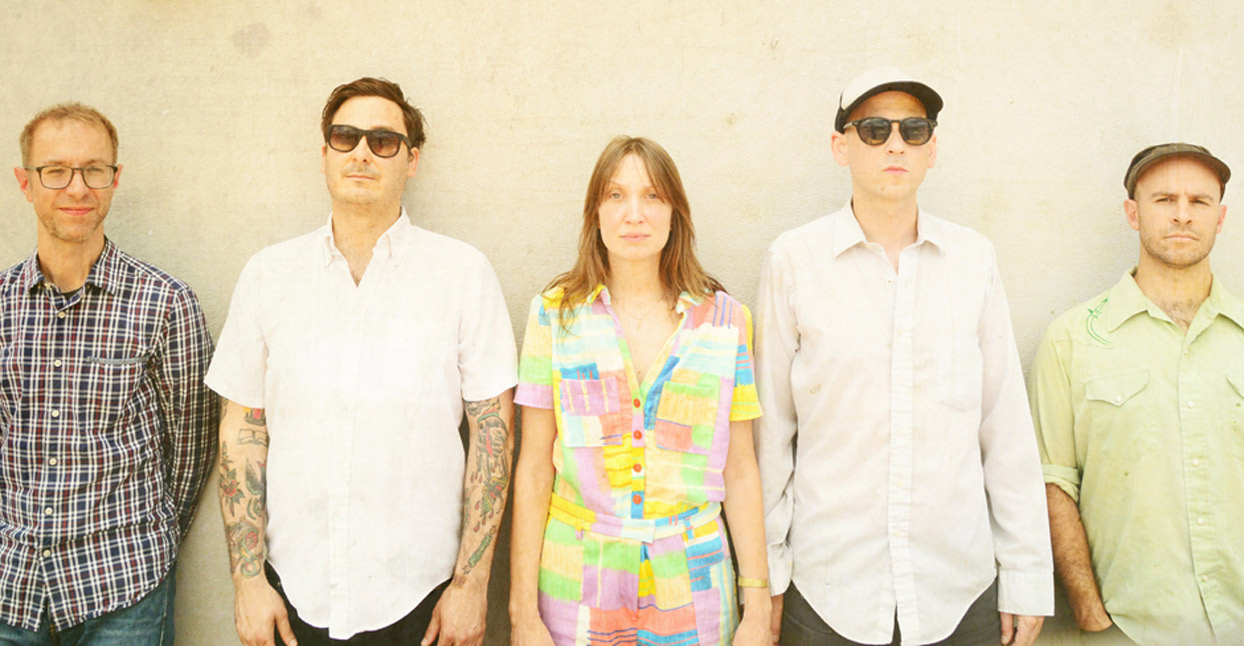 Joan of Arc by Shervin Lainez

It’s been 20 years since Joan of Arc emerged from the ashes of Chicago cult oddity Cap’n Jazz—a noisy, angsty project too experimental for alternative but too melodic for punk. Those origins, plus damning by association with some of their peers, resulted in the band being lumped in with the “Midwest emo” wave of the mid-late 1990s. Joan of Arc singer Tim Kinsella and his bandmates have proudly been waving their collective middle finger at genre trappings ever since. With head-scratching album titles, including 2003’s In Rape Fantasy and Terror Sex We Trust (the title track is an attempt by Kinsella to capture the overwhelming nature of hearing Bauhaus’ The Sky’s Gone Out at age 10, before he was ready for it), and tongue-twisting song titles, Joan of Arc has courted confusion and uneasy listening since their inception. After a four-year “hiatus,” the band’s latest, He’s Got The Whole This Land Is Your Land In His Hands, is proof that Tim Kinsella still loves fucking with our heads.

If the Butthole Surfers recorded a post-rock record, the result would be something like He’s Got The Whole. Recorded in a variety of non-traditional spaces, including a hotel basketball court, a friend’s AirBnB, and industrial spaces on Chicago’s West Side, the shambolic album feels more immediate than some of the band’s more esoteric fare. As the merry prankster of the indie rock set, Kinsella still straddles the line between surrealist poet and agitator. With a Tortoise-inspired groove and Kinsella’s abrasive rasp, album single “This Must Be the Placenta” will thrill adventurous listeners and continue to infuriate Joan of Arc naysayers. Kinsella wouldn’t have it any other way.

Growing up, did you feel like you inhabited a different headspace than other kids?

I was definitely an outsider as a kid, until the tribe of punk rock adopted me at 11 or 12. Until then, I was always looking in on things from the outside.

Does this Joan of Arc record feel more abstract or surreal than previous efforts to you, or more mainstream?

I don’t really think in those terms, as nothing in the band gets decided in those terms. You get deeply invested in the collaborative process and start to develop a shared language and sequence of internal codes. From the outside, when you’re not in the process, anyone who heard the conversations about how decisions get made in the band would never understand the terms. The making of the record is this shared journey to discover these terms together. We’re creating a new language together, and the output is the inevitable by-product. We had nine hours of source material that we were cutting up into 23 songs. The best 10 or 12 songs didn’t end up on the record, it was the best sequence of stuff. The songs did end up shorter than we originally intended, so maybe that translates to more accessible or immediate. That was just a result of us wanting to get more songs on the album, not us trying to make it more appealing.

Do you intentionally enjoy fucking with people’s heads?

Of course! It’s more about wakefulness. This guy said a really funny thing to me the other day. I got a two week membership to a gym, and since I didn’t know anybody, I said, ‘Well, this is gonna be weird.’ The guy said, ‘Just don’t look at anything too close.’ It just popped out and it struck me as really profound. We’re surrounded by all these symbols and signs of psychic oppression and power. It’s how our lives are organized and mediated. The primary mission of poetry is to make the ordinary strange. I’m interested in waking people up. How weird that we’re alive at all, and how strange it is that this is how we’ve chosen to organize it. There’s so many interlocking systems of oppression and injustice. We’re fucking with people’s heads because people’s heads need fucking with. It’s not about us being bratty. I don’t know what else I can contribute to the world except that I absolutely love feeling awake, alert and present. I want other people to know how good that feels.

Do you wish five years hadn’t passed between Joan of Arc albums?

I don’t wish that at all. It didn’t feel like a break to me. During that five years, there was an Owls record and some touring. We made a collaboration record. I made a box set of five new solo albums. I published two books. It was more activity than ever. I was pretty shocked when we finished this Joan of Arc record and everyone at the label was like, ‘Wow, it’s been five years!’ We’re all grownups, man. The youngest member of our band is 37. There’s a lot of other stuff going on.

Do you enjoy collaboration more than working solo, or are they both equally rewarding?

It’s such a yin/yang thing. I spend a lot of time alone. It’s not uncommon for me to go 72 hours without speaking out loud. Then, I snap back into the realization that I need to be around people. Me and the dancers in our performance group all got stoned the other night for the first time. Since we’re in this weird city and staying in a hotel, it took a minute to find weed. We got high and immediately started doing this ‘critic’s panel’ on the hotel room paintings. The next morning, the Panamanian guy in our group was like, ‘Dude, I’m never getting stoned with you again. You’re way too intense.’ I think about that Drake line a lot: “Fuck a vacay/ I feel better at work.”

Are your personal musical tastes more mainstream, or are you constantly searching for stuff that pushes that envelope?

I listen to a lot of Adele. I listened to a lot of Kanye until his Trump visit. The ‘Is Kanye an asshole’ question is like ‘Is Morrissey an asshole?’ It’s beside the point. He’s an entertainer and I’m inspired by daring. I also listen a lot of Arnold Dreyblatt and Terry Riley daily. I have a DJ setup in my living room, so if I’m at home I’m constantly switching records. It’s all instrumental or electronic. I don’t feel ashamed by anything I listen to. I don’t like U2, Metallica or Bruce Springsteen, but pretty much every other music in the world is great.

Is the majority of indie rock too safe these days?

I wouldn’t know. It’s a really amazing time for hip-hop, techno and even pop radio. The production values in pop are so much wilder and more daring than rock bands. I’m going to sound like a caricature of a guy who’s been in a band a long time: The one commonality in the music I listen to is that there’s no guitars. I never hear music with guitars unless I’m in the grocery store. I associate indie with guitars, and that’s not on my radar. I think pop music getting more interesting is a real barometer of social progress. I can’t say conditions on the ground are improving that much, but the shared mind is opening. The fundamental conservatism of ‘90s pop music was that it just needed to be this surface thing, whereas contemporary pop music is digging in. It’s expansive and liberating.

With the emo revival, as a guy who likes to chop it up and start fresh, I’m assuming you’re not a big fan of nostalgia.

It’s like having a seafood allergy. You may love scallops, but if you eat them it will make you sick. When the first Joan of Arc record came out [1997’s A Portable Model Of ] all the emo people hated us. While we were in Cap’n Jazz, we were like, ‘Man, these emo bands fucking suck! What is this bullshit?’ We just couldn’t relate. Joan of Arc started as a self-conscious distancing from what we had been associated with. It’s very weird now that those early Joan of Arc records historically get included as part of that movement. I wouldn’t go to an emo night, but it’s not because I have some idea of myself that I’m trying to live up to. It just sounds like a bad time to me.