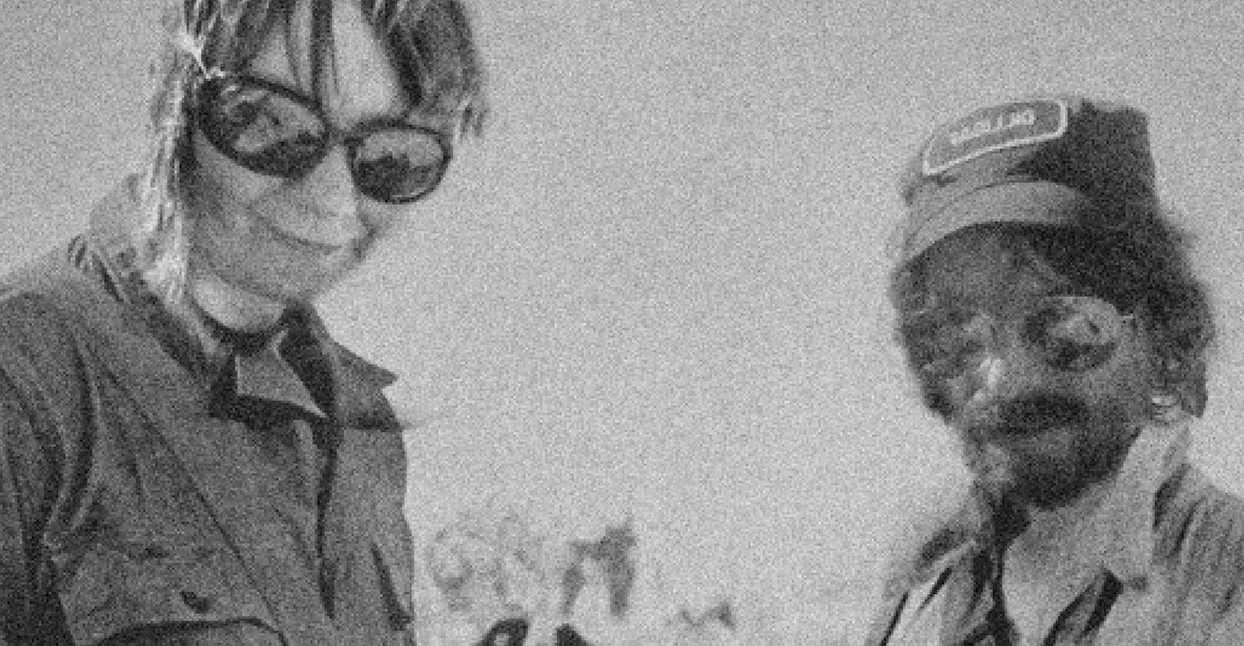 Making sense of No Map, the debut from Swiss duo J&L Defer, takes some doing. Not because it’s impenetrable or forbidding—but simply because it because it doesn’t operate according to any rule book other than its own. Anita Rufer and Gabriele De Mario, who are also members of the group Disco Doom, took the phrase “Nowhere, to no one” as their North Star for No Map, and set out to make a record that appealed purely to their own impulses. The results are delightfully disorienting: “Hard Fiction Road,” with its prinpricks of guitar and blinking synths, seems to be seeking some common ground between reggae and free jazz; “Johnny, Dream” is a tense, ominous ballad full of deep-set, gloomy guitars and dreamy, dead-eyed vocals. To call it “psych” would be too limiting: No Map has its own agenda, resulting in music as spacious and full of possibility as the pitch-black night sky. We chatted with Rufer and De Mario to try to solve some of the album’s riddles.

I can’t get my head around what it is you guys have done here—and I mean that as a compliment. The press release says you’ve created a record, “without any concern for the outside world.” How does one even go about doing that?

Anita Rufer: I think it’s just the process of going into our practice space, which is two floors under the surface of the earth. It’s losing the connection to the outside world, and also losing yourself just by playing and replaying the songs.

Gabriele De Mario: When we started to record, we didn’t want to rely on formulas—like “chorus / verse / chorus,” stuff like that. We just said, “Let’s just do whatever we want to do.” We have another band [Disco Doom] where we’re a little more into an indie rock thing. But here, from the beginning, everything was possible. It was, “Let’s try out marimba, let’s try out Bedouin drum sound—whatever.” And then let’s use our filters to try to pick out the good stuff.

It sounds like the recording process was kind of free-form. Was it mostly improvisational and jam-based, or did you have some loose structures for each song?

De Mario: There are a couple of songs which came from jam sessions. “Transition,” the first song—that was a 12-minute jam that we loved, but we weren’t sure if we should release it in that form. So we tried to make a song out of it. “Johnny, Dream,” was a live recording that we did it in one take.

One of the things I noticed is the way you use, specifically, guitar. You get so used to hearing guitar in the traditional rock format, where it’s just driving forward a melody. You guys use it more for texture.

De Mario: Anita and I, we’ve been playing for years together. When Anita starts to play, I just follow her blindly. It’s easy for us to play together and have a certain sound. We didn’t want to make an “indie dream” or “indie rock” record. We wanted to use the guitars differently. I mean, I love classic indie rock. But we wanted to make the guitars sound different. Sometimes, the guitars sound like trumpets. And that came naturally.

Listening to this in the context of the work you do with Disco Doom, what it reminded me of was someone like Brian Eno, who can jump back and forth between rock-driven projects and more ambient, spacious work.

De Mario: I think it’s really important for us to explore other possibilities in music. We don’t have pressure to sell a gazillion records, so we take that freedom. We don’t want to get bored. We try to explore different stuff. Brian Eno—it’s great that you mentioned him, because if I didn’t know where to go in a song, I would listen to Here Come the Warm Jets. It’s just a great inspiration, the freedom you feel in that record. He did whatever he wanted to do. It’s always great to listen to that record to come back down to earth and get inspired.

Was there a specific song where it felt like you unlocked the way the record was supposed to sound?

Rufer: No [laughs]. It was kind of a strange process, because normally, we write 12 songs, and the record will be 12 songs. But this time, we finished more material, and we had somehow to choose what would be the album. We had a lot of synthesizer stuff which now isn’t really on the record. For me, the album came together at the end, when we decided what would make a good selection of songs.

De Mario: It’s always difficult, because we even change the settings on the [mixing] board after each song. We don’t want to make it easy on ourselves, so we change the whole thing every time. Then at the end, we try to put the whole thing together and make a story out of it.

Let’s stay on that image for a second: you talk about “making a story” out of the final songs. That’s interesting to me, because I feel like the vocals are also used more as texture on this record. Did you have a clear narrative and clear themes behind the songs?

De Mario: From the beginning, we try to limit everything. We don’t want to use a lot of overdubs—we want to record music we’re able to play live. And we also record to tape, so we don’t have 200 tracks. So from the beginning, there’s limitation in our music. And that’s key: the more we make music, the more we want to have those limitations. Because for us, limiting the instruments opens up the music. The listener maybe hears things that aren’t even in the music. It keeps the imagination engaged.

What you’re saying about limitations  reminds me of Lars Von Trier and Dogme 95—“You have to make a movie, but it has to stay within these limits.” And that does force you to think outside the box a little more, as opposed to just saying, “Well, I’ll just use this trick because I can.”

De Mario: Oh, yeah, it’s really important. There are songs on this record that we recorded on four-track. We just grew up with those machines—four-tracks, eight-tracks. 16-track is our maximum. We just love to work like that. Nothing against computers, we just love the warm sound and the limitation.

Rufer: It became our way to work. It’s always, “There will not be more than 16 tracks, sometimes only four.” And that fit very well with the idea that we’re a duo, and we don’t want to have to overdub things that we can’t play live.

De Mario: It also prevents you from having the mentality of, “Ah, we’ll just fix it later. I can record 30 more tracks and we’ll just pick the best.” You work in a different way with the tape machine. You try to really capture the atmosphere from the beginning.

Rufer: For this record, we didn’t record track-by-track very often. We recorded a lot live, together. Some of the songs you hear are first takes.

You mentioned a few times that you didn’t want to have anything on the record that you couldn’t play live. Do you see these songs changing when you get into that live setting? Or are you going to stick with those pre-set limitations?

De Mario: I think it’s a bit of both. There are some songs that need to be played the way they are on the record, because we play to a drum machine. So some songs that need a specific arrangement because of that technical aspect. But there are also songs like “Johnny, Dream” or “Hell” where we just go on, and could maybe play them each for 20 minutes. We want to try to keep it free. Because that’s the main difference between what we do with Disco Doom and what we do with J&L Defer. I really enjoy playing J&L Defer shows, because it’s so free. Sometimes it’s hard to free your mind and go to that place where you’re really free on stage. But I really enjoy that, when it happens. And it happens a lot with J&L Defer.