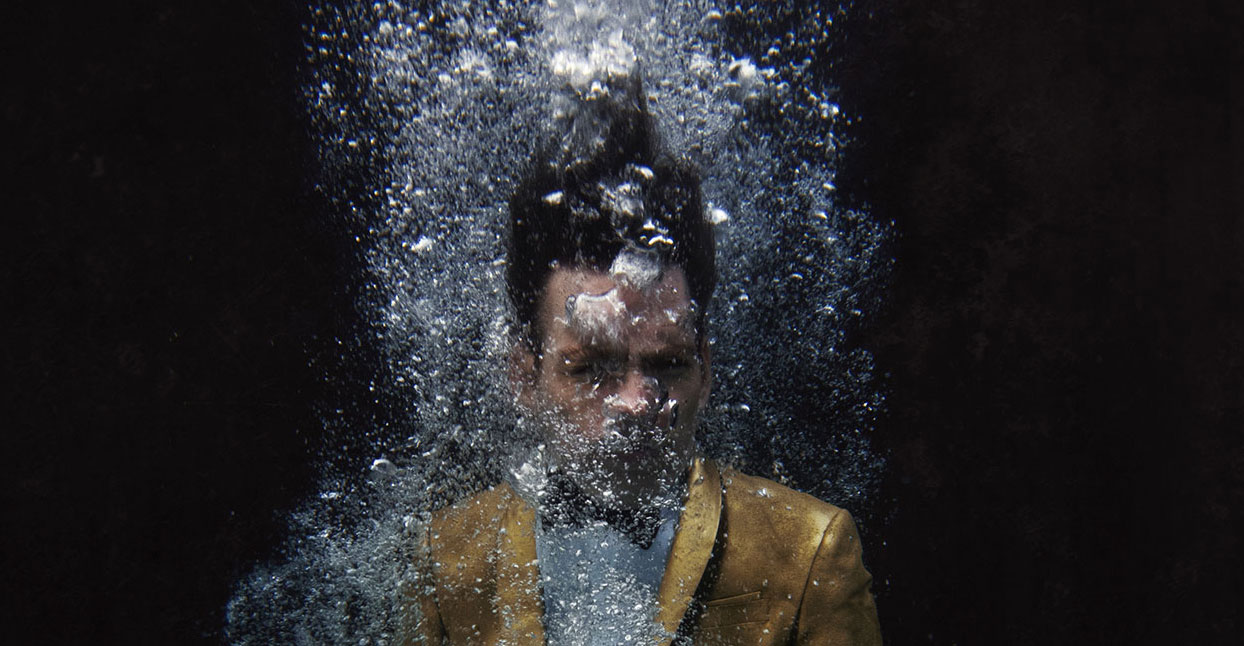 “I was raised on a sailboat, and we traveled these vast distances at a very slow pace. Making music in the cistern reminded me of that.”

With upcoming projects in Times Square and Royal Albert Hall, Jherek Bischoff is proving himself to be a major creative force in the pop-classical scene. A versatile performer, composer, arranger and producer, Bischoff was deeply involved with the DIY indie rock scene before changing course unexpectedly to a more classical vein. His versatility as a musician has since caught the ear of artists and critics, leading to collaborations with creative minds like David Byrne, Neil Gaiman, Caetano Veloso and Al Gore.

Bischoff’s new album—Cistern—is both a continuation and a departure from his previous work. While he continues to write for varied ensembles in a hybrid indie-classical style, Cistern breathes deeper—and for good reason. The album’s slow-moving tracks were inspired by the composer’s experience playing in an empty two-million-gallon water tank. With a 45-second reverb decay, the tank nudged Bischoff to paint with broad musical strokes, which, despite their breadth, are so finely detailed as to alter the way one listens. Like a meditation in sound, the music encourages us to focus intensely on each and every facet of its richly decorated texture.

The result is a fresh take on the minimalist tradition of the 1960s that preserves its repetitive nature while carving out a vast and resonant space. And of special note is Bischoff’s kaleidoscopic use of timbre—forever “painting” the same notes in different instrumental colors as they build toward a climax.

Bandcamp caught up with Bischoff to chat about the inspiration behind his new album, the compositional philosophy at work, and the various challenges he faced while piecing it together.

As far as I understand, your new album’s title—Cistern—is to be taken literally. It refers to the giant water tank in which you improvised some of the basic materials for the album. Even though the album wasn’t recorded in a cistern, how did your experience playing in one influence the creative process?

When I first went into the cistern, I didn’t have any specific intentions. It was just about improvising and experiencing the space. But when I started to play, improvising the motif from the song “Cistern,” I realized how magical that place was. And I knew it was a new path that I’d be on—that I’d make a record.

When you play music down there, you have to slow everything down to such an extreme level that it changes the way you play entirely—the way you think about music. And so I used how the cistern inspired me to play as inspiration for the compositions on the record. But since I only had a guitar when I was in the tank, the pieces that I improvised there were later augmented to fit a larger ensemble. And other pieces on the record were written with that acoustic space abstractly in mind.

Aside from the cistern itself, did any other personal experiences shape your compositional mindset as you were working on the record?

The way you have to slow everything down in order for the music to work down there brought back some of my childhood memories. I was raised on a sailboat, and we traveled these vast distances at a very slow pace. Making music in the cistern reminded me of that. In the end, the record was completely inspired by the space, but the childhood memories it brought forth inspired me further to keep everything at a slow pace and give the impression of traveling long distances—to somehow capture how this impressive reverb makes you think about space and time.

In addition to the space itself, this album is quite different from anything you’ve done before, in part because it’s exclusively instrumental, but also because you were writing for a much larger ensemble. How did this experience compare to previous ones?

On [my first album] Composed, I recorded each instrument one at a time and blew it up into a 60-person orchestra using one mic and layering, which took for ever. But on this record, I got to record the ensemble live, which required a different kind of editing.

As for the instrumental aspect of the record, I’ve always written both kinds of music—vocal and instrumental—but I feel that more people listen to music with vocals on it, so the real challenge is getting this music into people’s ears.

And circumstance also plays a role. There was a time in which I was working on Composed, and I had all of the mixes for the music done, but no vocals. So I thought to myself, maybe I’ll put this out as an instrumental record. It sounded good on it’s own, and I was fairly happy with it as it was. But a few days laters, David Byrne replied to an email I’d sent asking him to sing on Composed, so obviously I took the opportunity to work with him.

Turning back to Cistern, as a listener, I found the music beautiful, meditative, and expansive. It breathes in such a way, and at such a pace, that there’s actually time to hear everything—to focus your ear intently on each component of the sound coming through the speakers. Is this highly detailed listening a kind of listening you were trying to foster with this project?

Absolutely. And I’m glad you listened to it that way. That’s exactly what the cistern does to you as a player. In any space you play music in, you’re collaborating with that space—you’re always changing the way you play to accommodate the acoustics. The cistern itself is so reverberant that it forces you to be extremely clear on your ideas, and also to be more detail-oriented with textures than usual. Every inflection—a vibrato, an accent, and so on—reverberates throughout the space, so you can’t help but notice everything. The compositions on Cistern try to honor that space and that time, which naturally leads to a different kind of listening.

Speaking of fine details, I was struck by your sensitivity to instrumental timbres—to the ways in which the different sounds of the instruments combine and play off of one another. The effect is such that, despite the slow-moving nature of the music, there are always new flecks of light on the instrumental canvas, so to speak, reinventing the sound as you go. How do you approach writing for so many different instruments? How do you create order out of it all?

A lot of this music is, on the page, very easy to play. Contemporaneous is an incredible New York ensemble that can rip these really intense pieces that are fast and frenetic, and I handed them music where some members have the same note for an entire piece, which seems ridiculous for such an accomplished group. But to play the music of Cistern well is to focus on sound and texture—to try to pull as much out of these long notes as possible. And that’s also a compositional challenge—to keep the interest alive by renewing the sound despite its static character.

The conductor David Bloom and I experimented a lot. For example, a lot of the songs on Cistern use an unusual vibrato—a very slow one—and we discovered that using a wide vibrato in the low end of the orchestra made the ensemble sound out of tune. But keeping the low instruments steady with the high instruments’ vibrato gave an unusual wavering feeling, which, when placed in a reverberant space, started to do some really cool things.

And there’s also the fact that playing slow music gives you the luxury to think about each note—to get into the texture and dynamics. And having such a varied ensemble allows you to do a better job of that.

Closely related to this issue of timbre is what I would call musical form—the shape of your music. More specifically, I noticed that many of your tracks build as they go, adding instruments to reach a climax, and then dissipating that built-up energy to bring the music to a close. How do you judge the pacing of these musical arcs? How do you know whether they’re building and falling at the right places? Is it just an innate feeling? Or is there something more methodical behind it?

Typically I’ll have a core idea off of which melodies start to grow. And then melodies start blossoming off of those melodies. I make sure that each melody has long enough in its own cell to be fulfilling. It’s hard sometimes to know if you’re going to be engaging the listener long enough, but there’s a certain feeling to it.

Something like “The Sea Son,” for instance, is a really long piece—it’s all about feeling like you’re in the middle of the ocean drifting. So why would I rush that? I prolonged the sound as long as it felt right, trying to balance the introduction of new elements with time to create something that keeps your attention. But I also think this balance changes with context. When I play that piece live, we don’t play it as written. I play it as I’m feeling it in the moment.

I was fascinated to learn about your affinity for Philip Glass’s score to the film Dracula, because it features short instrumental pieces with obsessive repetition that somehow still seem to evolve from beginning to end—very much like your music on Cistern. Do you feel his influence in your music?

Philip Glass’s stuff feels to me like it could be played by a rock band, so that’s why it grabbed me right away. If you crank that stuff up it sounds like punk music. I actually had the whole Dracula soundtrack worked out on drums, and it gave me a seed of inspiration to make chamber music, but to make it louder and a little more rockin’. The short tracks, which aren’t typical of much classical music, also fit more with my musical world.

Moving forward, do you plan to continue working in a classical vein?

I actually have three more records that are finished in my brain: one is a chamber record that is instrumental, but with energetic pieces; one is a Roy Orbison style record, which is quite a departure; and one is a synth-pop record that’s all vocal. So I’m all over the place at the moment. I’m certainly always going to have my feet in the orchestral/chamber world, but for the time being, I’ll just let Cistern happen and see where it takes me.