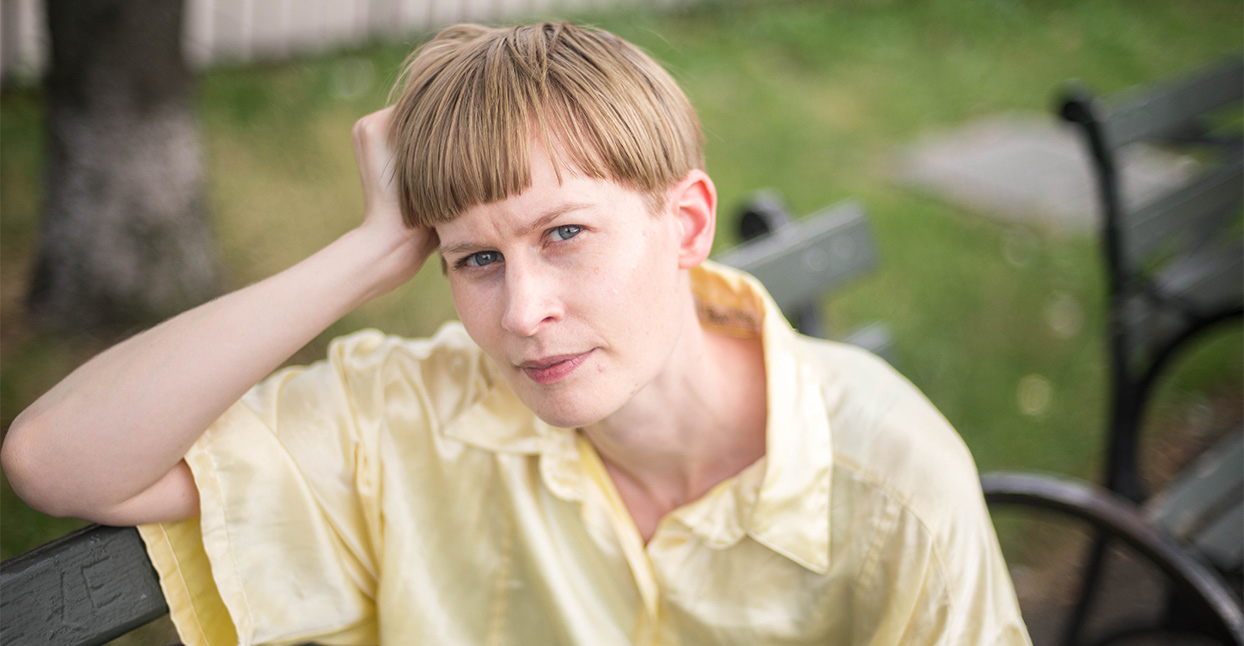 Jenny Hval came of age just after her native Norway’s black metal movement, with its dark occult affinities, started gaining notoriety. Her first band was a goth-metal outfit named Shellyz Raven. So it’s not too surprising that her new solo album, Blood Bitch, is populated by vampires. Early in our conversation, Hval asks me if I’ve ever met a vampire. When I ask her the same question, she replies, “There are definitely some people I’ve met, especially in my goth past, who I think wanted to be vampires so much that who knows where they ended up?”

There’s an audible smile in Hval’s voice when she recalls her early musical adventures. “My first band was called Shellyz Raven,” she says, “spelled with a ‘zed.’ I joined the band later, so I had no say in the name. Everybody in the band was obsessed with that movie The Crow. But we couldn’t call the band Shelleyz Crow, because that would be too much like Sheryl Crow. So we had a problem. We solved it by going with ‘Raven.’”

Hval describes her time in the goth scene as, “Some of the happiest memories from my youth. For me, that scene was very magical. It was problematic, too, because it was so old-fashioned. Everybody was reading H.P. Lovecraft and wanting to look Victorian, which was crazy. But it was okay [in that scene] not to fit in. I came of age slightly too late for the really exciting part of the black metal scene—that was Norway’s punk scene in the beginning, before it got commercial. It was a dangerous scene. It was also, unfortunately, very, very male. But it had youth power. So there was still some of that energy left when I was in my teens.”

These days, Hval mostly makes experimental art-rock. Her last solo effort, 2015’s Apocalypse, Girl, was widely praised for the way Hval exploded musical and intellectual boundaries. A fan of Meredith Monk, Jenny Holzer, Kate Bush, and Tracey Emin, Hval learned from these women to be particular—to experiment, to incorporate many layers of reflection and observation, and to do it all in a pithy, challenging way. She’s especially fond of Holzer’s witty truisms—perhaps the inspiration for Hval introducing the phrase “soft dick rock” on Apocalypse, Girl.

So what, besides her goth past, inspired the move from soft dicks to fanged women? Hval’s fascination with vampires wasn’t cultivated via elaborate cosplay or ancient literature, but rather through somewhat campier means. “I was watching a lot of horror films from the 70’s,” she says, “Especially movies by the filmmaker Jess Franco. Some of these films have vampires. They’re not very scary, these vampires—a lot of elements in these sort of exploitation and horror movies are just excuses for women to be naked. But there’s something about these films I found very interesting. Because they’re so low budget, they can’t really give you the ’perfect illusion,’” she explains. “They’re not really made to be interesting in terms of narrative. So instead, it’s like peeking into this world of very human, very low-budget perversity—which I really enjoyed. They’re more vulnerable than movies that are considered exquisite, dramatic masterpieces.”

Hval found herself relating more to the takes on gender and capitalism in these films than she does contemporary cinema. “I found that the material—that trashy, sexualized, and kind of ugly, not very well-made material—was more interesting to me, and [aligned with] a lot of themes that come up in feminist and political discussions in the present. I went to the ’70s and found a lot of trash, but I found it to be more relevant to our time than a lot of stuff that is made now. There’s something wonderfully ’not-quite-capitalist enough’ about it—not perfect enough. There’s sex, but it doesn’t really sell. Or, it sells, but not so much. There’s too many pubes and too many regular bodies. They’re also just poorly-filmed little stories, and there’s not much morality in these films.  These vampires—these trashy young woman vampires—took over my world.”

Lasse Marhaug, who produced Blood Bitch and Apocalypse, Girl, helped kickstart Hval’s obsession with low-budget horror. “I brought up that fact that film directors like Kôji Wakamatsu, Jean Rollin, and Jess Franco were able to work in the context of commercially-motivated cinema,” he says, “but they still made highly personal films within those confines. They would cater to a demand by producers and audiences, but they made the films so cheaply that they could fuel them with their own obsessions and politics. I lent Jenny some of my Jess Franco films, and she responded especially well to his low-budget films of the early 70’s. These are slow-moving, melancholy, weird movies that are more arty than the market they were made for. We used the freedom we found in those films as one of the inspirations for the album.”

The vampirism in the music videos that accompany Blood Bitch is more covert.  Hval describes the video for “Female Vampire,” in which girlfriends suck each others’ skin off, by saying, “In a sisterhood, there’s always this mystical connection between people. You can’t ever really explain why human closeness is so affecting. There needs to be mystery. It’s romantic. We want to look at friendship as romantic and eternal. It’s this idea that eternity doesn’t have to be this lonesome figure. It can also be this very comforting and very equal part of a collective, where you share something—it’s like the skin is shed and shared, and it’s an ongoing transformation.”

Zia Anger, who directs many of Hval’s videos and provides the visuals for her live shows, says that designing a video with Hval isn’t laborious, because the two tend to be on the same wavelength. “There is never much talk about what we are interrogating,” she says. “We send each other a lot of references—pictures, videos, music, text—and develop a visual lexicon for the video or performance. Oftentimes, when we have read and looked at all we can, the music video or performance automatically comes out. It’s like it already lived in me, or in us, and it is just vomited out. Usually, she just lets me go for it. I’ll present the idea [for the video] to her in a frenzy, like, ‘1950s house, women, shaking, flour, white horses,’ and she just trusts me that it will work out.”

“Female Vampire” is an understated video—nuanced, and very slow. It’s the perfect mirror of Hval’s fascination with boredom, with seeing what one can achieve with minimal effort.  On Blood Bitch, Hval explored a new approach to vocals, trying less hard to sing. It’s easy to read this desire for detachment as an extension of Hval’s fascination with the malaise running through the vampire movies she watched. “There’s a certain type of ’interesting boredom’ in these films,” she says, “because they are quite boring. You have to watch other things. I start zoning out because the camera movements are often very same-y: you zoom in, you zoom out. Those things are very fascinating, because they start to do something to you as a spectator.”

While Hval may revel in certain kinds of boredom, her work ethic remains as rigorous as ever. When Hval and Marhaug were recording Blood Bitch, they cut up all of the songs they had recorded, then repurposed those sounds into other, new songs. “We recorded more material than would fit on an album,” says Marhaug, “So we would chop things up, and use bits of songs as building blocks. Some pieces that only appear as short sections on the album were actually much longer originally. Jenny is brutally critical of her own work and edits like a mad butcher. We had a couple of really catchy pop songs that were abandoned in favor of a seven-minute sound collage. There are sonic elements which are just as subversive and intimate as the lyrics—subliminal sounds, tiny details and references.”

While Hval has become known for dramatic, high-energy live shows, she isn’t sure that the Blood Bitch performances will maintain that level of visual voltage. However the show evolves, the intent is that the audience will come away not only thinking differently about vampires, but feeling them differently as well. “The vampire’s always written as a kind of caricature,” Hval says. “There are so many ways to write the vampire and write the eternal character. There are so many unexplored ways of writing about outcasts and human subjects. It’s such a symbolic and important literary character, because it holds the power of eternal life. The vampire is such a political character. We tend to see people with any kind of ‘otherness‘ as threatening us. And when I say ‘us,’ I mean the majority of people in some countries. There are so many political conflicts that revolve around not seeing people. It’s dehumanizing.”

If Hval seems especially insightful and level-headed, it’s at least partially a result of her repeated viewings of A Virgin Among the Living Dead and Vampyros Lesbos. She reflects on the female vampires depicted in those films. “I liked the idea that they were, on the one hand, sex objects, but on the other, they were objects that had a really interesting sort of power. They’re not shaped well enough, they’re not trying very hard to do or to be anything in particular. They’re not even very sexy vampires. They’re just like, ’Ooh! Naked body.’ I think you have to see a lot of these films in order to get into this way of being. It’s like a Zen philosophy thing.”