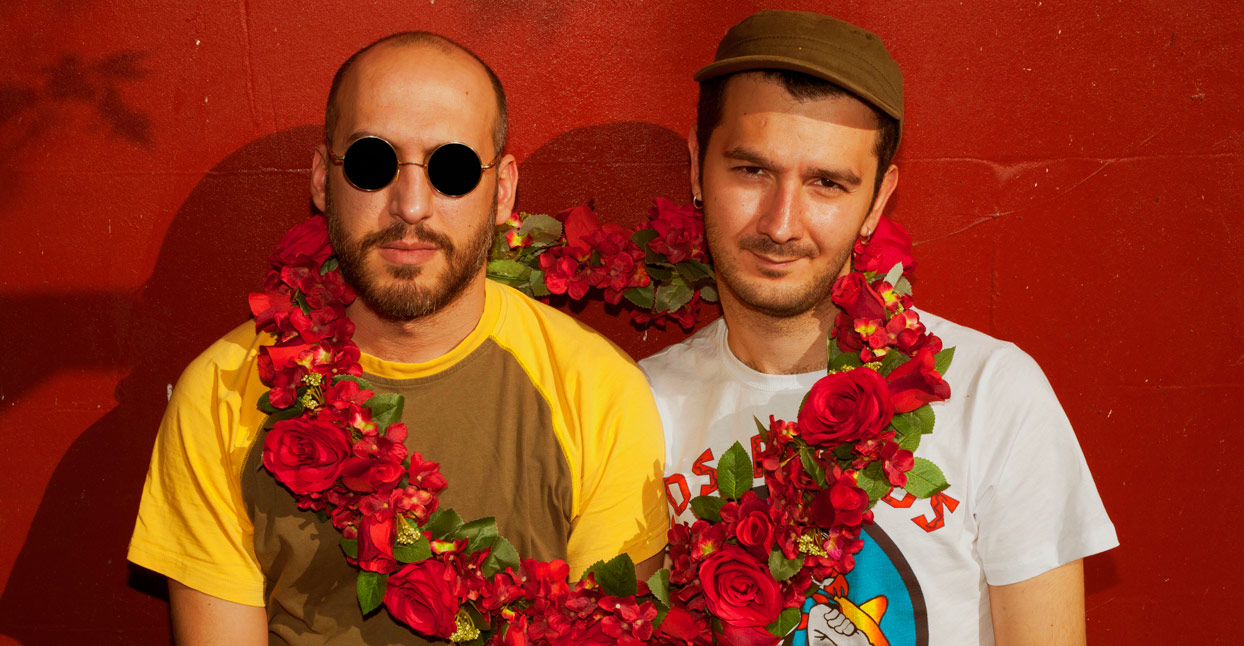 If you’re not familiar with mainstream Turkish music, allow us to set the scene: imagine the most overblown and fantastical elements of modern pop enthusiastically paired with a glitzy, ‘80s aesthetic and a generous helping of traditional Middle Eastern folk. You’d expect the result to be over-the-top— too indulgent, perhaps—but, instead, they’re shot through with a special kind of sincerity. When Turkish pop singers step up to the microphone, they mean every single, rhinestone-studded word.

Fantezi Müsik is both the name of this glammed-up genre of Arabesque pop and the title of the debut album by Jakuzi, the Istanbul-based duo of Kutay Soyocak and Taner Yücel. The pair have created their own 21st century take on their home country’s time-honored sound. Fantezi Müsik finds plenty of inspiration in the duo’s local scene, but it also borrows from classic new wave, synthpop, funk, post-punk, and the British sophisti-pop movement of the mid ’80s. It’s a potent mix that seems unlikely to come from a single band, let alone a single album—and, sometimes, a single song. Imagine Duran Duran imbued with Joy Division’s emotional grittiness, but still embracing the odd saxophone solo or Casio keyboard beat.

Jakuzi songs like “Her An Ölecek Gibi” use rubbery basslines and dream-pop guitars to create the sort of lovelorn ballad John Hughes would use to soundtrack a prom scene; “Aptal Bir Inat” is a perfect juxtaposition of heavily-reverbed, heady instrumentation, with a plonky piano that could be pulled from a cabaret lounge singer’s repertoire. Even the album artwork hints at this duality: a man in a hooded mask, maniacally grinning, peers out from the LP cover, but he’s wrapped in red roses and standing against a bright yellow background. Like the record itself, it’s both edgy and completely tongue-in-cheek. “We have been collecting those sort of masks for a while now, and we like them very much,” explains Taner over email, a few weeks before Fantezi Müsik’s release. “Since the name of the album is Fantezi Müsik, which is a kind of mainstream Turkish Arabesque sub-genre, we wanted to take that term and put a completely different image of what ‘fantasy’ means to us on it.”

Having cut their teeth in Istanbul’s underground punk scene, Kutay and Taner formed Jakuzi as a way to broaden their musical horizons and try their hand at something more personal and melodic. “Growing up, we listened to cheesy Turkish songs, but later on we started listening to metal, punk, new wave, post-punk, et cetera,” Taner says. “Now, we don’t pay much attention to genre. Some of us continue to play in punk rock projects. The point isn’t getting sidetracked by other genres—it’s just more fun to make music across multiple disciplines. We always say that Jakuzi might have been a metal project as well. Synthpop was just on our musical bucket list.”

It’s hard to imagine Jakuzi’s music coming from anywhere other than Kutay and Taner’s personal, lived experiences. And not only because Jakuzi sing in Turkish—which is more of a practical decision than an aesthetic one. “Kutay writes the lyrics,” says Taner,  “and besides, we feel more comfortable expressing our feelings in our own language. When we started the band, we didn’t think about any sort of strategy about touring or playing in the rest of Europe.” The language is beside the point; when listening to a song like their new single “Bir Düşmanım Var,” which brims with enough forlorn grandiosity to make Spandau Ballet quiver in their shoulder pads, you don’t need to understand a single word to understand that the song is a lament to a bygone relationship. “Lyrically, the album is mostly about judging yourself, describing your feelings, fighting your demons,” says Taner. “We know it doesn’t sound like it from the music, but the lyrics mostly come from a dark, pessimistic place.”

Turkey’s musical landscape was shaped as much by its unique culture as its long history of political turmoil. Anyone with even a working knowledge of current foreign affairs will be familiar with the nation’s current upheaval, but the new generation of bands are equally affected by the fallout from the country’s political climate in the 1980s.

“After the coup happened in 1980, the classic concept of ‘band music’ died,” explains Taner, referring to the period after the 1980 Turkish coup d’état in which, among many other violations, large swathes of media and culture were banned by the government. “People who were in bands went to jail or into hiding, and that period became the rise of pop and Arabesque music. For the past 35 years, that kind of mainstream pop music became the taste of the general public. In fact, it still is—if you hear Turkish music today, it will probably be of this cheesy variety. New styles of Turkish music only came to be in the late ’90s, and now, more and more new bands are touring the world, introducing our music to new,  international audiences.” Even now, in the digital age, Turkish bands are dealing with arbitrary setbacks: Jakuzi mention that PayPal recently had to cease operations in Turkey, due to the country’s financial regulators rejecting their business licenses. This has been a crushing blow to an artist community that supports itself through Internet word-of-mouth.

But the artistic community is working to create change in Istanbul’s underground. “Lubunya”, a Fantezi Müsik highlight that deals with Jakuzi’s solidarity with trans rights and trans visibility in Turkey, is the perfect example. “Luckily, we haven’t experienced any attacks directly, or can call our spaces unsafe,” Taner says. “But within the rise of conservatism in Istanbul, as well as the entire country, people are beginning to be attacked for their personal ways of life more and more. In regards to the LGBT community, they have always been alienated by our society, even though we have had transgender pop stars like Zeki Müren or Bülent Ersoy. It doesn’t make sense, transphobic and homophobic people have no problem listening to music [by trans and gay pop stars]. It’s hypocritical, but it has always been in that way.”

Speaking to Jakuzi, you get the impression that they have their finger perennially on the pulse—not only in Turkey, where they swim decidedly against the current while subverting the mainstream to their own outsider ways, but also in the world at large. They know that the global stage is probably ready for a Middle Eastern act that figuratively speaks their language while literally singing in their own. With the Istanbul underground rallied behind them and Fantezi Müsik as their calling card, there’s no telling how far Jakuzi will get in challenging the international perception of Turkish pop.