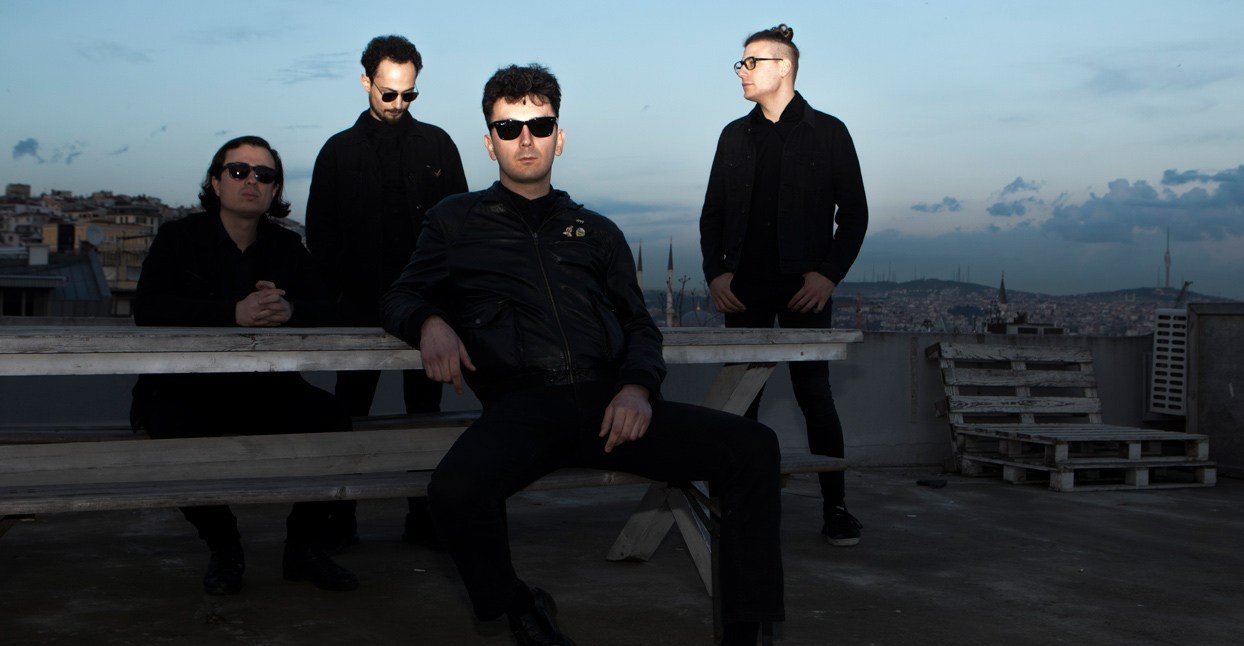 The dark synth-pop outfit Jakuzi love to provoke. That’s partially due to their background—principal members Kutay Soyocak and Taner Yücel have roots in Istanbul’s underground punk scene. But it’s also because they have a particular knack for arresting visuals. In the video for “Istediğin Gibi Kullan,” from their 2017 full-length debut Fantezi Müzik, the pair are subjected to physical manipulation by a male and female domme while their drummer looks on in disinterest. (At one point, he decides to kill time by playing Candy Crush.)

The visuals for Jakuzi’s second album, Hata Payı, are just as evocative, and also deal with the intricacies of power dynamics and isolation. In the video for “Şüphe,” an actor and an actress warm up before a dance recital. At first, their moves and interactions are graceful and rife with flirtatious tension. But then, an unsmiling figure arrives and glares at them both from offstage. Suddenly, the mood shifts from collaborative to antagonistic, and an undercurrent of violence begins to bubble up as the formerly jovial dancers begin to ooze menace and malice. The video for “Toz” features a solitary figure dancing and contorting his body in sparsely decorated rooms and spaces, both bathed in and obscured by disorienting strobes and shadowy lights in a rainbow of harsh hues.

“I wanted to create a dark image for Hata Payı,” Soyocak says. “The name of the album, the cover and the videos are completing this whole aesthetic in a way. Our first album Fantezi Müzik was a space that we wanted to try different styles. If we compare the albums, they are both inspired from the same era, but with Hata Payı, we turn to the gothic side of that era.”

Unsurprisingly, the album’s sound is also much darker, driven by brooding synths and deep, resonant vocals tinged with sadness and isolation. Hata Payı also deliberately leans more toward post-punk; Soyocak was inspired by bands like the Cure, The Sisters of Mercy, Clan of Xymox, and Linea Aspera. This translates into a more guitar-forward sound—”Sana Göre Bir Şey Yok” has a backdrop of shadowy riffs, while “Gördüğüm Rüya” starts out as straightforward rock.

Soyocak was also immersing himself in Middle Age philosophy, French poetry by Rimbaud and Baudelaire, and classic fantasy and horror novels like Bram Stoker’s Dracula, Robert Louıs Stevenson’s The Strange Case of Dr. Jekyll & Mr. Hyde, Goethe’s Faust, and Neil Gaiman’s The Sandman. The parallels between modern society and the bleak, existential themes of this literature cast a long shadow over Hata Payı.

“My main inspiration was the Middle Age social problems, diseases, and poorness, which caused humanity to create and believe in fantastic stuff such as vampires, witches, [and] unnatural beings,” Soyocak says. “I feel that the social problems, system, wars, and the whole world is sort of having the same era. Political and economic depression made me try to create a gothic alter ego.”

Hata Payı‘s lyrics are both desolate and intensely personal. Jakuzi once again sing in Turkish, but the translation of “Yangın,” for example, hints at an intense emotional crisis: “Who am I? / I’m not sure anymore / I wanted many things without knowing / Come and see exactly who I am / I’m a two-legged nervous breakdown.”

“On the first album, the lyrics were talking to a second person besides myself,” Soyocak explains. “But in this album, the lyrics are all about what I tell to myself.” This perspective shift led to more vulnerability, although he weathered the progression without a hitch. “Accepting your vulnerable points makes you define [yourself] and overcome.”

The success of Fantezi Müzik gained Jakuzi a healthy international audience, and afforded them high-profile opportunities, including opening for one of their biggest artistic inspirations, John Maus. But for Turkish bands, trying to build a sustainable career isn’t without its challenges. The country’s economy “is really gettng worse everyday in here,” Soyocak says. “This effects our standards in a bad way. Buying new equipment or recording in a studio is getting harder each day, also when touring it is more expensive than it used be.” (Luckily, Jakuzi’s “production method is basic,” he shares, so they are less affected by this trend.)

And although Soyocak says Istanbul has many bands across multiple genres—trap is thriving in both the mainstream and underground, and “punk-connected” sounds are percolating beneath the surface—the club and touring landscape is less hospitable. “We love Salon IKSV very much,” he says, referring to a performance venue associated with the Istanbul Foundation for Culture and Arts where Jakuzi has two nights booked in April. “They support local bands and people like to watch gigs in there. There are small clubs as well.”

However, “the main issue is trying to survive just with music,” he adds. “The audience is small compared to the population of the city, so you are not able to play often. Achieving success is not easy. Even people who listen to your music generally don’t attend concerts that much. There aren’t many opportunities to play outside of Istanbul except in one or two cities, so the meaning of success is probably different.”

For Jakuzi, however, sticking to their artistic vision is paying off, and they’re sanguine about any attention coming their way. “It is such a nice feeling to know that your music got attention in wider audiences locally and internationally,” Soyocak says. “I don’t think this was a pressure on my creation process [for Hata Payı]—but I look forward for the feedback from our audience.”