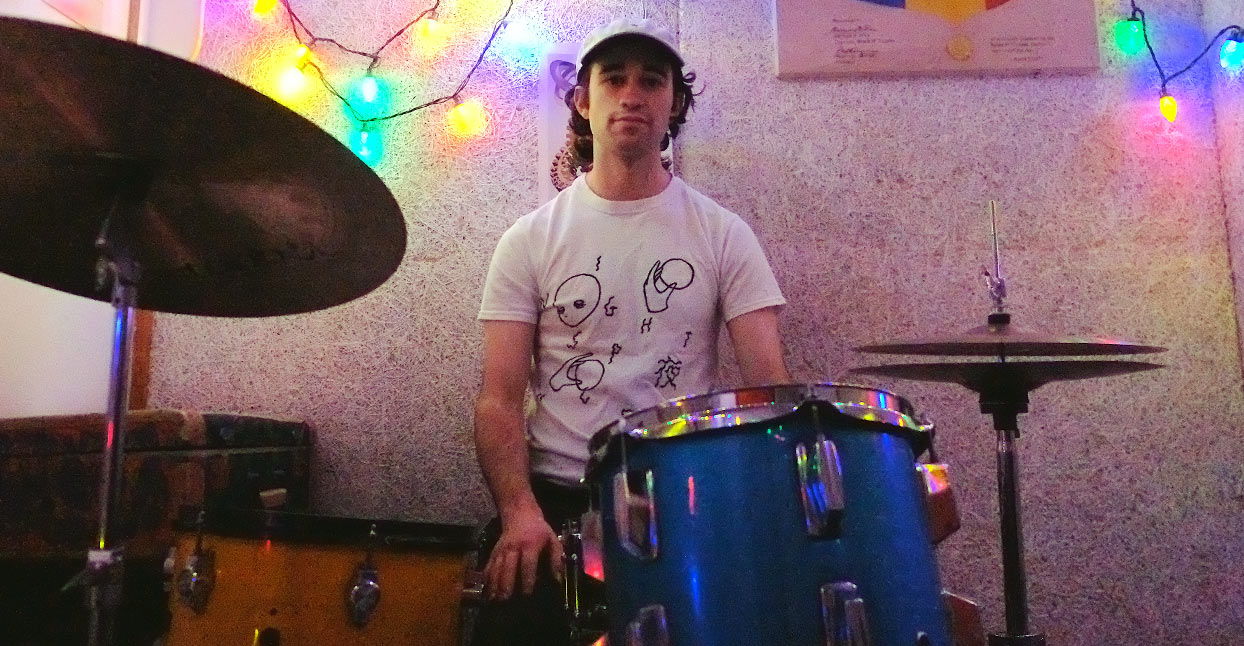 It’s not unusual to feel somewhat underwhelmed after a first casual listen to BATTERY. In fact, that’s kind of the point. Though it scans at first as a two-piece, ramshackle, synth-and-drums outfit, BATTERY is actually the work of one man: Los Angeles-based drummer/coder/composer Jacob Richards. Richards is something of a career musician—his resume includes stints in no fewer than 10 bands, including percussion for New Zealand-by-way-of-LA twee-pop band Shunkan and studies with luminaries like Rakalam Bob Moses. With BATTERY, Richards employs Nintendo-esque synth textures and lockstep drum patterns to create songs that are deceptively simple in sound but incredibly complex in composition.

He accomplishes this through a programming language called ChucK. ChucK allows Richards to create sequences of notes that he activates by hitting one of his drums. In his programs, he has additional code that allows those sequences to be accessed by the drums in different ways. For example: on his latest album, bloom, Richards rigged his drum triggers to change the song’s note sequence any time he hits the tom. This allows him to spin the song off in countless different ways with a simple flick of his wrist. It’s like he’s splitting himself up into several different pieces and then jamming with them in real time.

And while the final song sounds impressively streamlined, what’s happening behind the scenes is almost brain-breaking in its intricacy: Richards writes the melodic sequences, figures out how they relate to one another, determines which drum accesses which sequence, and then arranges the sequences while he’s drumming to create the final composition. Richards is exploring new means of composing and “actualizing” music, bridging the gap between the banality of pre-recorded electronics and the braininess of improvised free jazz. His goal is to explore new methods of experimental composition, making them more inspiring for the artist and more accessible to the audience.

We talked with him about the theories undergirding his work, and the way he implements them in his music.

To start, you’ve got kind of a counter-intuitive approach to the way you work. So I thought we’d start by asking you a big, philosophical question: What is music?

Music, to me, is organized sound. ‘Organized’ can mean a lot of different things. The sound of two car horns unintentionally honking at the same time, the sound of a door slamming—any of those could be interpreted as ‘organized sounds.’ In a way, any sound can be music, but a human must hear the sound in order for it to be music.

I think what I do with BATTERY has pop culture appeal, because of its video game references [in the melodies] and the overall aesthetic. But it’s also definitely an experimental project, because I am trying to find a way I can create a complete musical experience with just a drum set. I think that drummers in the mainstream are already using a lot of electronic elements, like the Roland SPD-SX sample pad. Drum triggers are really the next step for drummers to advance their ability to cover even more parts of a song. The drum set was invented to put all of the instruments used by percussionists in the early 20th century into one easily-accessible place. So it makes sense that the next step for the drum set is to add the functionality to play other instruments, or to at least determine the parameters of what other instruments are playing.

How does BATTERY incorporate quotes and samples?

In “Lavender Town,” I play through a song that was written by someone else—in this case, a Pokemon song—and then I improvise on it. This is very similar to the practice of improvising over jazz standards (I do it on “Evidence” as well). I felt it was important to include these songs, because I feel like they ground the music in two aesthetic and cultural areas: jazz and video game music. I’m interested in continuing to improvise over well-known songs as part of BATTERY, but this material will always be eclipsed by the amount of original material I write. It’s just a way of saying, ‘This is the world in which I define my music.’

What is it about playing in BATTERY that brings you joy?

The joy of BATTERY, for me, is the simultaneous feeling of constraint, freedom, and power. I am constrained by the medium and by the way my triggers work, and I have the freedom to improvise within those constraints and to take the music where I want to take it, at the tempo I choose. I feel powerful, because I am creating an entire piece of music (that is often quite loud!) solo, which I haven’t often been able to do in performances as a drum player. I don’t think any of these things conflict with the audience’s goals. A good audience wants to hear honest music that they can relate to, and I feel that BATTERY offers this.

You drum with such restraint on bloom. In what ways is BATTERY a minimalist project?

The project exists only because I decided to do everything as quickly as possible. I wanted to get to the music-making part as quickly as I could, so I wrote very simple song forms in code. I’ve always focused more on the coding part in the past (I come from a mathematics and science background), so it was refreshing to look towards the music—the end result—rather than the coding.

But wouldn’t the coding become another type of “minimalist pretense?”