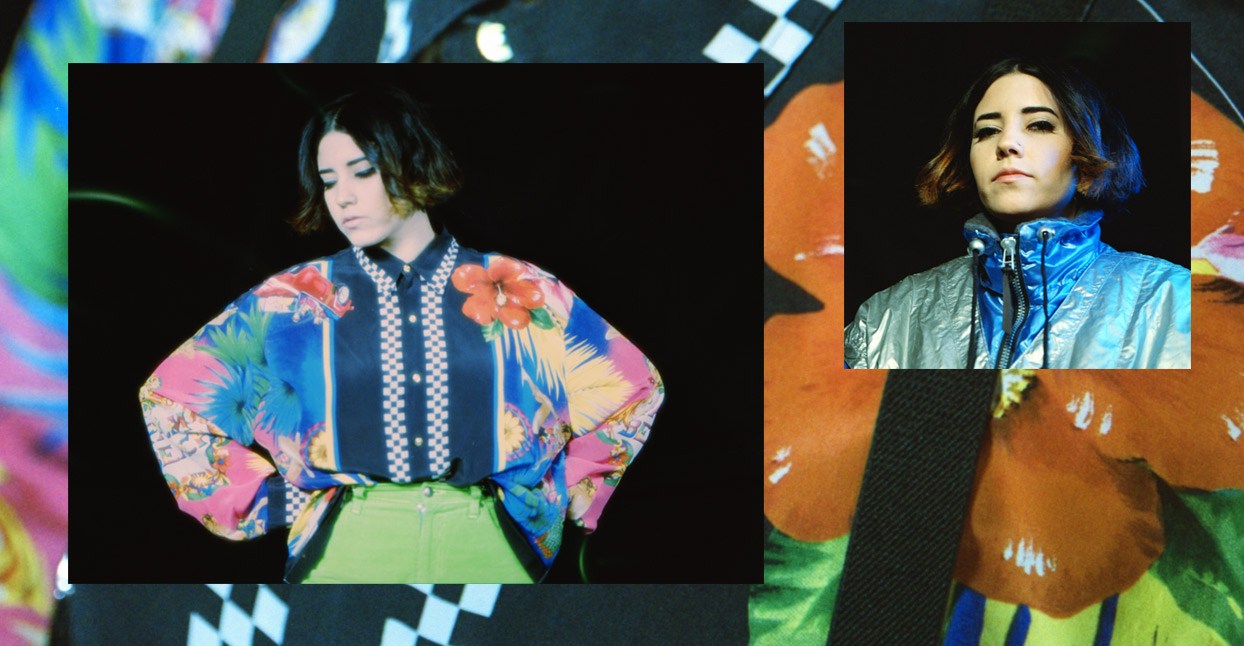 Jackie Mendoza’s debut album, LuvHz, feels like it was made underwater. The rhythmic synth blips and deep echoes on opening track “Mucho Más” sound like the sonar pulse of a submarine. The steady percussion, like a faint heartbeat, throbs beneath liquid synth lines, capturing the sound and sensation of swimming across the sea. “Mucho más, más allá”—“There’s a lot more, beyond”—Mendoza sings. “Lista para tratar los misterios del universo”—“Ready to deal with the mysteries of the universe.” That the track eventually transforms into a quasi-industrial Dembow party is an added bonus—a revelation of Mendoza’s character, her playfulness, and her winding path through the world.

The album’s aquatic atmosphere is not entirely accidental. “Maybe it’s from growing up in San Diego, seeing the beach and being near the ocean my whole life,” Mendoza says. “Which is funny, because I’ve never been a beach person. I guess it’s also that feeling that I don’t know what is underwater, and I want to guess what it sounds like under there—to recreate what I think it sounds like.”

Born and raised on the border between Chula Vista, California and Tijuana, Mexico, Mendoza grew up in what she describes as “this middle area that wasn’t the U.S., but wasn’t Mexico either; it was both combined.” Accustomed to navigating constantly between the idiosyncrasies of two distinct cultures, Mendoza absorbed the sounds of Latin American music and percussion, and combined it with her love of dream pop, techno, and reggaeton to create a brand of electronic music that celebrates the beauty and the slipperiness of being a queer, Mexican-American woman raised in a borderland. LuvHz is a celebration of artistic and personal freedom for Mendoza; it’s a collection of deeply personal stories—sung in both English and Spanish—about love, loss, longing, and finding solace in art.

“I [think about the album] like an outer space astronaut who just landed on a beach, and is so confused,” Mendoza says.“I felt that way growing up a lot. I felt out of place, like I had to fit in, to be this person that everyone was trying to be. I didn’t really understand a lot of the social norms. In my music, I can express that.”

Mendoza’s journey into electronic music, like much of her life, was atypical. After following a promising path into a musical theatre program at a university in Chicago, she quickly realized that she was not as passionate about the craft as everyone around her was. She briefly returned to San Diego, eventually packing her bags and moving to New York City, where she joined the dream pop band, Gingerlys—her first exposure to playing music on a stage and collaborating with other artists.

“A few months after I joined the band I started thinking, ‘I could do things myself,’” she says. “I have these other ideas that I want to do. I started taking this course for production, a Beginners 101 on Ableton. I learned how to produce electronic music. I also started going to clubs, partying a lot, and that made me want to make music that sounded like that, instead of indie pop or indie rock.”

Mendoza began composing the songs on LuvHz in 2015, writing on an electric ukulele and filtering and pitching down the sound of the instrument using pedals and production software. She found an ally in producer Rusty Santos (Panda Bear, Animal Collective), who collaborated with her to help create the album’s sound: industrial meets trap; reggaeton meets pop and techno. “Puppet Angels,” the album’s closing track, reflects this fondness for hybridization; driven by a hard techno beat, but submerged in aqueous synth sounds and periodically punctured by sharp spikes of static, the song addresses Mendoza’s feelings of being alienated by the homogeneity of suburban life in Southern California.

LuvHz, which was written at a time when Mendoza was considering coming out to her conservative parents, is also an exploration of love. Its songs explore the feelings that accompany new romance, the heartbreak of past relationships, and, in the case of standalone single “De Lejos” (“From Afar”), the sweet moments lovers carve out for themselves, even when they’re far away from each other. Considering how personal the stories in these songs are to Mendoza, it’s interesting that she sings in character, not only as a nod to her musical theatre roots, but also as a way to let herself be vulnerable on stage. “I use a specific voice when I sing,” she says. “It’s almost like this character. [This character] is someone that is freer, more carefree, but also gets hurt by every little thing. It’s a person that feels everything way more amplified.”

With LuvHz, Mendoza not only wants her listeners to be able to identify themselves and find solace in her music, she also wants the album to be a gateway for her fans in the United States, Mexico, and greater Latin America to get to know her and to know that they can make music that falls outside the rock and pop that they know and love.

“I just want the album to be refreshing and something different,” she says. “I want people who speak Spanish to hear it, because I feel that in Mexico and in Latin America, people don’t get weird music that much. I want people to connect with it in that way—to know it’s OK to be weird, it’s OK to be different, and do things other people aren’t doing.”