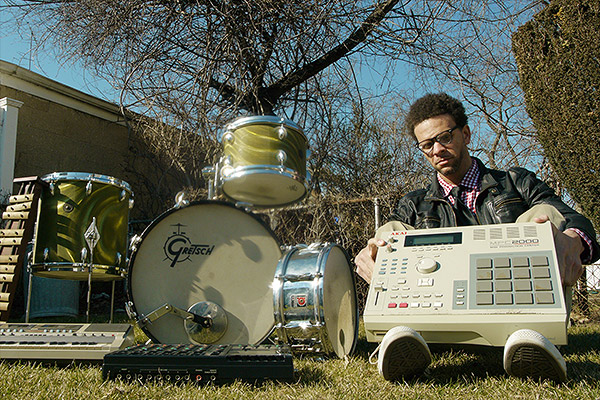 Now more than ever, rap music is divided. The ’90s are commonly referred to as the genre’s golden era, a time when artists from Nas and Snoop, to Dr. Dre and Wu-Tang Clan recorded its most celebrated work. It was a time before music streaming, when you could hear a wider variety of rap on FM radio, when lyrics were a bit more dexterous and sounded decidedly different than pop and R&B.

Older listeners want younger rappers to emulate that sound, to preserve the foundation of hip-hop while paying homage to its pioneers. The new generation of rappers isn’t always on board. “The ’90s get a lot of credit, I don’t really know why,” Long Beach rapper Vince Staples told TIME last year. “There’s not a 50 Cent in the ’90s. They didn’t even have a Kanye… Early 2000s is where it’s at.” His statements prompted “golden era” rapper Noreaga to viciously criticize Staples on Twitter, and he wasn’t the only one.

It’s this very debate that Queens rapper J-Zone pokes fun at on his new album, Fish-n-Grits. The bonus liner notes that arrive as a PDF with the purchase of the digital album contain a track-by-track dialogue between J-Zone and his self-described “pimped out alter-ego” Chief Chinchilla.

Throughout, J-Zone addresses current events with raw candor and humor. He pokes fun at skinny jeans and swag. He questions baggy clothes and grumpy attitudes. “Hip-hop’s generational debates have reached a boiling point,” J-Zone proclaims in the intro. “And both sides fail to realize, in the grand scheme of things, nobody gives a fuck.”

We spoke with the musician about the concept behind Fish-n-Grits, why the ’90s weren’t always so great, and what can be done to ease tensions.

Take me back to the beginning. How did you arrive at the concept for Fish-N-Grits?

I was in the music business for a long time. I’d made a bunch of albums and, around 2008 or ’09, I got really disgruntled and left the music business entirely. I was a sports reporter, I worked in a high school, I had a bunch of other little gigs — I wasn’t even doing music. I was trying to make this transition from the music business into the 9-to-5 world, but all my resumé said was, ‘Producer, rapper, DJ, writer, drummer, musician.’ I was having a hard time getting a 9-to-5 that paid even what music at its worst paid. That inspired me to make Peter Pan Syndrome, which they say is a comeback record, but I just call my return to music.

After I put that album out, I wasn’t planning another one. I had started playing drums as a late bloomer before that, so I really took 2014 to focus on learning my craft as a drummer. I started putting out these little 45s, these 7″s. I said, ‘Well, I’ll put an instrumental on one side, and I’ll put a rap track on the other side.’ I’ve always been a concept-album type of guy, so I think working in the medium of 45s and only focusing on two songs at a time allowed me to build up to Fish-n-Grits.

The first one was “Stick Up” and “Mad Rap.” When [former Clippers owner] Donald Sterling came out and said all that shit, then the players came out with their warm-ups inside out, I was like, ‘Oh, that was weak.’ All these dudes are multi-millionaires, now’s the chance to make a statement! And they didn’t. A lot of stuff was in the news, and I was known for being a comedic-style rapper, but I was like, ‘Yo, why don’t I experiment and do a joint where I just address all this stuff, and it’s not a funny record?’ I felt by doing the 45 format, it’d come off easier than me trying to stick it on an album full of jokes. As an artist, these are topics I never really touched on too much. I did “I’m Sick of Rap” and “Seoul Power,” that was another 45. I was just reflecting on things that I normally wouldn’t have touched in the past. Before I realized it, I was like, ‘Let me put these together.’ From a musical standpoint, I wanted to take everything I’ve ever done, and instead of making a linear concept album, roll all this into something that’s kinda like a resumé.

Since you’re touching on serious themes, and it isn’t as comedic as your previous work, how has the album been received?

People really like it. As artists, when we find something that works for us, we get scared to deviate from it. History has shown that when artists deviate from what they’re best known for, the results aren’t always good. I think the fact that I used the Chief Chinchilla character helps me maintain my sense of humor. It’s just not ‘Haha slapstick’ funny. It’s more tongue-in-cheek humor. But I’m addressing more serious issues. The humor is still there, it’s just that as I started to address more serious things, I passed the comedic thing onto alter egos. That way, I’m able to convey my message without sounding conflicted. I’m able to stay on the path I’m on. With the alter egos, people laugh at them because they’re silly, but they actually play a role in the records. They bring the comic relief, and the checks and balances.

What sorts of things did you go through while making Fish-n-Grits?

I made the record during a rough time in my life. My grandmother passed away while it was being mastered—she was very sick—and I was going through some personal things. Historically, when artists go through some hard times, the music is an escape. You put so much energy and soul into what you’re doing, because it distracts you from everyday life. When I decided to pool this stuff into an album, which was probably around October, I was going through a rough patch. My only escape was making music.

Your album addresses the chasm between older and younger rap listeners over music that feels pulled from the golden age of hip-hop.

As far as the generational conflict, a lot of people don’t want to admit it, but ever since Run-DMC came out, it’s been about youth. Run-DMC changed the face of rap. They said, ‘Why would we wanna dress like the disco guys? We wanna dress like the guys in our neighborhood.’ They simplified it, made it raw and street, and stripped it down. So if you were a young kid around 1986 and somebody played you Spoonie Gee, you might be like, ‘Yeah, naw, that’s before my time, that ain’t me.’ When I came into it around ’88, ’89, the Afrocentric movement was huge. So if you came around when Native Tongues and all that was out, if you wore a whole bunch of truck gold, unless you were Slick Rick, people would be like, ‘Yo man, take that gold off, that shit is wack.’

Around ’92, ’93, it became about being a killer—hardcore, and Das-EFX having the tongue-twisters. It was about having a style and a way of delivering. Then when The Chronic came out, it was about weed, money and cars. Now we’re a whole generation removed. The people who are creating music now are old enough to be our kids. Rap is so rebellious that it also rebels against itself. It rebels against everything, but the new guard is always waiting to take out the old hat.

With something like jazz, it’s just tradition. You still have kids today that wanna play like Tony Williams. They wanna play like Elvin Jones, Coltrane and Miles Davis. In jazz, there are new guys who are great, but all of them borrow from this tradition that was set in bebop, fusion and big bands. Hip-hop has always been about youth. My generation fucked up, because when young kids were trying to get into hip-hop, it was like, ‘Oh, get outta here, kid.’ We were Secret Squirrel with the knowledge. We didn’t wanna pass nothing down. I think that attitude made the young guys say, ‘You know what? Fuck y’all. We’re gonna do our thing.’ Whereas in jazz, tradition is passed down and musicians are allowed to grow. With hip-hop, it’s kinda like, the older cats resent a lot of the younger cats, and the younger cats rebel. There’s a rift between old and young. I just look at it as pro wrestling. I think the thing that makes hip-hop great is its youth and rebelliousness, but that’s also what gives so many artists a shelf life. They’re not able to pass on tradition because no one’s trying to hear it. I just wanted to highlight the ridiculousness of it all.

Is there a way to find a happy medium between old and young cats?

Musically, I think you can. But it’s not even about music at this point. It’s about nostalgia. Nostalgia is great, but it’s also dangerous. When a 19-year-old attacks a record from the ’90s, you feel like he’s attacking your memories, your childhood, your DNA. Let’s be honest, there were records in the ’90s that were wack. And if the ’90s was this golden era where every record was great, we wouldn’t have records like “Fakin’ the Funk,” talking about how wack rap had become. If you go back to 1992, ’93, every record was called ‘Keep it Real’ or ‘Represent.’ They were talking about how things had gotten so watered down. The most hip-hop thing you can do is complain. So if they were complaining about records in ’92, ’93, how were the records all 100 percent great? They weren’t!

Some of the records were amazing, some of the records were horrible. I think nostalgia clouds the truth a lot of the time. It’s more than just the music. It’s like, ‘Our era versus your era.’ Baggy clothes versus skinny jeans. There’s good and bad music of all regions, all genres, all periods. I had to learn that you can’t broad-brush, but some cats get joy out of broad-brushing. Just focus on making good music, don’t worry about era. There’s so much good music and they’re doing a disservice to say, ‘Fuck an entire era.’