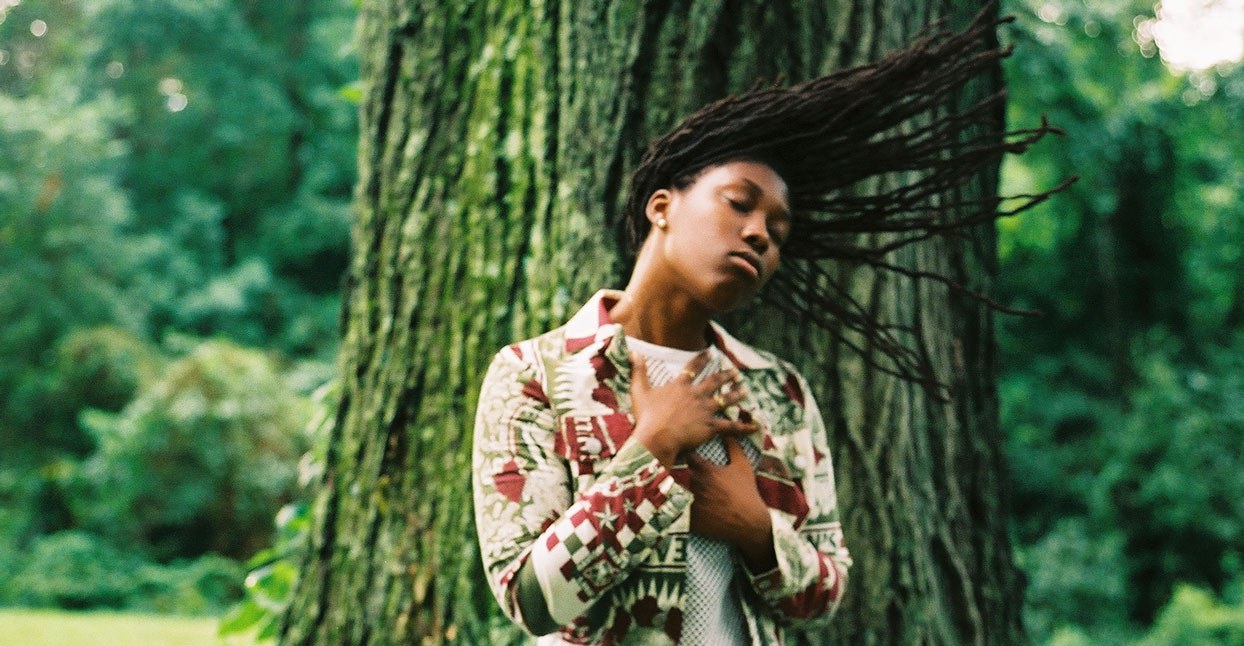 “I just love words,” Ivy Sole says matter-of-factly between bites of ramen, one of her favorite foods. Even in conversation, the Charlotte-raised, Philadelphia-based rapper has a way with words: she’s measured and eloquent, but also casual and colloquial. Those same qualities also carry over into her music. Somewhere between spoken word, neo-soul, and classic hip-hop, she’s unafraid to use words—however they may come out—to bring the details of her losses and triumphs to life.

The 25-year-old Sole cut her teeth watching HBO’s Def Poetry Jam; she cites Shihan’s classic “This Type Love” as a favorite. Church was also foundational. Her mother, who Sole says is a singer in her own right, was a founding member of said church, which kept her occupied in the sanctuary several days of the week. Outside, though, there was always music. Sole started playing violin when she was five and later picked up piano, clarinet, and bassoon. The early generation of so-called blog rappers—Blu & Exile, Dom Kennedy, The Cool Kids, Wiz Khalifa, Mac Miller—inspired her to pick up the mic. They made a rap career seem attainable to a then-teenaged girl in Charlotte who knew she wanted more.

“I knew from a really young age that the only way that I was going to get out of North Carolina was to be on some academic shit for real,” she says. “I wanted to be as lowkey and intelligent and on the books as possible so I could do what I wanted later. It worked in my favor.”

After high school, she attended the University of Pennsylvania to study business at its famed Wharton School. This was a sharp pivot from the medical field dreams of her childhood, but she hadn’t yet told her mom that her actual goal was to become an artist. She immersed herself in extracurricular activities that could hone her performance skills—a dance troupe, poetry, and even a bit of acting. It ultimately paid off. With her mom in the audience at the release party for her 2016 debut Eden, Sole won her support with talent alone. Coincidentally, that was also the tape that earned her an early cosign from Bandcamp, a source of validation, she says, which helped her push forward. “I was like, ‘Damn, that’s my first shit, and it doesn’t even sound the way I want it to. I could do so much better,’” she recalls. “It was nice to have that moment.”

Sole went on to release three more projects over the next two years, including her latest, Overgrown. She expands her blend of singing and rapping and sets it to production that ranges from somber, meditative compositions to bouncing, synthy beats. Her eclectic set of listening habits—which include left-of-center outfits like Unknown Mortal Orchestra, Japanese Breakfast, serpentwithfeet, and Pink Siifu—are evident here. While it is firmly rooted in hip-hop and straight-ahead lyricism, songs like the retro groove of “Bones,” or the deceptively buoyant “Wasted” reflect an artist who is interested in using all the tools at her disposal.

More than anything, though, Overgrown is a composite of all the rocky roads that led her to this point. It’s a refined work built around ideas of what it is to exist in the world as a “black, queer, radical” woman, as she declares on the opening track “Lovely Fiction.” She meditates on that experience, not just on her behalf but for the children she doesn’t have. That song in particular was inspired by anxiety that was fed by a dream wherein Sole was going to have a baby. It “scared the shit out of [me],” she says. Themes of motherhood and questions about what today’s actions will mean for future generations pop in and out—not enough to be a throughline, but enough to be an indicator of its place in her mind.

“All the -isms and phobias, I can’t imagine bringing a child into the world. It’s been heavy on my mind,” she says, noting that she’s at the age where friends are starting to get married and start families. “I wanted to make an album about what bravery is and how a part of being courageous is figuring out what you’re willing to do despite the fear.”

Throughout Overgrown, Sole is grounded by a higher power. Spirituality offers a safety net as she walks through life—in her ambitions, her partying, in her loving and her mourning. A song like the standout “Achilles” finds Sole sitting with the aftermath of a sexual assault and the quest for restoration. In the closing seconds, she offers a valuable reminder: “What happened to me isn’t my fault, but I do know that it’s my responsibility to heal.” Listeners come away with a sense of who Sole is, as if she’s pulled us into a one-on-one with her and shared her innermost thoughts.

Sometimes it feels like she’s telling herself all the things she needed to hear; at other points, it feels like she’s peering directly into our hearts. The closing track is a slow-burning prayer for peace and purpose, a stirring piece that encapsulates the soul of the album. “I don’t write anything that isn’t urgent to me,” she says, and every word lands accordingly. Her vulnerability becomes a mirror that reflects back the pieces of ourselves that we stuff away—the kind of music that is, both, confrontation and a place of solace. But for Sole, it’s, quite literally, deeper than rap.

“I think what the process of making this album—and also my life process to this point—has taught me is that music isn’t enough,” she says. “If I didn’t have my therapist, if I didn’t have my support system, music would not heal me in the way that I need to be healed. I don’t want to live a half-healed life.”