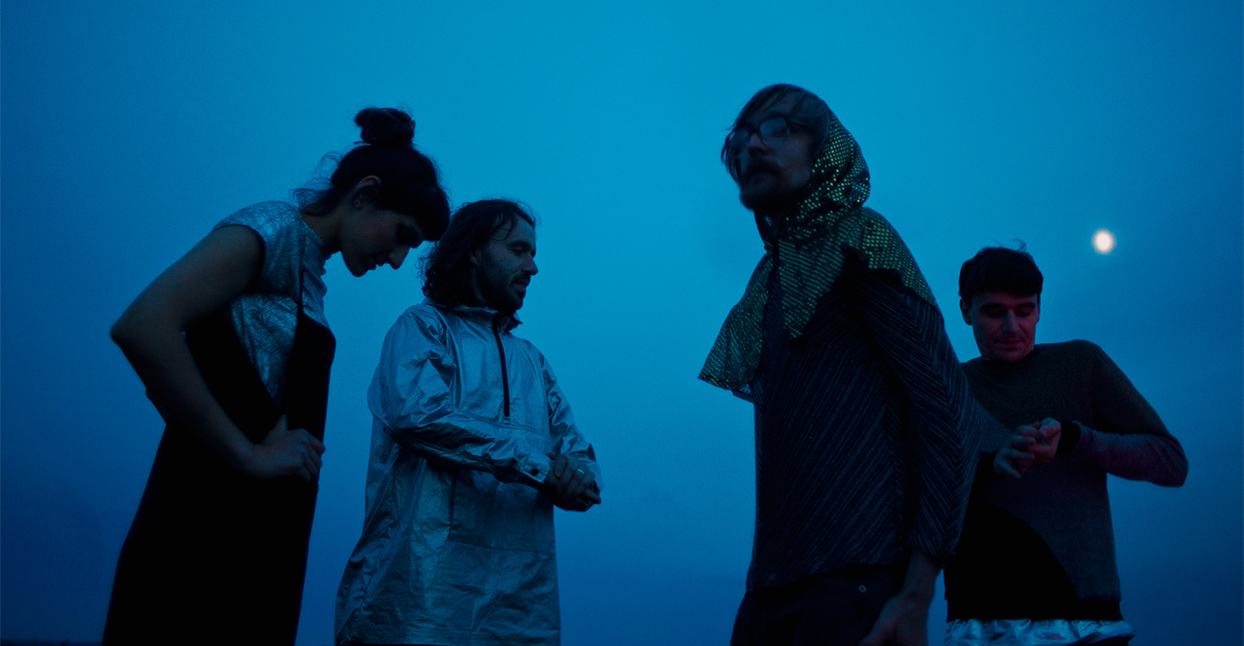 When Islet arrived in 2010, it would have been easy to view the defiantly DIY Welsh quartet as a bit of a gimmick. No member of the band held a fixed role. Live, they frequently switched instruments with one another, and would run around the room chanting and using a venue’s walls to create impromptu percussion. At a time when blogs governed taste, it was widely reported that Islet didn’t even have a website. (They did—but so many journalists claimed they didn’t that nobody bothered to look for it.) Fortunately, the quality of their music outweighed any appearance of novelty; their songs wove together wild chants, rabid percussion, and slippery guitar—like Gang Gang Dance, if they’d come to life in Henry Cow’s Cambridge.

In the three years since their last album, Released by the Movement, Mark and Emma Daman Thomas got married and had a kid, and moved with Mark’s brother JT to the rural Radnorshire village where the Thomases grew up, leaving Alex Williams behind in Cardiff. “It’s not like we feel isolated from music,” Emma says. “That was a really big reason for us to move up here, because we knew we’d be able to make sounds virtually anywhere, because it doesn’t affect anyone. It makes such a big difference to have that freedom. And I really like the idea of going away and making something where nobody else would know what you’re doing.”

Their latest EP Liquid Half Moon, released through the band’s own Shape Records, came together in a barn at the farm owned by the Thomas boys’ parents, and finds Islet trading the murky atmospheres of their last record for focused songwriting. All of its songs were written before the UK voted to leave the EU (and America elected Donald Trump), but they’re filled with an undercurrent of anxiety in the face of mounting xenophobia. The whirring guitars of “Utopian Gnome Sanctuary” add darkness to Emma and Mark’s overlapping lyrics about how, “The right gnomes are white gnomes/ The wrong gnomes have no homes.” On “Slide Out of View” and “Mem Pal,” the group addresses human loss and fragility; and “Final Drive” crystallizes the way that tradition is often valued more than recognizing injustice: “Alright alright/Let’s not make this a problem,” Mark chants over lilting guitar, playing the part of the passive bystander.

In the coming months, Islet will focus on their third full-length record, which they’re also self-producing in their Radnorshire barn. It can be hard to find time to record around raising a toddler, but Emma says part of the reason it’s manageable is because she and Mark are only half the band. “It’s very much not our ship,” she says. “I’ve been thinking about this a lot. We are a collaborative band, and that’s a lot of the reason why I am so passionate about it. There aren’t that many collaborative bands—or they exist for a short period of time, and then burst into flames because it’s a difficult thing to hold onto. You have to set your ego aside.”

“We are, without a doubt, in the best place we’ve ever been,” says Mark. “Very enthused by each other, and in a really creatively fulfilling and excited, looking-to-the-future place.”

“We’re very loved up,” Emma affirms. “We’ve realized what a precious thing collaborating is. It’s not an easy thing to do. The older you get and the more responsibilities you have, it can be tempting to just want to do things your own way. That’s why I love Islet so much and that’s why I think it’s important: Because of our collaboration, and showing the power of people working together.

When a band makes a record on a farm, it’s usually because they want to do something stereotypically ‘rustic.’ Liquid Half Moon isn’t what people think of when they think of rural music. It reminded me of Aphex Twin.

Emma: That was a really exciting thought for us, that we would go into this barn and absorb all our influences. Our aim has always been to sound like we could be any gender, any race, from anywhere, as far as we can. There are people around here who have never left the county. I think it’s really exciting that we can bring the city here, and we can bring in amazing experiences that we’ve had in our lives and continue to make art. Another thing that really inspired me to move up here was something that the North Walian visual artist Bedwyr Williams said: If he’s gonna be poor anywhere, he might as well look out of the window and see the mountains. And that is exactly why we moved. Because we’re gonna do the same and we’re gonna try as hard as we can to make art and not be crushed by reality. We might as well do it here.

You’ve been away for a while. When did you get the bug to make this EP?

Mark: This is an in-betweeny section of Islet music, where we’d played quite a lot of it live.

Emma: It felt like the end of that period of time, and we felt that in order to move onto the next record we’d have to complete this batch of songs. With “Slide Out of View,” I was rehearsing drums in the barn and thinking about that sensation of having a person growing inside of you while you’re doing something that is very much not connected to having a small person growing inside of you. Some songs are from that period of time, some are older. All these songs were written pre-Brexit, pre-[the US election]. I wouldn’t like to say that there’s a definitive way of reading them at all, but also I wouldn’t like to pretend that I had some greater insight. Like most people, I was very naive as to what would happen this year.

You’ve always been engaged, but I wondered if those anxieties became more acute as you became parents.

Emma: I wouldn’t say that actually at all. One of the things I least like is when people say [gasps] ‘As a mother I understand the future of humanity more than you.’ With “Cathays Terrors,” some of it is in part about [our son]. But we were talking about Kendrick Lamar’s “i,” and JT was saying that he’d written that song about overcoming depression as a gift to his fans. I thought, ‘Well, I definitely can’t do that, but perhaps I can write something that is imbued with some sense of joy.’ I wasn’t even thinking about fans, because I don’t know who those people would be. But that was my attempt at a gift to the other people in the band, because I love them so much.

“Final Drive” and “Utopian Gnome Sanctuary” confront xenophobia to a certain extent—the latter feels as though it could be about the refugee crisis. How have you noticed that in your community? Wales voted to leave the EU, right?

Emma: Yeah, so that shattered the illusion of living in an exceptional place. I don’t think that everybody who voted for Brexit is a racist, but it certainly opened the floodgates to a lot of ill feeling. I’ve been thinking about this more than I ever have before, because I’m a mixed-race person. I’ve never talked about that in an interview before—I‘ve never felt that I have to, nobody’s ever mentioned it before. But I feel different in this country now than I did six months ago. There’s been no change in how anyone has behaved towards me or us in our rural community. But I feel like it does affect us everywhere. I’ve noticed that people sometimes get really defensive if you say, ‘This is really scary, and I feel intimidated by what’s happening.’ They’ll say, ‘But we’re fine in the countryside, everyone’s really nice.’ And it’s like, everyone is really nice, but I don’t think we can say that that’s the overall tone of the entire nation.

Mark: It feels like so long ago [since we wrote “Utopian Gnome Sanctuary”]. So much has happened in the world since then that you forget what the landscape was like before that.

Emma: But we were worried about it then. When I was thinking about “Final Drive,” I think sometimes we live in an echo chamber. There are other members of my family, and the Indian side of my family, who live completely different lives—like, they have arranged marriages that they want, that they choose, for reasons that are almost beyond my comprehension, because we’re so culturally different.

Mark: Dan Deacon wrote something quite cool on Instagram, saying we should follow the people we don’t want to hear, otherwise we don’t know that it’s happening.

Emma: That’s an interesting point. I think, though, it’s good to surround yourself with people that you feel safe with—to share information, and talk to people that make you feel welcome. It’s this kind of time that everyone goes,’Right, I’m going to make a political album,’ when very few people can probably do that in a way that makes sense—though it’s worthwhile trying. I don’t wanna lie and say that this EP is some deeply-meant political thing, when maybe I haven’t thought about it enough. There’s times like this when you can go, ‘What is the point, throw it all in the bin, what’s the point in making this silly thing?’ But I think actually it’s really important to create and keep going and chip away and make things happen, even if it’s just slightly pushing at the edges and the boundaries. Slightly leaning on it and bending it, pressing it and seeing if it can give a little bit. I’m not saying that we’re going to crush down the establishment, but if we can gently all press and bend, I think that maybe we’ll show new ideas to people. And I think that’s what we’ve always wanted to do—to make people feel like anything’s possible.