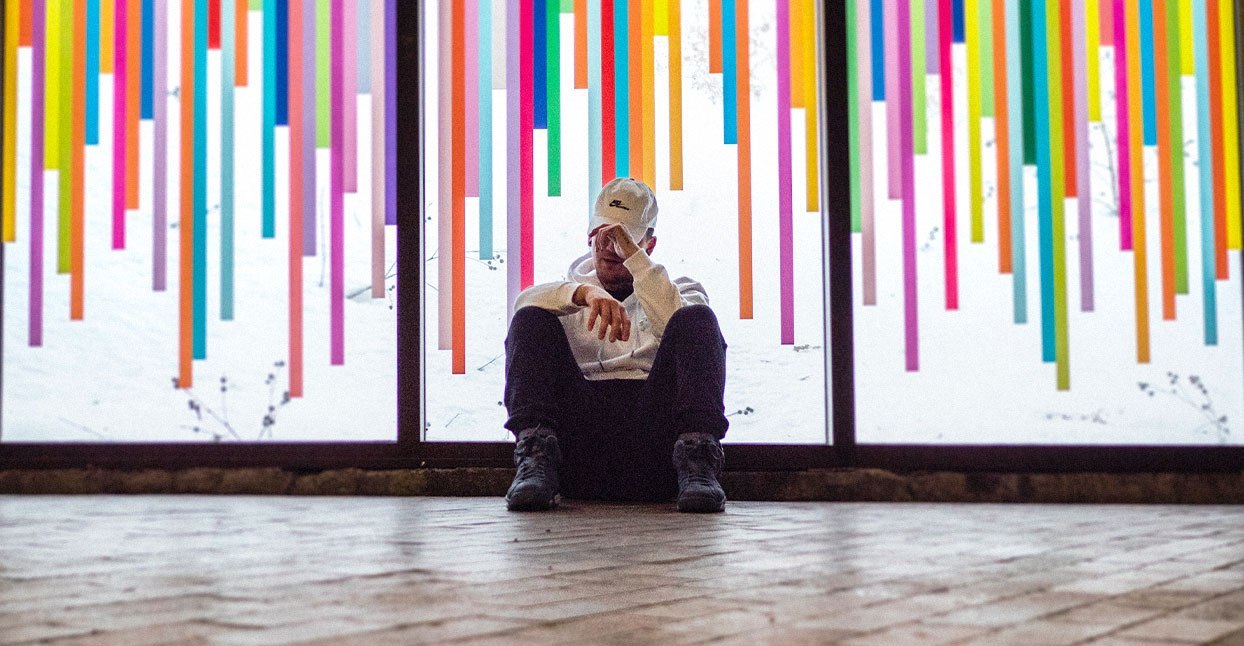 Iqaluit, Canada rapper FxckMr—pronounced ‘fuck mister’—was born MisterLee Cloutier-Ellsworth; both of his names tell a story of family, community, and love. He was named for both his late Aunt Missy, who died by suicide before he was born, and his cousin Lee, who was born on the same day. For Inuit, giving a newborn the name of a relative who has died is a way of symbolizing the idea that the deceased is now living on in the person who bears their name. “My parents wanted her energy back,” says Cloutier-Ellsworth. “When they named me Mister, my dad’s family was so excited, especially my grandmother and all my dad’s siblings. With Missy, there’s times where I feel I want to live for her.”

Cloutier-Ellsworth is doing just that. The 21-year-old rapper is credited with helping to build Iqaluit’s fast-growing rap community. He started rapping with friends five years ago, and just released his first album, 1997. The record is visceral and macabre, with occasional moments of celebration throughout. Production is layered with bass-heavy trap beats that provide fitting textural groundwork for Cloutier-Ellsworth’s vocal tracks. Taken in full, 1997 explores the intersection of anxiety, depression, drug use, and mortality.

Opener “AM” sets the mood, with Cloutier-Ellsworth saying “Good morning, woo!” over a haunted, tinny music-box melody. On “PMFWAFT,” Cloutier-Ellsworth hypes himself up, crowning himself the “pretty motherfucker with a face tat” on the chorus. “Higher” is a frantic back-and-forth dialogue that oscillates between depression and nihilistic rage. On closer “Hunnid Grand,” he envisions his death, imagining how he might be remembered: “There once was a man with a master plan/Who always had a smoke in his hand,” he groans in a raspy drawl.

For Cloutier-Ellsworth, like many living in Nunavut, the scenario wasn’t hard to imagine. The suicide rate in Nunavut, while declining over the past few years, is still nine times the national average in Canada. “I’ve debated it a lot,” says Cloutier-Ellsworth carefully. “It’s something that goes through my mind where I’m like, ‘Holy fuck, everything is just way too much.’” He says if he’s in crisis, his community steps in: “I have really good people who really give a fuck about me.”

It was those people who helped Cloutier-Ellsworth through the traumas over the last two years that informed 1997. “We were doing a lot of fucking drugs,” he says. “I didn’t know where my head was at. I had quite a few really heavy mental breakdowns in front of some friends last summer. After that point, that’s when I started piecing together the album.” Now, he maintains regular conversations with friends about their collective well-being, texting them every day.

This support is critical, especially in the face of a dire lack of culturally-adequate mental health services in Nunavut. “I personally haven’t gotten into therapy or counseling, but I’ve heard it can take months,” says Cloutier-Ellsworth. Even then, mental health professionals in the territory are often from southern Canada, and fail to address the nuanced and intersecting traumas facing communities in Nunavut, like generational and colonial trauma. As Cloutier-Ellsworth explains, “It’s people who have their degree, but they’re not from the north, so they just don’t know the issues or how to go about tackling them.”

In the absence of appropriate infrastructure—a damning commonality among the Canadian government’s treatment of Indigenous nations and communities—community solidarity and organizing can help folks cultivate feelings of hope. Cloutier-Ellsworth’s work resonates with his peers in Iqaluit on multiple levels because it’s both about the practice and celebration of his craft, but also about the topics to which he applies it. “Especially for people my age, it feels good for things that we talk about to be brought to life, or brought to a bigger audience,” he says.

At a packed-out summer show at the Iqaluit Legion earlier this year, a number of his friends decided to try performing, too. Now, they all work on tracks together, writing, producing, and recording in their small hometown. This, for Cloutier-Ellsworth, is what’s most important, and he describes it simply with a grin: “It’s just hanging out with people who are trying to do the same thing as you.”