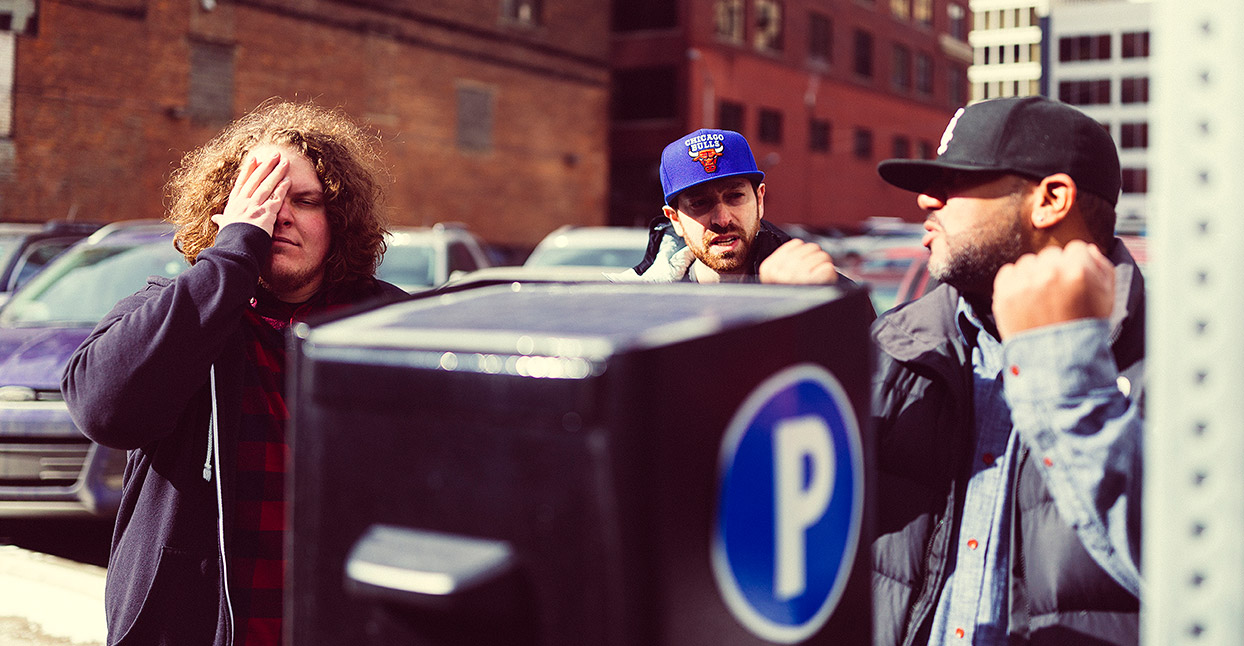 “We don’t have an agenda. Our branding is the fact that we’re quality people who give a shit about our environments. We’re responsible, decent folks.”

At its best, hip-hop is a voice for the voiceless. It’s not about the wealth you’ve acquired, or the amount of liquor you consumed at the club. It’s an expression of real concerns, and the best rappers expose personal struggles as a way to help listeners cope with their own stress. Over the past three years, that’s what MCs Verbal Kent and Red Pill have done in their work with producer Apollo Brown as Ugly Heroes. They create grassroots rap that speaks to everyday people on the grind—those living check to check, working several jobs to keep food on the table.

The group feels more cohesive since their 2013 LP and their self-titled EP a year later. Its members still celebrate the hustle, but unlike their previous work, the forthcoming Everything in Between also places value on the little things that make life so grand. “I think the vibe is a bit more introspective,” Red Pill tells Bandcamp. “I think it’s more about family. It’s more about appreciating what you have versus being upset at what you don’t, and knowing that the people around us are the ones who make us whole.”

Ahead of the album’s release, we spoke with Red Pill and Verbal Kent about its creation, why they live the reality they rap about, and presidential candidate Donald Trump. Because, of course.

The new album really reminds me of ‘90s hip-hop. Did you do that on purpose?

Red Pill: When Apollo Brown hit Verbal and me up in 2012 to do the first album, we really wanted it to be about the common working-class person. That demographic—especially coming from Michigan and Chicago—happens to be people who are janitors, garbagemen, factory workers—anybody who makes the world go ‘round. I come from a working-class family. That ethos, that blue-collar working mentality, has certainly pushed into our music. We’re trying to tell the working man’s version of the world through the ethos of 1990s hip-hop—that gritty, ‘of the people’ music. That’s our purpose, for sure.

Verbal Kent: It’s been two years since the first album. With Everything in Between, we’re more of a unit. We’re more cohesive. We understand each other more, and we’ve grown.

I think it’s resonating with people, because it’s really just about life. There isn’t any part of this album where we’re claiming to be anything that we’re not. This may not be something that gets the attention it deserves, but I think one day it will. I think that’s what’s cool about rap music—the time in which a particular album is relevant doesn’t necessarily have to be the time it was made. I think we speak for a lot of people who are very frustrated with society. Whether or not people will appreciate that, or dive into what we’re doing right now is yet to be seen. But I think we’re all comfortable with whatever happens.

What personal challenges did you face in the time between the last record and this one, and how is it reflected in the music?

RP: I think I’ve grown a lot. I was like 23, 24 on the first record. I worked 50 or 60 hours a week in a plant in Detroit. Once the record came out, it got to a point where I was able to quit that job. I still work a part-time job now, but it’s not nearly as grueling and taxing on my life.

Now I’m 28. I’m watching my friends get married. I’m watching my friends buy houses, have kids. And I’m still a 28-year-old rapper trying to make it. You really have these moments where you wonder, ‘Is this what I’m supposed to be doing? Should I focus on something more concrete, like sitting at a desk with job security?’ I hope on this record we’re coming across as confident. I’m trying to find a balance right now. I think that should show through.

VK: If you listen to my role on the first album, it was about reflection—lessons and struggle moments in my life. I was telling the story of how I became who I am.

With this album, I come into the present a little bit more, and talk about what I’ve learned as a man. I talk more about fatherhood, about my connection with my son, about my appreciation for being alive, about all the things I went through and how they’ve made me who I am now. In a way, [Red Pill] and I sort of changed roles. He’s looking to the future on this record, but we still stayed true to who we were.

How is your personal upbringing reflected in the music?

RP: This [album] is for anyone who, at any point, had to worry about whether their electricity was gonna be out, for those who had to warm up water on the stove to take showers and baths, or had to go to school with clothes that weren’t clean. I think when you’re going through it when you’re younger, you resent it. I remember times being out with my family and wondering, ‘Why can’t I afford this? Why do I have to come home to no electricity?’ Shit like that. But as you get older, you realize how much character that puts in you, and how much that makes you respect and empathize with other people’s experiences. That’s the kind of thing I put into my lyrics.

VK: The music that Apollo gave us really brought a lot out of me. It made me very comfortable sharing a lot about myself in a way I haven’t really done before, even on my solo projects. When I first heard the record, I was really emotional about it. I feel really lucky to have experiences like that with my own music. I really gave everything I could. I’m a 37-year-old man, and I’m still learning how to express myself to the fullest. That’s great. It makes me feel like I’ve only just started my career as a writer.

How has your creative approach helped you stand out?

RP: You stand out by just telling your personal story. For Ugly Heroes and what we do, we’re trying to show the middle of the road. Not everyone is in dire straits, and not everyone is rich and wealthy—it’s not Drake and Jay Z talking about how much money they have. The thing that’s unique, I hope, is that we’re giving the middle-of-the-road perspective of what people go through in this country and throughout the world. There’s a lot of us who are right in the middle of all that. You might not always have a bunch of money, but you can find ways to make your way through life. We fit right in the middle of that: We’re not just starving artists, we’re middle-class artists.

VK: We don’t have an agenda. Our branding is the fact that we’re quality people who give a shit about our environments. We’re responsible, decent folks. So if you buy into our whole brand, it probably means we’re relatable to you because you are the same. That’s why I think there’s a really genuine connection with our fanbase. I think that’s the magic of it all, and why I hope this album can pick up to a point where people start acknowledging and diving in a little bit. You can find yourself in our music.

How much did the state of the world influence this album?

VK: So much. Red Pill is very much into politics and so am I. We’re very much into justice and anti-racism at every level. We had more of an opportunity to talk about those things. When the first album came out, it’s not like there weren’t racists, but it was a different time. Immigration was more of the mainstream focal point three years ago. Now, you’re seeing horrible things happening. There’s this undertone of fear, despair and terror from within. What Donald Trump represents—to every regular-thinking, normal human being, he’s basically all of your worst nightmares in one. And the only ones who support the guy are racists. I can genuinely say that anyone who supports Donald Trump is basically off their mark. They live in a bubble and don’t get it.

RP: I feel it’s our artistic obligation to reflect what’s going on in the world. I feel like music should be a little bit pathological—where it tells people what’s going on. You have to reflect the times and what you’re going through. I know Nina Simone was big on that. I know the Beatles were big on that. Right now, we’re living in crazy times: this Donald Trump shit, race relations have been clearly strained with police brutality.

Being a white dude in hip-hop, I feel an extra level of obligation to make sure I’m reflecting that. There are a lot of white rappers who seem to have none of that obligation. Coming into music that is black culture, that has come from the people, and basically separating themselves from that—like, as a white rapper, making white rap music for white fans exclusively. It’s like they can totally exist outside of the culture without having any ties to it. For me, what’s going on now is super important to put into my music. Growing up on hip-hop, it’s important to me.

What do you want people to take away from this album?

RP: When you’re going through something, it’s not always easy to remember what you have. It’s a difficult thing to be able to step back and say, ‘I have a drinking issue,’ or, ‘I’ve been working my ass off and no one’s paying attention to me.’ A lot of this stuff is pretty unimportant at the end of the day. The things that are important are the people that you love, the people that you care about and how you’re bettering each other’s lives. As bad as things seem, there’s always a light at the end of the tunnel. Just don’t take things for granted I guess, because I do it all the time. I have a beautiful girlfriend, I have brothers who I love, a father who I love, friends who I love, and a decent little music career that I definitely take for granted every day. I have to remember that things are probably gonna work themselves out. I hope. That’s always been my goal with music—to tell the shitty parts of it, but have a little glimmer of hope at the end of it.

VK: We speak what we see, what we feel, who we are and where we wanna go. It’s not a gimmick. It’s not a get-rich-quick scheme. We’re looking to get respect, to find people in the world who connect with us. My hope is, when you hear Everything in Between, you can use it in a really positive way to get you through things. That’s what it’s all about. Music got me through so much in my life. So if I can do that for you, then all my hard work really paid off.