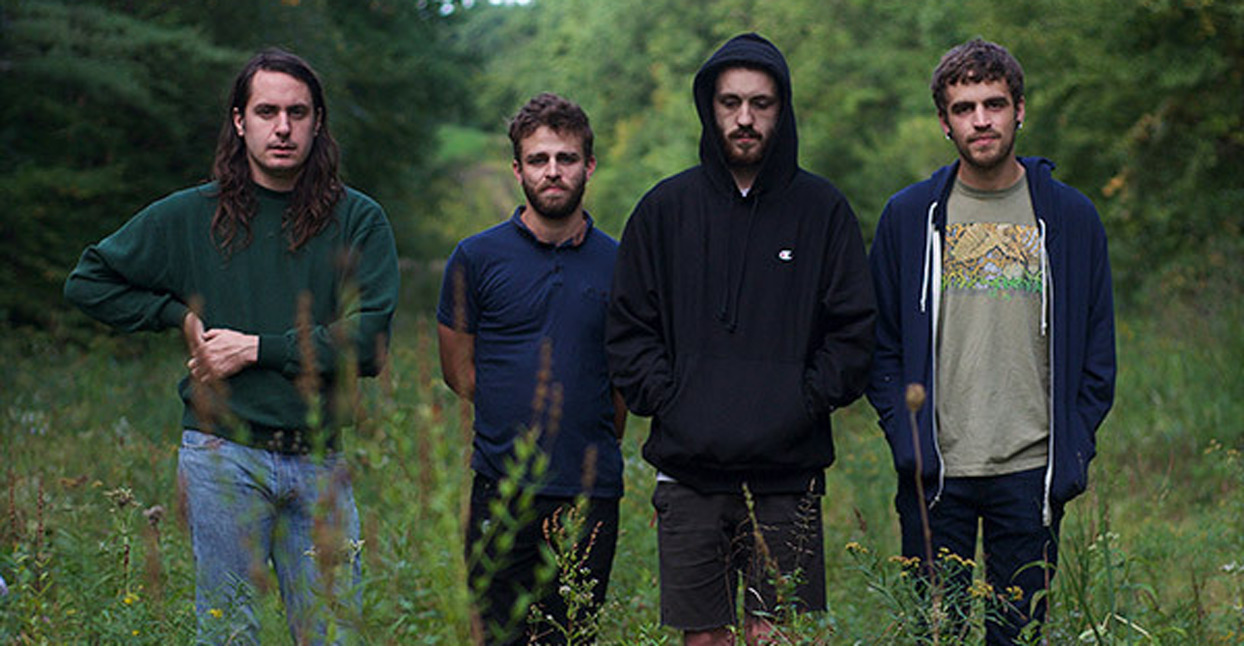 “I feel like an adult because so much of what I do and say, I am 100% responsible for. It can’t be explained away by, ‘Oh, he’s at this point in his life, and he doesn’t have it figured out yet.’”—Christian Holden

It’s not uncommon for great bands to be weighed down by ill-fitting genre tags. So when Christian Holden of The Hotelier self-applied the “emo” tag with a ‘shruggie’ back in 2014, he likely did so just to get it out of the way—a self-deprecating joke to clear the air and, more importantly, push the conversation forward.

Which is exactly what The Hotelier has been doing ever since they began in 2009. The pop-punk guitars and riled-up drumming on their first EP, We Are All Alone, soon expanded into the layered, sometimes theatrical music that has distinguished each subsequent release.

As the group’s primary lyricist and songwriter, Holden is a storyteller. His earliest songs were full of young voices insisting on their own agency, acknowledging and rejecting hypocrisy. The lyrics were sharp, and the indignation was righteous, loud, and accusatory. The band hasn’t softened with age, but their viewpoint is less binary. The shades of gray have never been more pronounced than on their latest release, Goodness.

Building on the more nuanced songwriting of 2014’s Home, Like Noplace Is There, Goodness is preoccupied with thoughts of travel—finding private places in the American wild to be alone with your thoughts. The guitars are angry, but the lyrics are often intimate, seeking out the sacred in the commonplace. Holden has described Goodness as a “love record,” but the songs take a metaphorical approach to the term. A piano is regarded as “88 remembered loves”; he refers to both himself and the sun as “twin-firing machines, spending all our energy.”

The inclusion of a new recording of “Settle The Scar,” from 2013, recontextualizes the song, slotting it in comfortably alongside Goodness’s new revelations. It fits in beautifully, and speaks to the group’s holistic approach to their career. This isn’t a band dead-set on burying the old. Instead, they acknowledge the experiences that informed all of their work, while keeping their eyes firmly fixed on the future.

We spoke with Holden about challenging expectations, feeling like an adult, and the concept behind the cover of Goodness.

There’s a lot of travel on the new record. I was wondering, do you read a lot when you’re on the road?

Leading up to the writing on this record, I was reading a bunch of Mary Oliver, Wendell Berry, a little bit of Emily Dickinson. I haven’t read a lot in my life—I think school turned me off to it. Poetry was an easy venture for me, because I could invest less time into a piece—just sort of sit down, read it, and be done. Poetry was a way for me to learn to read again, and those were some of the people I was reading when writing this record.

You’ve spoken about other bands a lot in interviews. You’ve also grown up alongside a lot of bands, and you’ve toured with them. I was wondering if your creative process takes into account your musical peers, or whether you try to isolate yourself from the people around you during the songwriting process.

I think it’s impossible to fully remove myself, but I think that the effort is there. Making music in any style, especially as an artist who is sort of classified within a genre, you’re always making music that’s responding to something. Or, you’re making music that’s responding to how other people in your world are doing something, and maybe challenging that. So, in that way, I feel like the music that I’m making aspires to challenge what’s being done in the genre. Not necessarily revolutionize it or anything, but slightly jab at it and challenge it.

It always is. It doesn’t matter what style of music you’re making, there’s an element of reaction to it. But when I’m writing, I have to think that I am an individual, with my own individual experience and my own skill set that’s different from other artists. It would be doing a disservice to look at how other people do their work and to try and do it in the same way—to look for a norm in other artists that doesn’t work with my skill-set or my particular flavor.

When we were writing Home, and I was writing lyrics for it, I was like, ‘Nope, I’m not going to listen to any music at all.’ I listened to no pop, rock, or anything. I only listened to the record [I was working on] until it was done, just so I could focus solely on that. Especially when we had less validation as a band.

When you’re a band with little validation, you’re going to look at how other people are doing things in order to achieve that validation. I think that’s how I felt early on. Now, I feel differently, and feel like I have adequately been validated as an artist, so I’m not so intimidated by other artists.

You’ve said before that Goodness is a love record, which I interpreted after listening to it as a love for nature and for life. Is there a part of this record that’s also a love directed toward the end of life—at death, or similar concepts?

I think Home is a record that recognizes that internal chaos is a thing that’s always there and that has to be there. That was a re-learning record. It was a response to [2011’s] It Never Goes Out, which was a twisted record that had a certainty about the way life works. Home exists in the uncertainty and negation of those thoughts.

Can you speak about your choice for the cover of Goodness?

I wanted something that would evoke newness, rebirth—a sort of mysticism, without it being too plain or too caught up in imagery of what is generally seen as ‘pure’: young bodies. I think that older bodies are generally not seen in the same way. The idea was to evoke the natural—the notion of rebirth, without evoking eroticism or purity or glamor.

You once wrote, ‘Fuck yes to art critiquing in the scene.’ I think it shows responsibility for a band to drop that kind of analysis. You’ve said before that you appreciate criticism, both good and bad. A lot of people yell at critics—the response to Batman v Superman is a fairly recent example—and in music, a negative review could potentially translate into fewer sales. Do you believe that thinking critically is crucial to rock music?

I think so, yes. I think how music critics can flex authority, and how power works in regards to who gets to speak with an authority on a piece, can be a problem. With Batman v Superman, a couple of sources flexed their authority on film to bash a movie. But also, looking at art as a non-spectator sport is important.

What have you found to be the most profound bit of criticism that you’ve heard in regards to the band?

Some people saw the song “Housebroken” as unhelpful or unproductive to survivors of abuse. This made me think about my own songwriting, and how growing lazy in writing can cause—especially given the sort of trust someone might have in a band—dissonance in meaning. That made me think about my responsibility as a songwriter with specific topics. That was among the more relevant critiques that I’ve ever heard about our band.

Possibly a strange question, but: do you feel like you’re an adult?

Sort of! [laughs] Sometimes I’m put in situations where I’m responsible for youth, and that, in a way, makes me feel more like an adult. I think that people make it out to be like there’s a dichotomy between being an adult and having the spirit of a child, and I don’t think that’s exactly true.

Sometimes I’m an adult. Being an adult is a role you occupy, and sometimes I am occupying that role.

When we were booking our Australian tour, we decided that we’d take any of the money we made on it and use it to go to Hawaii [laughs]. When we were in Hawaii, sitting on the beach on this trip that we paid for ourselves, we were thinking, ‘Man, this is pretty grown up!’ But we were also renting scooters and riding around so…maybe ‘adult’ is a role that I sometimes occupy. And I don’t have any children, so I don’t have to be a full-time adult.

BC: You’ve mentioned that sometimes you’re put into a position where you’re responsible for youth. Did you mean that in relation to your work as a camp counselor, or in relation to doing a show? Is there a difference?

I feel like an adult because so much of what I do and say, I am 100% responsible for. It can’t be explained away by, ‘Oh, he’s at this point in his life, and he doesn’t have it figured out yet.’ I think that I am a person wholly responsible for how I carry myself, and how I present myself and the effects that I have on the world.

So let me take it all back: I feel like I am a full-time adult in that respect, in how that relates to younger people who are ‘trial-and-error-ing’ life. I feel more responsible in that way now.