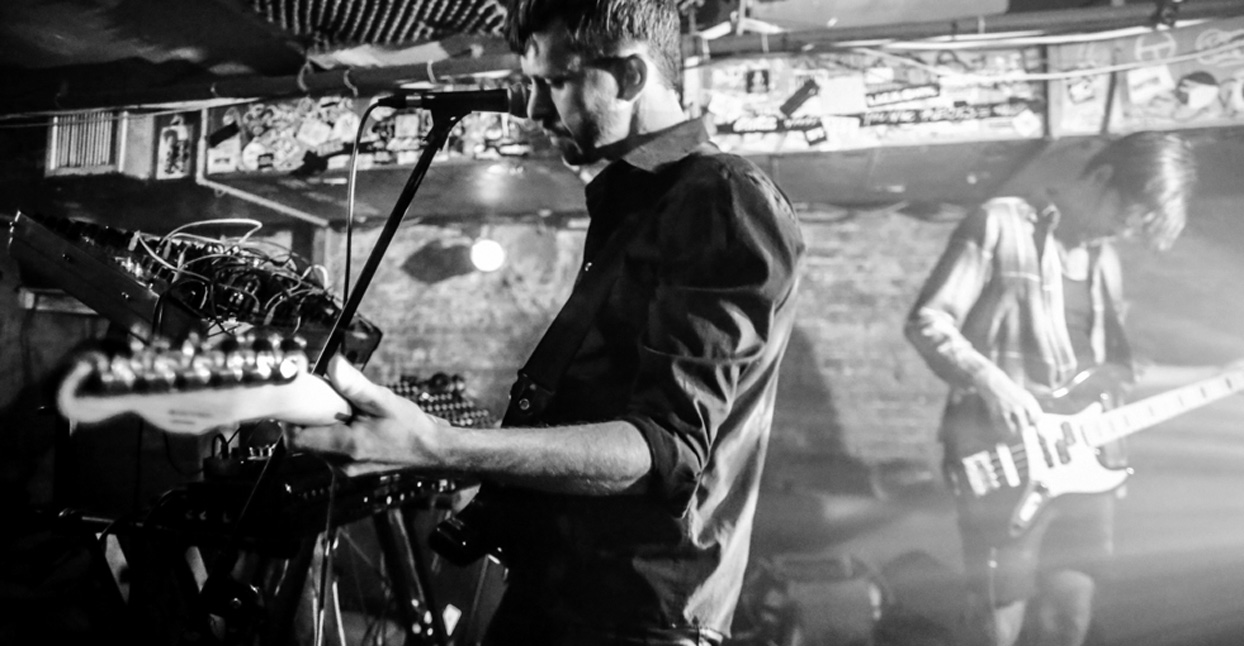 Charles Noel and Todd Sines have been releasing music together for 26 years, but they still inspire one another to push both their boundaries and their abilities. They’ve recorded for world-class electronic music labels like Ghostly International, Planet E, and Peacefrog, but they reserved their most personal project for the launch of their own label, HELIC.AL.

The notes for the forthcoming Transmit (for which Noel and Sines have adopted the moniker Interval , and added friend Andries Boekelman on bass ) explain that the project is, “what happens when you take experienced electronic music producers who wear their broken hearts on their sleeves and get them back to their formative roots.” Listeners will hear an affinity with the experimental-yet-accessible sounds that emerged in the ‘80s, when the heavy beats and basslines of industrial and electronic music collided with tense post-punk.

That’s not accidental. Sines first met Noel at a Revolting Cocks show in Cleveland back in 1990, and the two started working together the next year after running into one another again in Columbus. “It was an Industrial Missed Connection,” remembers Sines. “He had dreads, a leather jacket & Misfits t-shirt — like an African-American predator punk.”

The music they listened to when they first met has seeped into the songs they’re making now—both melodically and politically. And given that the global climate that surrounded the early days of early industrial music seems to be making an unwelcome comeback, Interval’s self-described “post-punk experimental shoegaze goth beat-driven mechanical dirges of love and lust” feels as urgent as ever.

Getting back to their roots for Transmit meant putting their laptops to sleep in order to get creative with Sines’ vintage analog gear—tape machines, effects units, and towering consoles. They recorded to 8-track tape, and mastered direct to lacquer. It was a refreshing break from their day jobs; Sines is a film and art director for his company, while Noel is an interactive producer at an ad agency by day and teaches music production at the SAE Institute in New York City at night. For inspiration, they looked to classic works they admired, as well as the studio techniques of some of the greats.

“We’re stuck in this doorway of a time portal between the future and the past,” explains Sines. “We’ve acquired some of the same equipment that was used to make some of our favorite records. I have an old Marshall Time Modulator that used to belong to Roger Waters and was used by Tones on Tail and Bauhaus; we use the same MCI JH618 mixing console Kraftwerk used on Computer World, and the same AMS delays and reverbs that Martin Hannett used on Joy Division’s work. We also use the Korg KR-55 drum machine that was featured on Depeche Mode’s Speak & Spell and countless Cabaret Voltaire tracks. But we can’t replicate the climate, the air, or even the molecular structure of the past. Despite having all those elements, the music we make ends up being a distorted refraction of the current world.”

Noel agrees. “We have a geeky fascination with the past, I suppose,” he says. “We are currently going for a somewhat retro feel, but at the same time we’re looking forward. The analog gear is helping us bring that. It’s also been allowing us to move into personally uncharted territory, changing up the process and, therefore, the music. We’ve come full cycle with the gear.”

Noel credits a shared connection to music that has kept their friendship and working partnership solid and successful.

“We are true music heads,” he says. “We are both so passionate about it that decades of change, relationship dramas, technology shifts, and economic obstacles haven’t killed our desire to create and move forward. We got some brotherly love going on, we’ve been through a lot together in life and in our creative aspirations. We’ve got so many in-jokes that it’s basically a lingo of its own.”

Interval’s use of older gear and techniques is a positive example of how to learn from the past without reliving it—which itself is something of a metaphor for our turbulent political times.

“In 2013, Kristjan Zaklynsky, tipped me to Second Layer [Records], which had a strong anti-war sentiment,” Sines says. “Their discography had become my running, biking, road trip—my  everything soundtrack. It echoed my frustrations watching Russia pummel Ukraine and annex Crimea, and resenting my own appearance on Russia Today television in 2008. The political climate inspired me to get involved with Bernie’s presidential bid, but we hadn’t bargained for the bigoted, tyrannical juggernaut Trump. The pendulum swings back after eight years, and we’re condemned to repeat our past . ”

“Doomed to repeat, right!” Noel agrees. “Looking back with a more cultured and experienced eye, you can see why certain cultural things bubbled up in the ’80s. It seems fitting for that aesthetic to return.”