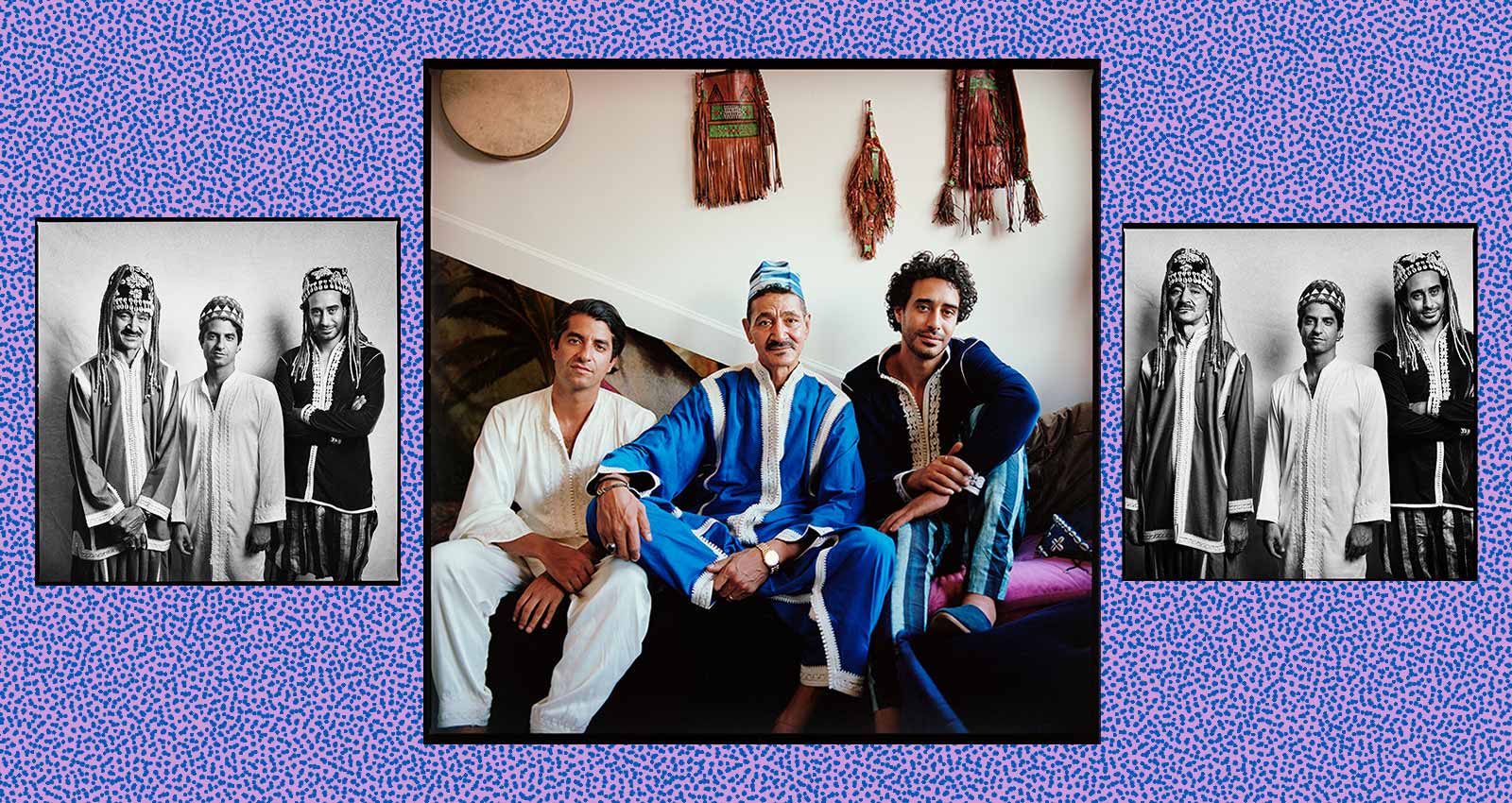 Lila, the name of Innov Gnawa’s new album, and first for Daptone Records, is a reference to sacred night ceremonies in Morocco dedicated to spiritual healing. “Everybody has spirits within them that are coexisting and co-inhabiting, says Amino Belyamani, a member of Innov Gnawa and a Moroccan expat living in New York City. “The way we negotiate these spirits is by hosting lilas.”

At a lila, the driving, repetitive sound of Gnawa music powers the ceremony’s spiritual ethos. The music functions as a way to hypnotize its audience, and to help navigate a cleansing experience. A Maâlem (or “master”) guides the lila through a series of centuries-old songs that represent seven distinct colors. If the colors are not played in the correct order, it can disrupt the healing process, hence the importance of the Maâlem, who commit to a lifelong dedication to their craft. “Sometimes the spirit inside us humans just needs some attention,” says Samir Langus, another Moroccan musician based in New York City, and one of the founding members of Innov Gnawa. “When you have a toothache, you go to the dentist, right? It’s the same with the lila—you go to a ceremony to help your spirit.”

Gnawa music consists of three main instruments: guembri, krakebs, and voice. The guembri (a three-stringed bass guitar made out of camel skin and cow gut) is the focal point. It provides the driving lower-end of the sound and grounds the meter of each song. The krakebs (iron castanets) fill out the top-end with a repetitive pattern—akin to a gallop—creating a rhythmic counterpoint to the guembri. Finally, antiphonal voices occupy the middle layer, interacting with one another in call and response.

Innov Gnawa’s artistic director and lead singer, Maâlem Hassan Ben Jaafer, is one of the few musicians living in the United States who is trusted to host a lila. He has a rich, soaring tenor voice, which brings a unique gravitas to the New York group’s sound. In order to become a Maâlem, a person’s ancestral heritage must derive from the Gnawa tradition in Morocco. Ben Jaafer is from Fes in the northeast, where his father, the late Abdullah Ben Jaafer, led a zaouia—a school—devoted to Gnawa. It was here where Hassan Ben Jaafer learned his craft and gained his independence. “That welcoming environment where doors were always open was and still is my inspiration in life,” he says of his experience. “If you travel, you will be welcomed by the masters you visit, if you stay home, they will come visit you.”

Ben Jaafer decided to travel, arriving in New York City in 1999. A little over 10 years later, after working day jobs in a bodega, a cafe, and a furniture store, he formed Innov Gnawa alongside Belyamani, Langus, and others, playing shows at Zebulon, Nublu, Barbes, and other intimate venues across the city. Ben Jaafer is one of a handful of Maâlems who carries the tradition of Gnawa music outside its native land. “Gnawa is first and foremost about the community. It is about generosity, hospitality, respect, and dignity,” he says via email, translated from Arabic.

As the spiritual elder of the band, Ben Jaafer knows the entire Gnawa music and dance repertoire—thought to be hundreds, if not thousands, of songs—all committed to memory. He also knows how to craft a guembri from scratch, and hammer krakebs from raw metal, which are other prerequisites to becoming a Maâlem. Over the years, he has graciously passed along the knowledge he learned from his forefathers to the other members of his New York collective.

“When we hear Maâlem singing something new, we pay attention,” says Belyamani (who is also a member of the highly-regarded trio Dawn of Midi). “He sings the call and response just two or three times, then we are on our own. If you are fast enough, you get it. We learn on the spot using our ears. There isn’t any sheet music. We’ve learnt hundreds of songs that way.”

By passing along ancient, ritualistic songs to a new generation of musicians in New York, Ben Jaafer presents traditional music, stories, and dance in a forward-thinking, innovative way. Where previously, Gnawa was mostly confined to private settings across Morocco, Ben Jaafer and Innov Gnawa have toured across the U.S., featured in countless collaborations, been nominated for a Grammy, and are now signed to a label specializing in American soul music. “We are taking the music outside of its sacred context but we are keeping the good parts—the trancing and the healing,” says Belyamani.

“Ninety percent of the audience at shows are non-Arabic speakers,” adds Langus. “But they are still in trance with the music. There is a real connection between the audience and the musicians. The audience is curious and they are focused. The Gnawa has this power of making people be quiet. It makes you respect it, be quiet, and listen. It is holy music.”

“Music is the spirit,” adds Maâlem.