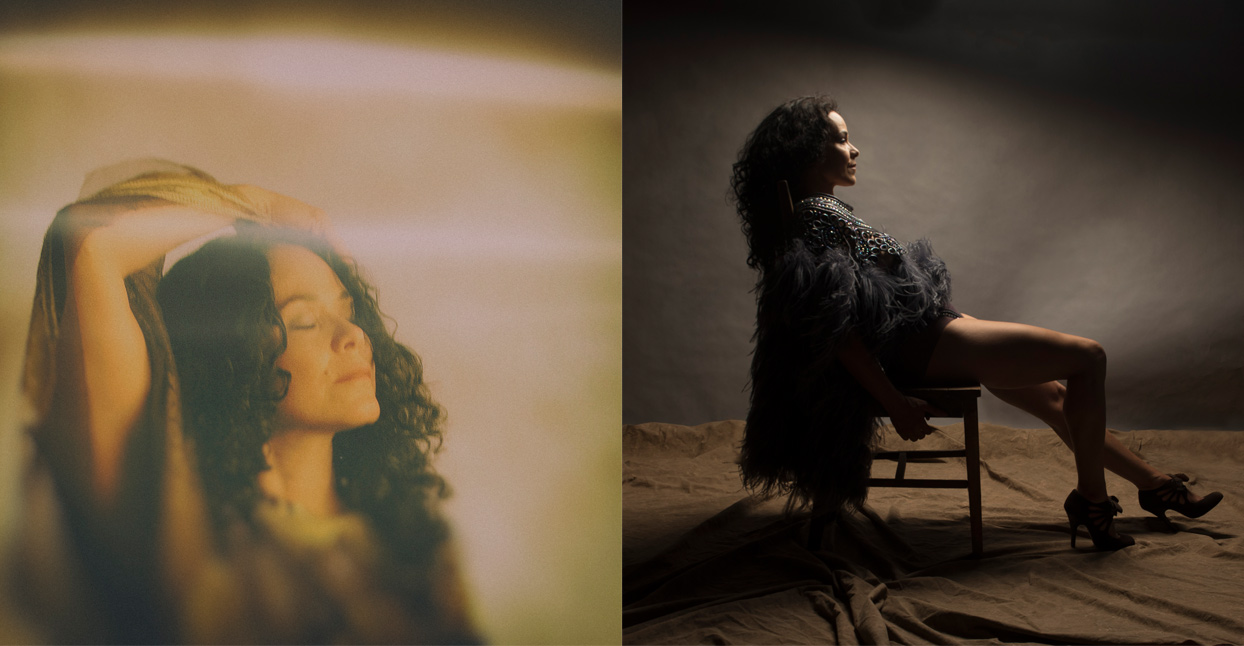 When asked to consider the largely unpredictable trajectory of her career, poet, songwriter, and visual artist Ingrid Chavez is quick to point out the most important common thread in all of her work. “I’ve always just done whatever I felt like doing,” she explains. “But I have noticed that it generally takes me three to four years to make something new. That’s just because I’m living my life, and I’m writing as I go. I’m not just trying to churn out songs, I’m only trying to find things that are meaningful to me.” Meaning, as it exists in Chavez’s work, takes on many forms—from pure spoken-word poetry to sultry, Badu-esque jazz-inflected trip hop to breathy electronica, her work spans a variety of genres and an even wider spectrum of collaborators, many of whom make appearances on her forthcoming solo record, Memories of Flying.

Written in fits and starts over the past four years, Flying features collaborations with musicians and producers from all over the world, including Charles Webster (U.K.), Mashti (Denmark) and Hush Forever (Sweden). For Chavez, who has a long and varied history collaborating with the likes of David Sylvian, Ryuichi Sakamoto, and—most famously—Prince, such long-distance partnerships felt very natural. “I’ve written songs with these people for their projects, or they’ve remixed some of my things,” she says. “There’s already a bit of a working relationship there. And there’s a mutual respect. They might send me three or four pieces, and I’ll choose one or two that I throw into the car, and I just start driving. That’s how I like to write. If, in that experience of driving, some kind of melody comes, or a lyric idea comes, then I’ll just kind of chase that further.”

“You’re just vibing on the world,” she muses. “You’re just kind of cruising, and you’re taking in what’s around you — whether it’s through the city, or through the back roads of New Hampshire, where I live. It somehow frees the mind up to let it just kind of naturally go with the melody of the music. It’s just like a natural experience for me.”

One such organic path—a tearful two-hour drive through the back roads of New England—led to the creation of the album’s emotional centerpiece, “You Gave Me Wings:” a musical ode to Prince, Chavez’s longtime friend and mentor. The two met in 1987, and quickly established a relationship that would have a profound effect on both of their careers. (She would later play the part of Prince’s romantic interest in his 1990 film Graffiti Bridge.)

“I was young, and I felt like the world was like mine for the taking,” she recalls. “When we met, he was just like, ‘Who are you? What do you do?’ We started hanging out a lot and we were both very inspired by each other. It turned both of our lives around. At the time, he was struggling with the release of The Black Album. The night that we met he had some kind of epiphany, and then he decided that it was the wrong direction for him to go creatively, that he didn’t really want to put that message out into the world. He immediately started working on Lovesexy. The first thing that I wrote in that very first session with him was “Cross the Line,” which happened to be the piece that he used in the intermission of the Lovesexy tour.”

For Chavez, the collaboration with Prince would help set in place a kind of musical vernacular that would influence her creative output for the next thirty years—a kind of sonorous, poetic sing-speak. Recorded over one long session at Paisley Park, Chavez’s first official solo release, May 19, 1992, is a spoken-word recording of her poetry with musical accompaniment by Prince on keyboard. “We recorded 21 pieces that way,” recalls Chavez, “That initial recording of me is exactly what you hear on that record. We didn’t go back and re-record anything. We captured something real. We captured a creative moment between two people. And that’s what I think makes it unique.”

Though she would go on to play and collaborate in in a variety of different projects over the next three decades, Chavez is the first to admit that her experiences in the music industry—particularly in dealing with major labels—were often crushing. Not only did the labels not know what to make of her voice or her unique poeticism, in 1992 she undertook a painful legal battle to secure her co-writing credit on “Justify My Love,” a track  made famous—and infamous—by Madonna.

“It wasn’t written for her,” says Chavez, “So it was a bit like somebody stole one of your children, like it was kidnapped. Actually going through that experience just turned me off to music. I just disappeared from it for about 12 years. I was like yeah, ‘This is not even nice, it doesn’t feel good.’ I had to step back.”

Chavez would, of course, step back into music eventually, through a series of collaborations, band projects (Ovo, Black Eskimo), and in 2010 she released her second proper solo record, A Flutter and Some Words. For an artist who still believes in the power of the full-length album, the forthcoming Memories of Flying is an 11-track missive on positivity and creativity: “It’s just a reminder that, even though maybe you feel grounded right now, or you feel like you’re not able to be as creative or as free in your life as you have been in the past, it’s still possible to elevate yourself again. Life is full of ups and downs, and there are times when you just need to stop and reassess. And there are times when you just need to soar. You need to fly.”

At a time when so many attitudes about the state of the music business veer towards abject doom, hearing Chavez—a person who has experienced firsthand the peaks and valleys of the industry—speak about what it means to be an independent artist in 2019 is both refreshing and heartening. “Yes, you don’t make much money, and you have to work harder to make money as an artist now,” she says. “But you don’t have anybody telling you what to do, and that feels so much better. I’m much more comfortable in this period of my life. And I guess that’s why I feel so creatively alive, because it’s on my terms. I release music how I want to release it, and I can take as much time on it as I want. And am I rich off of it? No. But am I satisfied in the experience of it now? Yes.”