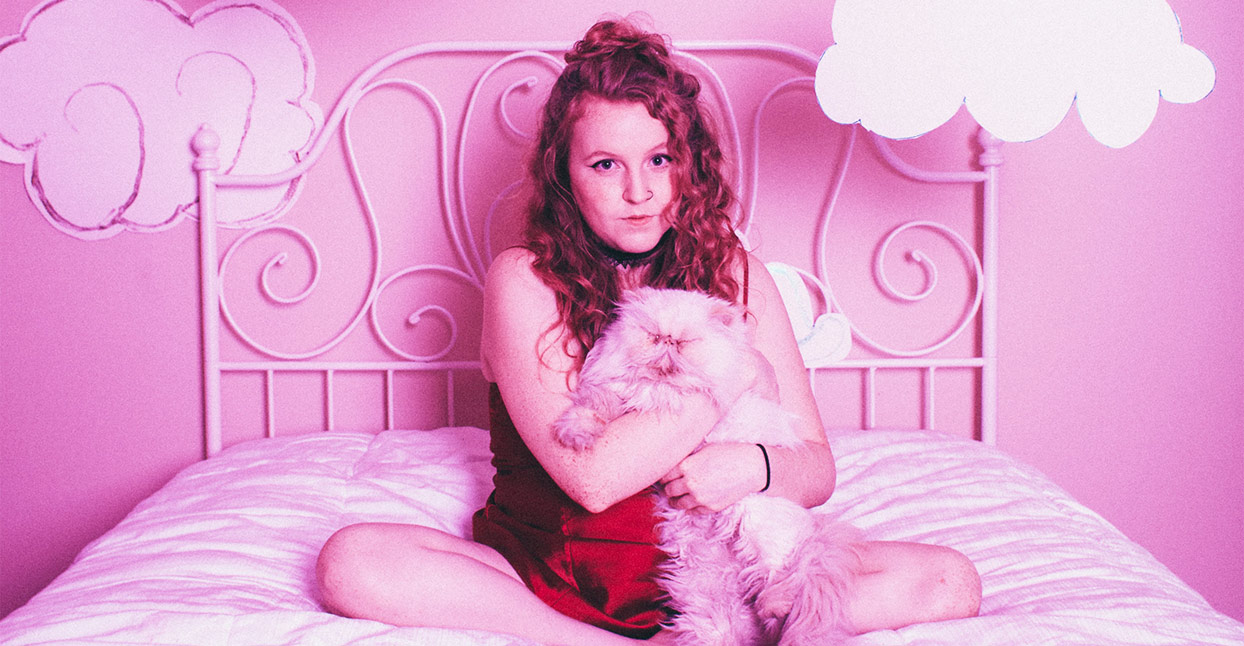 Caroline White’s second LP as Infinity Crush, Warmth Equation, is an album that’s focused on future—specifically, the uncertainty of the future. Written in the years following her father’s sudden death, the album chronicles White’s sorrow and confusion through gorgeously layered dream-pop, managing an intimacy that’s simultaneously comforting and unsettling. In just 28 minutes, White offers a glimpse into the ways she’s processed the turmoil of the past few years. The album is best understood as a series of vignettes: the moment where she asks a close friend to get sober, another where she reimagines her goodbyes, and, at the very center, a feminist attempt to learn how to live again.

When we spoke with White, she shared her belief that society dictates the ways women respond to loss: They’re supposed to shut down entirely. They don’t fuck, they live alone, they wear black all the time. Determined to contradict that narrative, White’s stories of how it feels to date and have sex again are central to Warmth Equation. They’re the first few steps she takes in order to piece herself back together—not necessarily to move on, but to regain sanity, and to realize it’s still possible to love after loss. In one particularly powerful moment in the song “Flightless,” White whisper-sings: “You look so pretty/Going down on me/I am so ugly/In my apathy.”

Fittingly, Warmth Equation toggles between two main musical moods: gorgeously bright and danceable (“Pete and Pete”), and complicated and textured (“Lilacs”). It’s similar to the music of Maryland group Julia Brown, with whom White has previously recorded. She’s also a friend of the group’s principal member, Sam Ray (aka Ricky Eat Acid), and the two of them share a love for the ways DIY culture can be propagated through the Internet.

We spoke with White about moving on from Julia Brown, Tumblr connections, and reckoning with openness and vulnerability.

To start, can you talk about how this album came together?

Originally, I thought I was kind of done with music, and I wasn’t really trying to make a new album. But I recorded the first song,“Drowning Here With All Of My Friends,” for [the most recent] Julia Brown album. We ended up not using it, so Sam [Ray] was like, ‘You can just use this for your album.’ That kind of made me want to start making music again. So I recorded that song, and then I kind of took a break from writing songs—which was nice, but it felt like there was something missing. So I started doing it again. Sam was on tour, but when he came back, he was sort of organically helping me record music again. For as long as I’ve known him, we’ve always kind of worked on stuff together and recorded stuff together, and before I knew it, I almost had enough songs to start an album. So I thought, ‘I guess I should just do this!’

I know you’ve been working with Orchid Tapes. That’s kind of how I found about your music.

That’s also something I kind of just grew into. I think at one point almost everyone I knew who was making music was releasing it through Orchid Tapes. That’s how I met a lot of my friends, and how I met a lot of people I know and make music with. I don’t know if Julia Brown was ever officially on Orchid Tapes, but we were heavily affiliated. That’s how I met Warren [Hildebrand, label owner]. I really like his music with Foxes in Fiction, so I started sending him my music, and he liked it. We became fast friends.

Can you tell me about the scene you were involved in when you started making music? Was it Internet-based, or local?

It was definitely not geographical at all—it was just based on the Internet. I don’t want to go on a huge rant about this, but I’m kind of against geographic scenes. Well, I’m not against them, but people can think they’re friends just because they have the same taste in music, and that can result in people geting away with a lot of stuff. I think it’s more genuine when you reach out to someone and are like, ‘Hey, I really like what you’re doing.’ Now that we have all these tools to be able to do that, we might as well take advantage of it.

I totally agree. I was a big Tumblr kid. I was practically raised on Tumblr. What are some spaces on the Internet where you found that [kind of] community?

Honestly, I used to be on Tumblr a lot too. I think, at this point, I have a funny relationship with Tumblr. It’s mostly younger kids who follow me now, and I kind of feel like their mother! They ask me advice about stuff. People ask me [for help] when they’re going through stuff, or if they’re having trouble. I mean, I’ve definitely created that—not ‘persona,’ necessarily—but that aura, that people can come to me and talk to me. That’s a lot of what my Internet presence is. It’s nice to connect with people in that way.

How do you think that aura comes through on this album?

I think that with this album, I’m trying to promote a kind of openness. For a while, I was trying to disconnect myself from the music I was making, because I was really afraid of criticism about my appearance or [even] appreciation of my appearance. I was afraid that would [get connected] my music and change the way people perceived it. That’s always something I’ve been wary of. Making the album art myself—it’s kind of scary! Already, people have been like, ‘Oh what is she wearing,’ ‘What is she doing,’ or, you know, whatever stupid comments they have. ‘Stupid hair!’ ‘Good hair!’ At the same time, I have to recognize that there are younger kids who look up to me and look up to some of my friends, and that puts me in a position where I have some influence. I want to try to be a good influence, especially on younger girls. You shouldn’t be ashamed of yourself, and if people say bad things about you or mean things about you, it doesn’t really matter. It’s on them.

One of things I noticed while listening to this album is that it’s very personal. Listening to it felt very intimate—I felt like I was really getting to know you. Was that your intention? What was it like to put yourself out there in that way?

It’s scary, but I also wanted to just be very accurate about who I am, and my experience. The album itself documents those three years right after my dad died, and there are these huge shifts in the songs [over the course of the grieving process]. There are some pop songs, but also songs that are purely eulogies. I think that when we think about grief, there are still, in 2016, these ideas about how women should grieve. Like, we think it should be chaste—the idea of the widow who wears black forever and lives alone and never has sex again. We don’t think about what it’s like the first time you have sex after someone you love dies. That’s a weird experience, but it happens, and that’s a part of reality. What’s the first time you feel really good when you’re still mourning? It’s not a black and white thing. I wanted to try and capture all of those feelings as best as I could, in the order that I was feeling them. It’s not just like that diagram where you’re like, ‘Okay, here’s my period of just pure mourning where I don’t do anything, and here’s my period of confusion, and here’s my period of anger.’ You go back and forth a lot.

Yeah, five stages of grief is kind of bullshit.

Can you tell me a few songs that stand out to you the most [on the album], ones where you’re really working through some of that?

The [single] “Wipe Down.” That song was one of those songs where I felt like I had already written it before I actually sat down to write it. Some songs are really difficult to write, and it feels like pulling teeth, but that song—I just wrote it, and [it] felt like I was kind of vomiting. It just wrote itself. I felt like I needed to express that overwhelming grief in some way so it didn’t consume [me]. The song “Heaven,” which is the last song on the album, [was] similar, but that song is a little more hopeful. I think that song most accurately expresses the stage I’m in now, where I’m still sad, but I can think about it and am more hopeful.

Has writing music become cathartic for you? Or is it just something that you have to do?

It’s a little bit of both. I’m into writing poetry as well, and sometimes it feels like I’m kind of torturing myself, because a lot of the process is thinking about these things and getting emotionally drained from thinking about [them] and trying to make something out of the overwhelming feelings of grief. Sometimes I think, ‘Why am I doing this to myself,’ or, ‘Maybe I’d be happier if I just stopped doing all of it.’ I think the most rewarding part of it is when I have the finished song, and I send it to someone or play it at a show, and someone comes up to me and says, ‘That song really connected with me. This happened to me and I understand that.’ Sometimes I have trouble expressing myself verbally, and I’m not always super eloquent—especially when it comes to feelings. I don’t talk about my feelings that often, and I need some kind of channel to be able to communicate with people. So I think of writing songs as a kind of translation. Like, what’s the most accurate translation of these feelings in order to communicate [best] with others?

What were some of the more empowering moments for you as you’ve been making music over the years?

I feel like I’ve met a lot of really amazing people, and a lot of really amazing people have reached out to me. I met a girl recently—her mom just died, and she’s been talking to me about it, and I’ve been trying to help her through it. She started taking creative writing classes at her college because she was reading some of my poetry. She’s been following me for a while, and has seen how my writing has progressed and the things I’m doing with it, and that got her really interested. [She] was telling me about that, and I thought that was really neat. I think poetry is a really amazing outlet. There’s another girl I met recently who had a similar experience, where her dad died suddenly. A professor that we both had connected us, and we started talking, and she came to my shows. They’re all very intense, emotional connections. It’s very cool.