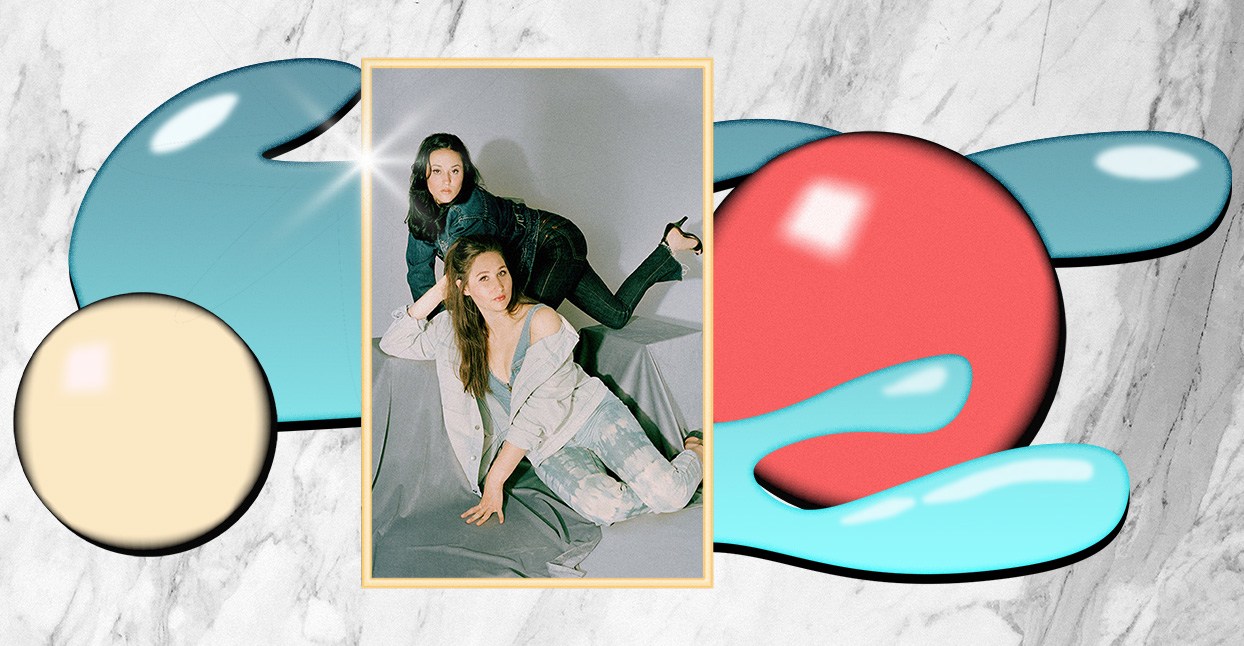 How do feminist performers grapple with the male gaze? For Toronto pop duo Ice Cream, the answer is to stare right back at it. Band members Amanda Crist and Carlyn Bezic have been toeing the line of surveyor and surveyed since their first release, 2016’s Love, Ice Cream, eight minimal tracks that fused synth-heavy electronic pop with post-punk. On their new album, Fed Up, the two face off against male entitlement, the dehumanization inherent to capitalism, and other societal ills.

“For me, what I’m singing about on Fed Up is definitely just wanting to break free of whatever mold has been placed on top of us,” Crist says. “It’s unnatural to me. It’s like a deep frustration that sometimes takes over.”

The debut single, “Peanut Butter,” was inspired by an odious customer Bezic served while bartending—a man who clearly felt it was his right to treat service workers poorly. “You built this and whatever it is, it isn’t for us,” Bezic sings over a dancey, electronic beat. The political bent and gritty, homemade-sounding beat are reminiscent of Le Tigre’s best work. The accompanying video features Crist and Bezic clad in all pink, performing in front of a glittery gold backdrop.

Though the tracks on this album are more polished and layered than on their previous recordings, they still have the DIY feel of people making music with whatever equipment they have on hand. To that end, Crist still plays the same Moog Rogue she bought in high school.

“It’s funny because often when people ask us what kind of music we make, like in our minds we make pop music,” Crist says. “I think on our first album, that was what we were trying to accomplish. But because we were not as good as our instruments, or were working with whatever equipment we had, it obviously came out sounding much weirder than that. I think as we progress and continue to write and get to know our instruments better and new ways of making music, we will keep going more towards pop music.”

“Modern Life,” a slower, jazzy number with backing saxophone and smooth R&B vocals, is certainly a more pop-leaning offering, and “Dove’s Cry” is one of the strongest tracks, a tender song about the limited nature of salvation through shopping and beauty treatments. The video, directed and edited by Bezic, is a brilliant rendition of the song’s mood and message. In one shot, Bezic sings, “They say you can’t find self-love through self-loathing/ But a quick fix will do me just fine,” over a shot of the bandmates carrying armloads of shopping bags. Self-pampering scenes recur throughout: the two in full makeup, wearing bathrobes, slathering themselves in oil or lathering on soap with heart-shaped sponges. It’s campy and glamorous. It sounds sexy, but the two are deadpan; they touch themselves with the clinical demeanor of a spa technician.

Ice Cream are well aware of the double-edged sword of being women in a public-facing medium, of not wanting to be objectified while, at least in some ways, making yourself into an object. “If you can’t escape the market, why stop working on its terms?,” the writer Jia Tolentino asks in Trick Mirror, in an essay on the insidious ways society still pressures women to conform to a certain aesthetic—naturally beautiful, thin but toned, and in the latest athleisure wear. It’s a sentiment Ice Cream seems to share. Their image appears highly calculated, from their glossy promotional shots to the artsy, it-girl outfits they wear in their videos.

“We do like to play with the gaze—the male gaze—on stage and within our visuals, and how you can control that and also not have any control over it,” Crist says.

It’s as if the two are daring the public to find them sexy, by packaging their conventional good looks in a cold, unemotional way. On Fed Up’s album cover, two feminine hands are joined as if arm wrestling; one sports long red talons. The art critic John Berger wrote that a woman is almost continually accompanied by her own image of herself. For Ice Cream, that image is of a woman furious about the conditions she’s been forced into, and who is hell-bent on expressing it with clear control.