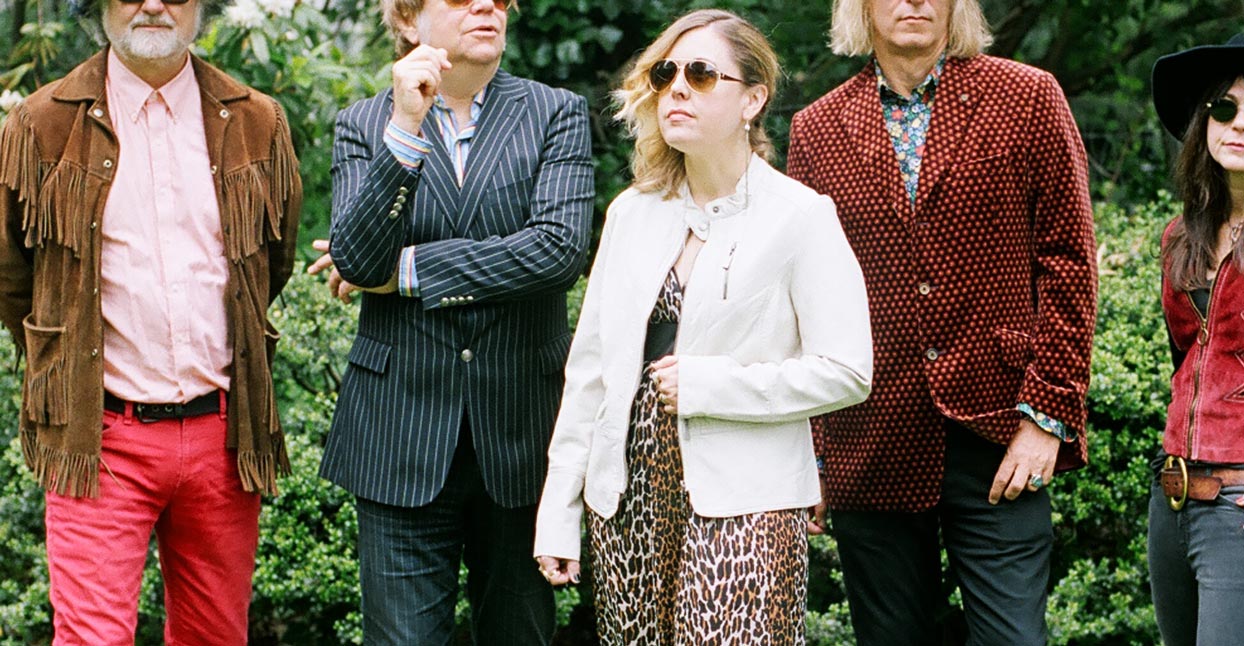 Listening to Grammy-winning producer Ian Brennan and Sleater-Kinney’s Corin Tucker assess the modern music landscape together should come with frequent flyer miles. The setting changes frequently during their frank evaluations of topics like genre classification, and authenticity as it relates to telling the stories of the disenfranchised, leaping from Norway to Tanzania to the Sanford, Florida neighborhood where Trayvon Martin was killed in 2012.

The two artists have long held a mutual admiration for one another, with Tucker penning the forward to Brennan’s thought-provoking book, How Music Dies (or Lives). Now, Tucker is on tour with Filthy Friends, the band she founded with R.E.M.’s Peter Buck, while Brennan continues to promote the Tanzania Albinism Collective, a project he helped put together that empowered the oft-maligned albino population of Lake Victoria’s Ukerewe Island to share their story through music.

Moderated by San Francisco music journalist Zack Ruskin, Brennan and Tucker’s conversation looks at the power of music as a universal language.

This interview has been edited and condensed for clarity.

The timing seems ripe to discuss how you both approach making political statements with your music. How do you successfully convey a message in song without making the music secondary?

Corin Tucker: In my case, with the Filthy Friends record, it definitely wasn’t planned to be released in such obviously divisive political times. We’ve been working on this album for several years—we started working on it in 2012.

I actually wrote the song ‘No Forgotten Son’ after Trayvon Martin was killed because I just found myself really moved by that death. I have a son who’s really similar in age to Trayvon and it really made me think about the whole Martin family and what they went through. I just put myself in the shoes of a mom having to raise an African-American son and thought about the struggles that would present. It’s incredibly frustrating and sad that we’ve seen the deaths of so many young African-American men and women at the hands of a police force that desperately needs to be formed in the U.S.

Ian Brennan: I think it’s really telling that in your empathy you use the word ‘sad,’ because I think beneath all of this, that’s what it is. I’ve been teaching violence prevention since 1993, in Oakland mostly. That’s where I started and continue to do a lot of work. These issues aren’t new, necessarily, and it’s sad to see the same thing reoccur again and again.

A big thing I’ve found in my travels is that true equality is being tough-minded with people. That means not putting them on a pedestal. You see that so much in ‘World Music’ as a genre. There’s this over-compensation that goes on, and it’s like, somebody from whatever country can suck, too and they can be an asshole, too. So be tough-minded with people in the same way that you would anywhere else. That’s the way that I approach it. I’m interested in them as a human. I start with love: love for them and love for music. I also love them enough to tell them the truth, which is that maybe they’re not doing something that’s good, and that maybe I don’t believe them. I push them in a constructive way to go deeper. That’s, for me, a starting point.

With ‘No Forgotten Son,’ how did you navigate being authentic to the subject matter while still retaining your own voice? Ian, was that something that came up with the Tanzania Albinism Collective as well—making sure their authentic voice was captured?

Tucker: As a writer, when I’m trying to write and think about issues, there are definitely lines that I won’t cross in terms of telling someone else’s story by taking their voice. With ‘No Forgotten Son,’ that song was to me about relating a feeling of sadness and thinking of the problem. The narrator in that song is really me. Sometimes I put myself in response mode, where I’m saying, ‘Wow, this is happening and it really bothers me.’ I think that part of starting a conversation about racial issues means that people of all races should be involved. Of course, I think it’s important to understand my privilege and to acknowledge it, but I don’t think that we should have that prevent white people from talking about issues of racial injustice.

Brennan: With the Tanzania Albinism Collective, it was very difficult because it’s a progressive experimental record with non-musicians, so it makes it that much easier for people to dismiss it. These are people who had never touched an instrument, never sung publicly. People there see their condition as shameful, as a curse, so if their parents even chose to keep them—which a lot of them did not—they would leave them behind, even when they went to church. When they told me that didn’t get to sing in church, I found that so shocking, because it’s the one sanctuary—even in times of slavery in America—where most people were afforded a chance to express themselves. They weren’t even allowed that.

[Albinism Collective singer] Thereza Phinias Mkaruka talks about how being someone with albinism, there’s this constant threat that somebody’s going to come in the night and chop off your arm or rape you or and kill you, and yet she’s still so positive. That’s courage, but I don’t know that they even want to be that courageous. They have to be that courageous. They just don’t have a choice.

Brennan: What’s so frustrating is to meet amazingly great people from all over the world who are just left confined within their own borders because they don’t sing in English. I don’t really like genres. The songs and the voices have to speak for themselves. They have to stand alone.

With the Tanzania Albinism Collective, I fought really hard because of the experience with the Zomba Prison Project, where there was kind of a backlash with some people looking at it as a novelty or that the story was the only reason they should care. There’s a woman, Irene, on the record who has one of the most original voices I’ve ever heard in my life. She doesn’t sound like anybody I’ve ever heard. I couldn’t even compare one percent of her voice to anybody else. So that’s the reason the record exists. The story is great, but it’s secondary.

Why do you think music is such a powerful or important way for people to tell stories?

Brennan: I think it’s primal. Every child on Earth is born being able to make every sound that exists in every language. When we adopt the mother tongue, we have to censor that. You have to stop that process of being musical. With music, you can send a message that’s not literal but which may ultimately be more powerful. Corin, when did you start playing music? You were young, right?

Tucker: Yeah, I started playing when I was like 17.

Brennan: Were you like a huge music lover before that?

Brennan: So it was always a part of your life?

Tucker: Yeah, definitely. I mean, I started really singing as a child with my dad, because he was a hobby musician. So I grew up singing, and I think that was really powerful because, like you said, it’s not an academic or an intellectual way to tell a story. People react emotionally, I think, to hearing somebody’s story through music. I think it’s a really big connection for people, to just for a moment imagine someone else’s life. When you’re listening to music, you really feel the story.

Brennan: I remember when I came up to Portland to do a Ramblin’ Jack Elliott record, and you sang on it, you mentioned something about your father being really into folk and bluegrass and stuff.

Tucker: Yes. He played folk music as a hobby while he was in college and even opened for Pete Seeger once.

Brennan: When you say you started singing with him, how old were you?

Tucker: Way! He would make all these recordings of it. He still has them. It’s really funny. He was one of the first people to have a reel-to-reel tape player.

Corin, Ian reminded me that you recently worked with an indigenous group in Norway. What was that experience like?

Tucker: Yes, with the Saami people in Norway. They are the indigenous people there. I just did a music festival in Vadsø, Norway that was organized by Michèle Noach, who is an artist who works around climate change and she does this music festival where she brings together different artists from around the world. She also collaborated with a local Norwegian council in Vadsø—in very far north Norway—and they brought together some of the Saami people, who are also called throat singers, because of the kind of singing that they do.

They’ve undergone a lot of persecution over the years, from Norway and Scandinavia, over their religion, customs, traditions, land, and music. We actually backed-up one of the singers. He’s a [Norway’s Grammy equivalent] Spellemannprisen-winning Norwegian artist. We got to work with him and it was an amazing experience to combine rock with this traditional kind of indigenous music. It was really unique and very inspiring for me.

Brennan: I feel like it’s such a privilege to have intimacy with people musically, and to trust and learn from them. That’s my favorite part of recording: just being there, close to somebody. when they’re creating something. With Filthy Friends, was that experience different from recording with Sleater-Kinney? Your group is all men now, right?

Tucker: We actually have a woman drummer, but I was definitely the only female in the band when we made the album. It was actually very similar to the way that my other band works. After a couple of days writing songs and working on things, it was like, ‘Oh, they work exactly the same way that Sleater-Kinney does.’ Everybody was yelling things out and changing things at the last minute and they were completely open to listening to my ideas. If I want to do this and this and then change it to this, that was totally cool.

I’m glad to hear that. By the way, the dynamic you have in Sleater-Kinney is really incredible. I think the best part of seeing Sleater-Kinney live is that it’s impossible to decide who to watch. You’re all out on stage giving everything. It’s hard to know where to focus.

Brennan: You just defined what makes a great band. There aren’t many left. I’m not trying to be an old fogey, but there used to be a time when a band was based more on having to be in a van and play 200 shows a year. There had to be something special about the band too. Most bands had at least one person who was just amazing at something, and with great bands, everybody was amazing.