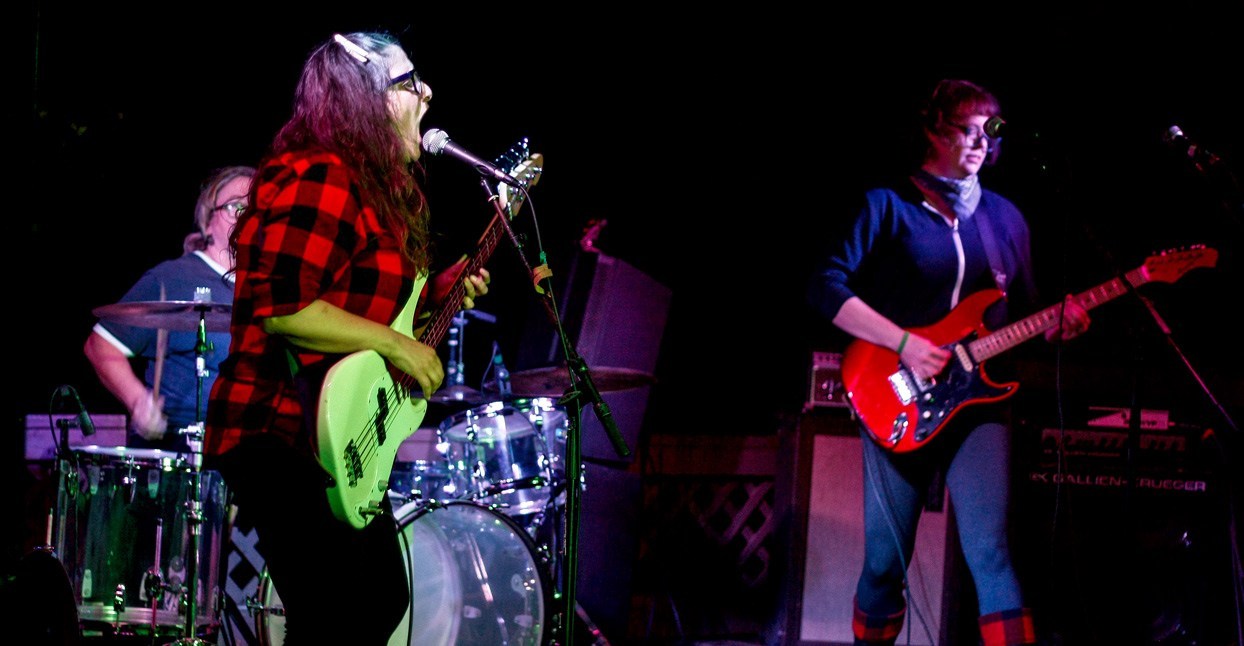 Petrillo at The PRF Camp Out by Zach Hench

In 2010, when Karl Rove released his autobiography, Courage and Consequence, musician Conan Neutron assembled a compilation in order to protest it. He put a goofy cartoon drawing of the political operative on the cover, included a bunch of anti-Rove songs, and released it before Rove released his book just to mess with online search results.

This was no small task, so Neutron turned to his artistic community—a loose collective called the PRF—for help. He was in luck: there was no shortage of people in the PRF eager to make Neutron’s protest happen. Some bands contributed songs to the comp, others helped with engineering. After its release, a member of the PRF community even took the album to a Karl Rove book signing and tried to get Rove’s autograph on it. Not surprisingly, they came back without the signature.

Still, Neutron’s plan would not have happened without the PRF (short for Premier Rock Forum). “It was organized very quickly,” he says. “We put it out in the course of two months. That’s the kind of thing this community does on a fairly regular basis.”

But what is the PRF exactly? There’s no simple definition, but to best understand it, you need to go back to the early 2000s to Electrical Audio, the website for Steve Albini’s recording studio.

In addition to info about the studio itself, there’s a forum. Albini set up a handful of rooms: Tech Room, General Discussion, Crap/Not Crap. Music nerds all over the world found this website/forum because they were Steve Albini fans, and they could ask him questions, like how he produced a guitar tone on a specific song—and he would often answer them. Other band people from the indie rock scene (like Silkworm and the Didjits) would pipe in on conversations as well.

Eventually, something funny happened: all these music nerds created their own communities, and devoted hours online, talking with each other about anything and everything. “I started hanging out here in 2005,” says Zach Hench, a PRF disciple. “This is around the time of Myspace, and a year before Facebook got beyond the ivy league. So, this was it, man. This was social media at its finest. No photos, let alone video or anything, just a slew of threads. People are talking about their bands or shows or politics or whatever it was.”

Oddly, many of the people who congregated on the forum first virtually met one another in the ‘90s on an email list for the Illinois indie rock band Poster Children. “[They] were one of the first bands in the ‘90s to adopt a lot of what we consider early social media,” says DJ Hostettler, a PRF community member. “They were one of the first bands to do online tour diaries, which would be a tour blog now. A lot of really nerdy music fans gravitated towards them from that. A lot of us were nerdy awkward people in our early 20s.”

It wasn’t a direct cross over from the ’90s to the 2000s, but as more music fanatics started discovering the Electrical Audio forum, they also noticed that their friends from the Poster Children listserv were there. It confirmed for them that this was the place to gather online and talk about gear, and which bands they liked and didn’t. In 2006, several members convened at a party celebrating the 25th anniversary of the Touch and Go label. PRF officials latched onto the event, using it as an opportunity for its members to meet in real life.

“It was great,” says Hench, who was at the Touch and Go afterparty. “It was like any other basement show where there’s probably a hundred people in a room that’s meant for 30 people. It was about 2am, after everybody had spent the entire day listening to some of their favorite bands play ferocious sets in the blazing sun. Everyone was pretty blurry and bleary at that point, but it was also really fun. That was sort of like a germ.”

In the years that followed, the forum and its community continued to grow. Members met casually more often. Many, of course, were in bands. Of the bands within the PRF community, a few include Police Teeth (powerhouse, guttural punk rock), The Rutabega (catchy indie-pop with heavy emotional punches), Motherfucker (riff-laden arena rock with sprinklings of math rock), The Columbines (gritty rockabilly), IfIHadAHiFi (offbeat new wave-y noise-pop), and Conan Neutron & The Secret Friends (deep bass-y classic rock-influenced alt-rock).

By 2009, PRF members got an even more novel idea: to turn the PRF into an official event. The show was held in the same venue as the Touch and Go afterparty (at the Union Rock Yards basement), but this time, it was its own several-day event with roughly 20 bands from the PRF community. They called it the PRF BBQ.

“We had grills set up outside. We brought our own beverages, brought our own food. Everybody contributed. It was very DIY. It was really like a big potluck BBQ,” says Hostettler. “Not a lot of people have been interested in heavily promoting it to the outside world. Basically, it’s a group of friends. For the first one, it was mostly people on the forum or their friends.”

Hundreds of people came out. The following year, they held another PRF BBQ in Chicago. Dixie Jacobs, who would later marry Hostettler, attended the second one. “There were definitely shit-tons of people I have never seen before that I met, and tons of bands I loved, and that just kept occurring each time we would go to one of these things,” Jacobs says. “It would be like your favorite new band. ‘Where have you been all of my life?’ That kind of experience. Then all the sudden you’re with all of your friends.”

The Chicago PRF BBQ has happened every year since 2009. But other PRF events have popped up in other cities, like in Oakland (which Neutron started), Louisville, Upper Michigan, the U.K., and more. The weirdest ones are PRF Camp Out, which takes place at a children’s camp facility in Southern Michigan, and PRF Thundersnow, which takes place in an ice fishing hotel in northern Michigan.

“It’s become an annual tradition to have a killer dance party in the fish cleaning room,” Hench says of Thundersnow. “The fish cleaning room is about the size of your bathroom and you cram a hundred people in there at two in the morning, just dancing. It’s negative 20 outside and you walk in and it’s Studio 54 in there, but with better music.”

As the community grew and members got to know one another better, people worked together on more projects. The biggest is the PRF Monthly Tribute Series—which started in 2014—and continues to this day, and is as popular as ever. All of the compilations are on Bandcamp. “PRF is not about building a brand or anything like that,” Hostettler says. “It’s very much a community, [not the] music scene that most people would think of it as.”

The Tribute Series, which was started by Hench, began years earlier as a weekly songwriting challenge. Hench would post prompts and people would try to make songs out of them. The people in the PRF community have fluctuated over the years (what constitutes being in the community is loose, though anyone who’s not a jerk is welcome), but it’s never gotten too big, and there’s always been enough people to make cool shit happen on a regular basis. People still regularly post in the Electrical Audio forum, and though it’s grown to include different shows, projects, and compilation albums, its culture hasn’t really changed much.

“It’s not a commercial enterprise,” Neutron says. “Charlatans and salespeople are quickly rooted out. Some people get the wrong idea, like, ‘Oh cool, a bunch of people to market to. That has very hilarious results.”

Says Hench: “If you would have told me, in 2003, to get on this message board and start posting a bunch of nonsense, and then 15 years later, you’ll have played in some of the best bands you’ve ever played in and you will have seen some of the best bands you’ve ever seen, and you will have made like literally dozens if not hundreds of really close friends that you consider to be family, I never would have believed that. That doesn’t make any sense. It’s a really cool thing. I’m tremendously thankful for it.”