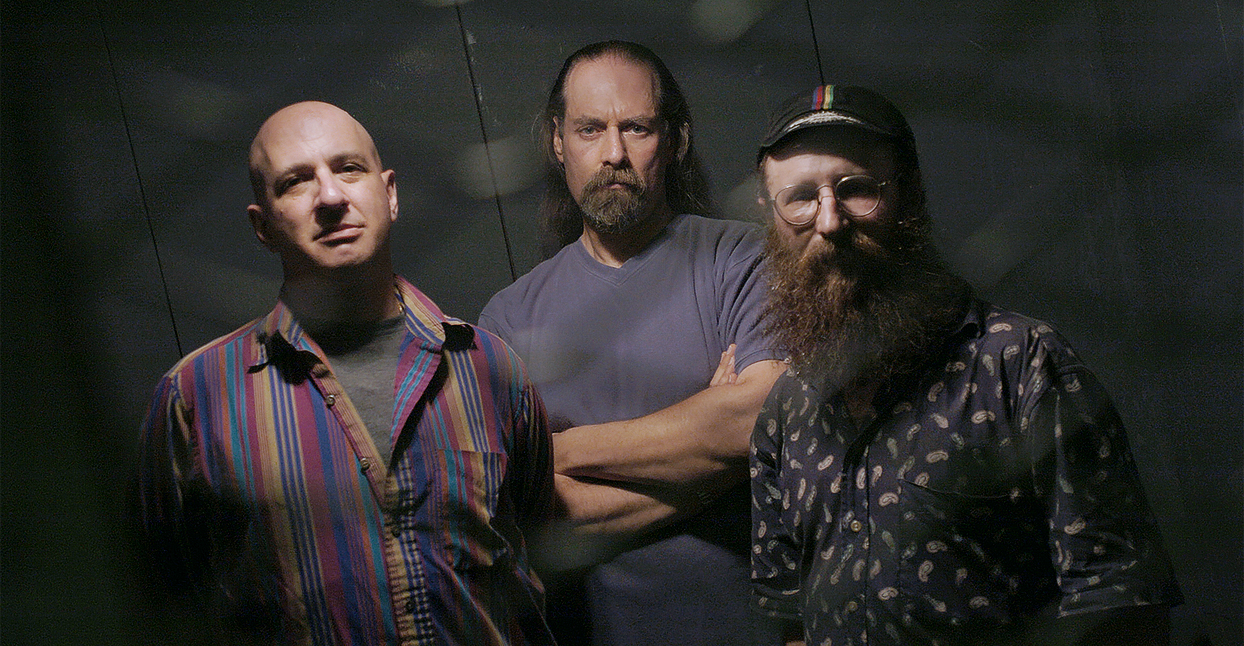 “I decided to take more liberties and just go with the things I was hearing in my head—and damn the consequences of it not necessarily representing what we did live.”

David First is an eclectic composer who’s written chamber operas, microtonal drone pieces, and compositions for a quartet of musicians using Casio keyboards. Yet one of the unexpected through-lines of First’s diverse career has been his participation in the punk subgenre known as “no wave.”

During this art-rock scene’s late ’70s and early ’80s heyday, First’s instrumental power trio, Notekillers, helped codify the style—playing in Philadelphia, and occasionally in New York. Though Notekillers went mostly unheralded during their initial five-year run, the band’s sole 7-inch single made a deep impression on Sonic Youth’s Thurston Moore, who later tipped his hat to the group and released an archival set of early recordings.

“Same animal, different cages” is a phrase that First originally used to describe his approach to each individual song, during his early run with Notekillers. The motto is also useful to keep in mind when approaching First’s variety of musical projects. Each song can sound radically different on a surface level, yet the contemplative mood of a First composition can be identified in an acoustic guitar piece just as easily as it can be found in a piece for analog synths—or a punk band. It’s obvious that First is always looking for a new challenge; appropriately, “Same Animal, Different Cages” is also the title of an in-process series of First solo recordings, which have started to be released by Fabrica Records.

In the meantime, Notekillers have been creating and playing new material since their reboot in 2004. Their first comeback set, We’re Here to Help, hit in 2010. And on their latest reunion album, Songs and Jams Vol. 1, they try out some new tricks—including working with a vocalist as well as giving their free-improvisation side equal time. We spoke with First about how he’s approached Notekillers’ mission over the decades, and how these albums fit in alongside his other pursuits.

This new album sounds recognizably like some past Notekillers work, though with lots of new approaches added to the mix. Was that always the conscious plan—or did it just happen that way?

We’re Here to Help was an attempt to create our live sound, and to stick with that as much as possible—the idea of, “OK, there’s going to be minimal guitar overdubs, and maybe some saxes on one track.” But [otherwise] to give it as much of that elemental, live-in-the-studio sound as possible. Whereas with the new one, I decided to take more liberties and just go with the things I was hearing in my head—and damn the consequences of it not necessarily representing what we did live.

Avant-garde vocalist Shelley Hirsch’s appearance on “Missilebones” marks the first time the band has recorded with a vocalist, too. How did that come about?

I’ve always said the Notekillers didn’t have a singer because we didn’t know anyone like Shelley back then. If there was going to be one, it would be her! Also, the whole idea of a Notekillers song is that there’s not supposed to be a place for a vocalist—or else there’s something missing! So it can be difficult, because we’re not necessarily going back and forth with straight verse-chorus scenarios. But that song somehow still seemed to leave a space for something.

Shelley’s a big force in New York’s experimental scene. How long have you known her?

Shelley was one of the first people I met when I moved to New York in the mid ‘80s. But it took us awhile to actually do anything together. Then, when the Notekillers got back together, we were always sort of asking people to sit in with us. Mostly horn players. The organization Harvestworks was holding a benefit, and they asked us to play—and that was the first time we all worked together. We did a version of Bob Dylan’s “It’s Alright Ma (I’m Only Bleeding)” and that went really well. She’s improvised with us a couple of times since then. And I decided it would be cool to try this.

The track was already one we were performing instrumentally. I asked her if she wanted to come up with something. And it was really kind of strange—because the title was already “Missilebones,” which was my title. But at the time, she was having this long distance relationship—I mean you can kind of get it from her words, but it’s a little cryptic—with this tall, skinny man who was working at NASA. And this was actually going on in her life right then! This is the kind of stuff you get with Shelley; she has all these magical things that seem to erupt. And she said, “Well, this is perfect,” and she came up with those lyrics. She sang it twice, and she nailed it!

Were all the tracks on this album from the same sessions, or do the songs and jams come from different eras?

Some of the tracks actually pre-date We’re Here to Help. And the improvisations on Side B are very recent. Instead of using all the time, during sessions, to try to and get songs together, the idea was to not think of anything else except improvising for a couple of days. Overall, I guess we were looking to show everything we can do in a more clearly distilled way—and so the record is a combination of those two things for that reason. And that was how we came up with the idea of the Songs and Jams title, just to make everything really clear.

It’s an engaging mix of styles. I was struck by some of the subtler touches—like those chiming bells, toward the end of “Crash.”

Yep! There are bells on that—just a little xylophone-kinda thing. And there are tubular bells on “Foster,” at the end. I just let myself go! And on “Ants,” there’s an overdubbed synthesizer part that I came up with. I indulged in a bit of what I would do if it was my record—instead of it being the Notekillers—without totally corrupting the whole concept.

If you had to boil down “the whole concept” of Notekillers, what would it be?

I guess it’s this: the rhythm guitarist can also be a lead guitarist. I kind of hate when I feel like I’m a lead guitarist in a band. My approach always has to feel like it’s part of something more inherent to the song structure. So it’s always about trying to fulfill both roles at the same time. On the one hand, to create enough variation to, well, justify continuing with the song! But at the same time, there always has to be some sort of structural integrity to whatever’s going on. It can take months—and even longer sometimes—to come up with a perfect formula.

I try to make each song unique, so it doesn’t sound like something else we’ve done. But the real challenge is to take it to the other two guys [bassist Stephen Bilenky and drummer Barry Halkin] and literally start saying “try this” or “try that.” It really is trial and error. I can’t work that stuff out at home; I have to hear the live drums, and see where it goes.

And now you live in different cities, too, right?

Yeah, I’m in Greenpoint, Brooklyn, and they’re in Philadelphia. The one thing I always told these guys right from the beginning—when it seemed like we were going to get back together—was that this needed to be a creative venture for me. I didn’t want it to be an oldies act, trying to recreate something. That wouldn’t be interesting to me. I definitely tapped into some of the same ways of thinking and playing that I hadn’t done since [our early years] … But I had to find a way for it to fit in with what I felt like my musical life was at that point. I don’t know how deep the well is!

The title of this album has the words “Volume One” appended to it. There better be more!

[laughs] Well, that was a little bit of a nod to the idea that it won’t be the only one! I like that idea, it kind of keeps us on our toes, too. There will be a Vol. 2. I can’t say right now what it’s going to be made up of. We have some material still around and I’m sure we’ll be doing some more jamming, too.

You’re also in the midst of releasing a series of solo sets, where each album focuses on one instrument at a time. Do you see your playing as materially different on those recordings, versus Notekillers sessions? Or is it all part of the same thing?

Well they’re both me! I’m not really sure actually how different it is. It comes down to the properties of the instrument, more than I feel like I am becoming a different type of guitar player. There are certain things that just resonate on acoustic guitar and present themselves as possibilities on acoustic guitar that don’t on electric, and obviously vice versa.

The whole project is all about trying to explore that. I guess that’s what everybody does whenever they’re playing an instrument, of course—but I wanted to go a little deeper than I had previously on each instrument. And even teach myself a couple of new ones.

How many are planned and recorded at this point?

The first four are planned, and I hope to go beyond that. The first three are recorded already and the fourth one I’m working on right now. The second one—an analog synth record—will probably come out in late September or early October. The third one, which is going to be a solo harmonica record, I would guess it would come out some time around the New Year. The fourth volume is going to be me on sitar! And I started playing that in December. So we’ll be recording that one soon. I wanted to give myself at least a few months, to get some chops on the instrument. And some ideas!