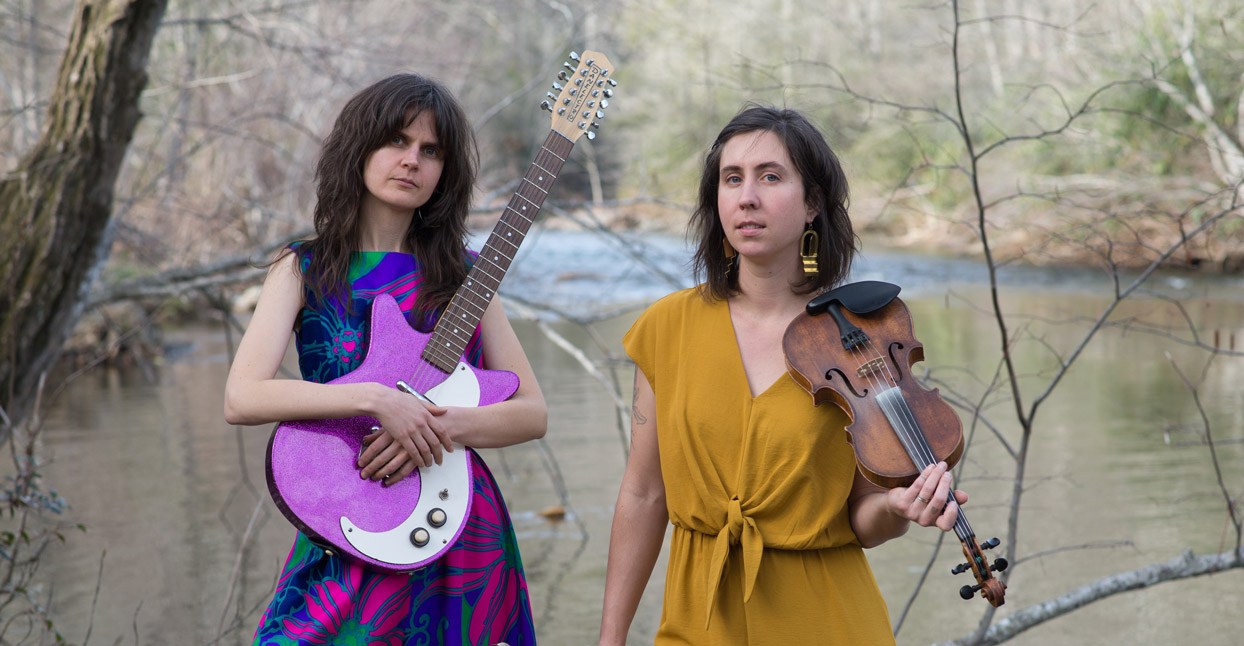 Multi-instrumentalists Sally Anne Morgan and Sarah Louise contend that folk music—often associated with a sense of traditionalism—has always been a more dynamic artform than we’ve been led to believe. With Across the Field, their second album as the duo House and Land, Morgan and Louise once again give us reason to view the folk stylings that emerged from Scotland, Ireland, England, Appalachia, and the Ozarks through a broader lens. Both heavily steeped in these forms, Morgan (Black Twig Pickers, Pelt) and Louise speak engagingly on the history and development of the music over a group phone call.

“People have often used folk music for their own agendas, whether it’s political, academic, or whatever,” Louise explains. “Because this music is so rich, it’s attracted a lot of people who want to define it and use that to their own ends, well-intended or not. But that doesn’t change what the essential nature of folk music is, which is expansive and fluid. One of my enduring interests in Appalachian music is that it is truly global music, and it has room for whatever you feel like putting in it. Whenever people start talking about this idea that ‘Oh, we must keep folk music this way or that way,’ it’s not rooted in the real reality or history of the music at all.”

Though Across the Field consists entirely of traditional songs, Morgan and Louise use violin and guitar, respectively (along with a host of other instruments) to infuse the songs with subtle shades of psychedelia and improvisation. The album veers between moments of relatively unembellished immediacy, mostly concentrated in its first half, to a more experimental range of tones in its second half. On album opener “Two Sisters,” for example, Louise’s electric guitar notes trickle like a gentle brook over chalky banjo picking from Morgan that sounds like it was recorded just two feet away. The pair’s vocals, meanwhile, entwine in a pleasant harmony that belies the traditional murder ballad’s grim tale of jealousy between sisters that leaves both of them dead.

Conversely, Louise dials up the distortion on “Carolina Lady,” an instrumental rendition of the ballad “The Lady of Carlisle.” Over a minimal (though oddly spacious) arrangement of guitar, violin, and the insistent, hypnotic thud of a kick drum, Louise and Morgan extend the drone for almost eight minutes. If a modern guitarist landed—with pedals, amp, and all—in the year 1650 and wanted to connect with another musician without startling the locals into fits of terror, the resulting exchange might sound like “Carolina Lady.” Which is to say that House and Land aren’t radically altering the source material so much as letting the songs live and breathe according to whatever sounds are available to us in the present day—the very same thing, Morgan and Louise maintain, that so many others have done before them over millennia.

“With the exception of the Black Twig Pickers,” says Morgan, “most of the people I’ve played with are pretty—I don’t know if ‘purist’ is the right word, but they’re only interested in the old fiddle stuff and get really obsessed with it, to the point of excluding a lot of other kinds of music. So it was really refreshing to find someone else who both loved the old stuff and some weirder stuff. But it was never like, ‘OK, how can we make this weird?’ It just naturally derives from how we approach the music.”

Likewise, though the pair recast several of the songs from a feminine perspective, they’re quick to point out that that decision wasn’t forced either.

“We don’t have an agenda,” Louise offers. “It’s not like, ‘We must change this.’ But it’s more like, ‘How can this song live through us in the most authentic way possible?’ To get to that authenticity, even though it may seem counterintuitive, that involves changing it sometimes. In these ballads, there’s tons of examples of violence against women or, for example, women being forced into practicing infanticide because of patriarchal institutions. That history is there. This music is a valuable repository of history as well. We’re not trying to erase anything, but for example, in ‘Rainbow ‘Mid Life’s Willows,’ when the father and brothers are chaining this woman up in a basement because they want to keep her from her true love, I’m not going to sing that they’re wise. I’m going to sing that they’re cruel.”