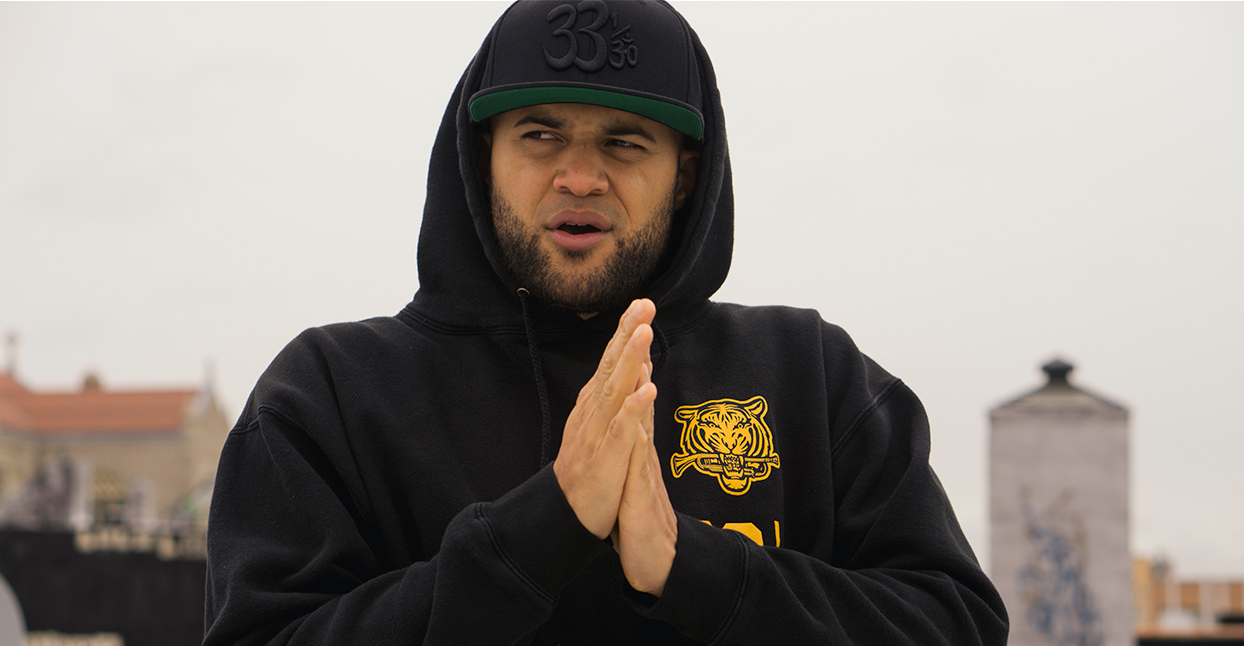 You don’t have to speak with Homeboy Sandman long to realize how engaging he is. The Queens MC has such a unique style of storytelling, you’re instantly drawn in. So it only felt natural to give Boy Sand his own Bandcamp column. This is the first installment.

“Some other brands that never broke through / if you knew Olympians I guess that you was broke too.” (“Feet,” unreleased)

The age when kids start snapping on each other for being poor had come around, and I was still shopping for sneakers at Fayva.

Fayva was like the predecessor to PayLess. I assume so anyway. I’ve never stepped foot in a PayLess. I’m too traumatized by Fayva.

Late in my Fayva tenure, I’d discover that they actually did offer some socially acceptable brands, most notably Adidas. Their stock included the Adidas Phantom, as well as several other models identical to the Phantom inexplicably bearing different names. Having seen the Phantom advertised on television naturally they were my preference. They resembled the Adidas that Run DMC was popularizing at the time and, as added social capital, were so inexpensive that my mother was able to buy me new pairs fairly regularly, keeping me pretty fresh. Somewhat fresh. They were still Phantoms. They still got snapped on for not being shelltops. I didn’t care. At least they weren’t Olympians.

Olympians were the Fayva brand sneaker. They were the precursor to the sneakers you see in the window at the .99 cents store, that from 10 feet away already reveal themselves as cheap knockoffs of popular sneakers but up close are more akin to clunky medical shoes.

A pair of Olympians cost about $12. About a dollar for each day they’d last. It was not unusual by week three for a host of maladies to befall even the most casually worn pair. Busted seems. Frayed stitching.  The most dreadful of them all was the detached heel.

Given my family’s mandatory predilection to frugality, a full two inch’s worth of sock was commonly visible before a pair of Olympians was deemed fit for replacement. The days/weeks leading up to a new pair were always the same. “Hey Angel, quiet down for a sec I wanna hear what your sneakers are saying.” “What are those things eating?” The heel flapped with every step that I took. Sports activities always served to amplify the predicament. My first signature shoe wasn’t a pair of Jordans or a pair of Ewings or even a pair of Chuck Taylors. “Look at Angel! He be rocking them Pac-Mans!”

Pac-Mans or not, I was picked first for every team. I wasn’t the quickest kid but I was usually the tallest and always one of the most athletic. The better part of my school day was spent counting seconds until the last period—gym.

“Crossed over into carpentry and got with R.Thentic / and started targeting the kids that only show up for gym.” (“Starman,” unreleased)

This was maybe third or fourth grade. I myself was capable of taking part in a sustained contest of basketball or baseball, but many of my classmates lagged too far behind for legitimate sporting events. Gym class was for kids’ sports. Individually I became a dodgeball legend. I actually bruised a kid once with a dodgeball. Ask anybody.

As a team player, my greatest achievement was leading my gym class all the way to the school-wide kickball championship. It was a pretty big deal. The championship was played outdoors instead of in the gym, allowing for the entire student body to be in attendance. As if that wasn’t enough, a pizza party was promised to the winning team, a prize more coveted by elementary schoolers than a super bowl ring could ever be.

The game was a classic. I’d take you through it play by play if I could. Andy was killing us. I couldn’t stand Andy. He was always greasy. His face was greasy his hands were greasy. I remember Courtney actually managed to strike out, a feat previously regarded as impossible for anyone with even the most rudimentary motor skills. (Poor Courtney wasn’t even all that useless. His nerves were just so racked from having to perform in front of the whole school. Pressure busts pipes). Beyond that, all I’m certain of is that we were down one run with two outs and the bases loaded, and it was my turn to kick. A very Casey Jones-like situation.

Courtney’s ineptitude haunted me. “I’m not going out like that,” I thought. “I’m going to kick this ball across the street.” I was focused. Locked in. All that existed was my foot and the ball. The condition of my deteriorated Olympians never even occurred to me.

The adrenaline was too much. I could barely wait for the ball to be rolled to me.  I began my kicking motion way too early. My only option was to compensate for the timing deficiency with power. It may have been the brute velocity of my leg swinging through the air. Or maybe it was the unusual way that the ball connected with my foot, more under it than in front of it because I had kicked too early. Or it may have been due entirely to thrift, neglect, and an Olympian heel just a bit more detached than any other I’d ever played kickball in. Whatever the reason, the dismay that I felt at making poor contact with the ball transformed into sheer horror as the entire sole of my sneaker peeled from my foot and went hurling through the air.

Time stood still. I remember it like I remember hearing that Biggie was shot. I wanted to evaporate. Not only had I kicked an easily playable ball that would result in us losing the championship, but my shoe had fallen apart in front of the entire school.

My pitiful stupor was interrupted by a chorus of screaming teammates. “RUN!”

I ran. Without being able to make sense of it. Feeling the concrete underneath my sock with every stride. Wondering if it would have made more sense to save my energy for the avalanche of shaming certain to begin at any moment. To my surprise, I arrived at first base before the ball did. I’d barely begun heading to second when I was mobbed my teammates. Everyone was cheering. It was pandemonium.

For five minutes, we lost our minds jumping up and down in celebration! Before I knew it the principal was calling for order, and congratulating my class on his funnel shaped megaphone. With every jump I felt pebbles and rocks up against the sock left unprotected by my bottomless sneaker, but no one was making fun of me. No one even seemed to have noticed.

Out of the corner of my eye I spotted Andy, tears running out of his eyes, pleading with Ms. Solara. “What a sore loser,” I thought. All of the other kids had begun to disperse, but Andy just wouldn’t quit. “It’s not fair! It’s not fair!”

During the game Andy had been playing shortstop. He may have been greasy but he was a good kickball player. Once he picked up on my botched kick the game was all but over, until my no frills footwear came to the rescue. As the bottom of my sneaker flew into the air Andy’s cat-like reflexes betrayed him. Instead of tracking the ball, he instinctively reacted to the flying sole, the pursuit of which took him out of position to make what otherwise would have been a routine play. By the time he realized what he was doing, the ball had passed by him into the outfield, giving my team the base hit that we needed to win.

Shortly after the celebration died down, Ms. Solara walked over to me holding the game saving flap of rubber (or plastic, or whatever it was those shoes were made of). Andy had finally given up pleading with her. “Might be time for a new pair,” she smiled as she handed it to me.

On any other day a classmate of mine likely would have retrieved it, taunting me mercilessly, perhaps throwing it back and forth between other classmates while I tried to capture it enduring my own personal nightmare. Not this time though. Indigence had saved the day. It was the ace up my sleeve allowing me to topple Greasy Andy and his minions. There would be no Pac-man jokes. No pointing and teasing as I walked towards the bus stop in a blackened sock loosely cloaked in a thin sneaker shell. I was no joke. I was Angel Del Villar, the winner, who delivered the game winning kick, carrying his gym class to victory.