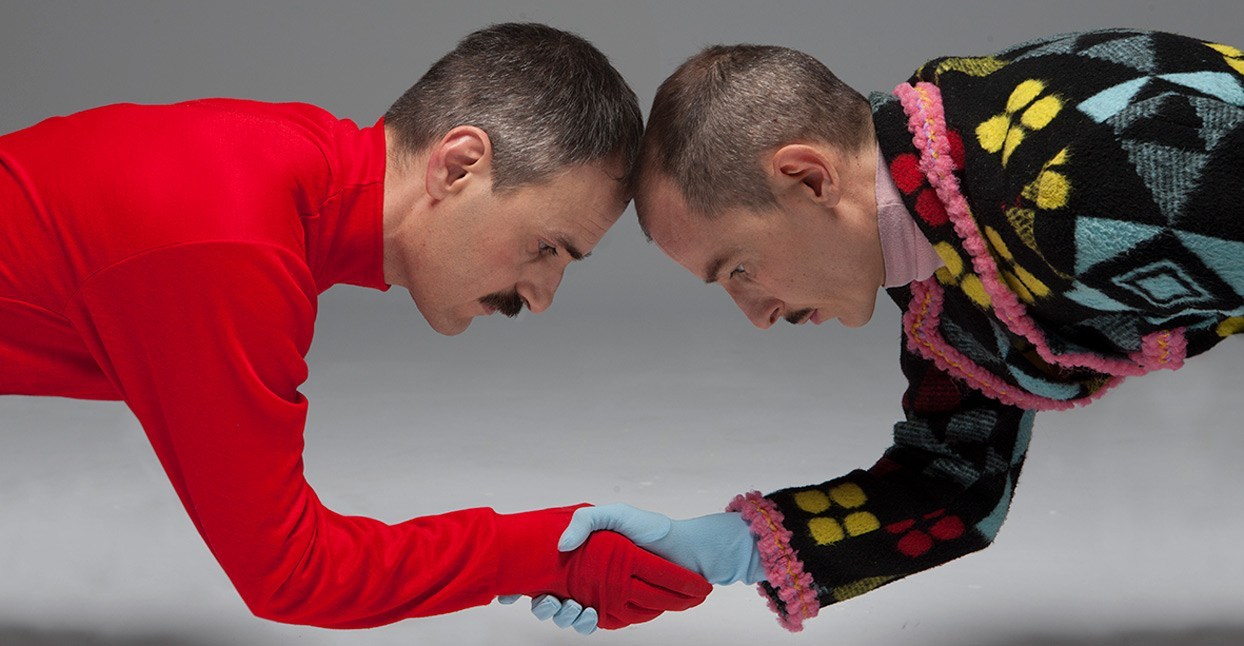 On a balmy evening in February, hundreds of spectators gathered at the Casa del Lago bandshell in Mexico City’s Chapultepec Park to witness Hidrogenesse’s first Latin American show in years. As the sun began to set, singer Carlos Ballesteros emerged dressed in an extravagant sequined kimono, which sparkled in vibrant pinks, purples, and yellows under the lights. He was followed by synth wizard Genís Segarra—a monochromatic dream in nude bodysuit, pumps, and matching tulle cape, with the faintest wisp of a veil draped across his face.

Hidrogenesse’s campy melodrama and witty banter are hallmarks of their 22-year career, but on this particular evening they were just a prelude; the group’s frenzied fans were dying to dance and sing along to modern indiepop classics like “Disfraz de Tigre” and “No Hay Nada Más Triste Que Lo Tuyo.” Before long, the park became an outdoor disco, packed with wide-eyed party children and stars of Mexico City’s queer underground. With the crowd firmly within their grasp, the band unveiled the first cuts from their latest album, Joterías Bobas.

It makes sense for the quirky Spanish duo to debut their new material on a Mexican stage. After all, a Mexican internet troll sparked much of the early writing process. “About five years ago we performed at a music festival,” remembers Segarra from the pair’s temporary Mexico City apartment, “and someone on Twitter referred to our music as ‘joterías bobas’ (Mexican slang for ‘silly f*ggotry’). So we responded ‘Claro que sí!’ (‘Of course!’). After mulling it over a bit we realized we had stumbled onto the titles for an album and a song.”

Much of Joterías Bobas is rooted in experiences cultivated while on tour in Mexico. “Xochimilco” taps into the pair’s love of urban exploration, painting a melancholy portrait of Mexico City’s sinking Xochimilco delta, a fertile source of flowers, produce and wildlife that’s being polluted at alarming rates. On “Brujerías Jotas,” they embrace the Mexican slur for gay men, and turn it into a prayer for preposterously shallow queer priorities, like comfortable shoes and the everlasting health of Grace Jones.

Throughout their career, Hidrogenesse’s music has been characterized by a remarkable balance between sarcastic humor and an earnest metabolizing of the world around them. On “Se Malogró,” a bouncy danzón-flavored lament easily interpreted as a tale of heartbreak, they mourn broken drum machines and deteriorating synthesizers. On “Nombre de Flor” and its reprise “La Flor Otra Vez,” the Spaniards recount a memorable visit to a Mexican flower market, where their friend and guide Jorge Pedro confused a shopkeeper by asking if they sold any flowers that were his namesake. “I’ve heard of lilies and roses, but have you ever heard of a flower named Jorge Pedro?” recalls Segarra with amusement. Though bizarre, the band seize this question as an opportunity to imagine what that flower might look and smell like, while simultaneously paying cheeky homage to their adventurous friend.

Hidrogenesse’s ability to find joy in life’s small everyday absurdities has grown from a songwriting signature into an  essential tool for creative survival—particularly as the world plunges deeper into virulent social media self-righteousness and rising far-right conservatism. “We found ourselves working within a very intense context, surrounded by very intense artists and music,” says Segarra. “We felt a lot of drama and noise around us, and we wanted to contribute a few delicate petals to  world that is hurting and filled with people delighting in the pain of others. Instead of putting salt on the wounds, we wanted to apply some ointments.”

While laughter may be the best medicine, hints of sober pessimism are also apparent throughout Joterías Bobas. Album opener “Claro Que Sí” is a direct reaction to Hidrogenesse’s critics, with Ballesteros displaying a rare flash of annoyance as he sings, “You enjoy singers who rage and cry, while we’re just silly f*ggotry.” On a more existential note, “Llorreír” finds Hidrogenesse teaming up with irreverent kitsch icon La Terremoto de Alcorcón for a deceptively cheerful cha-cha about having to laugh at the world to keep from crying. Even in their darkest anxieties, a wry outlook proves a lifesaving light.

“Perhaps our lyrics aren’t conventional in dealing with matters of love, desire or jealousy,” reflects Ballesteros, “but we try to create songs based in real life. We aren’t deliberately esoteric or surreal—reality is already quite strange.”

Hidrogenesse remain a prime example of the ways humor can subvert pretense, and Joterías Bobas is a refreshing reminder to let go of life’s suffocating seriousness. On the album cover, they cast themselves as musical fools—Segarra clad in colorful harlequin attire while Ballesteros portrays a mournful Pierrot clown. Their goal over the past two decades has never been to preach or indoctrinate, but to encourage audiences to find the smiles hidden behind every banal interaction. If Hidrogenesse can sweep you into a dreamy dancefloor fantasy while they’re at it, then their healing silliness has done the trick.