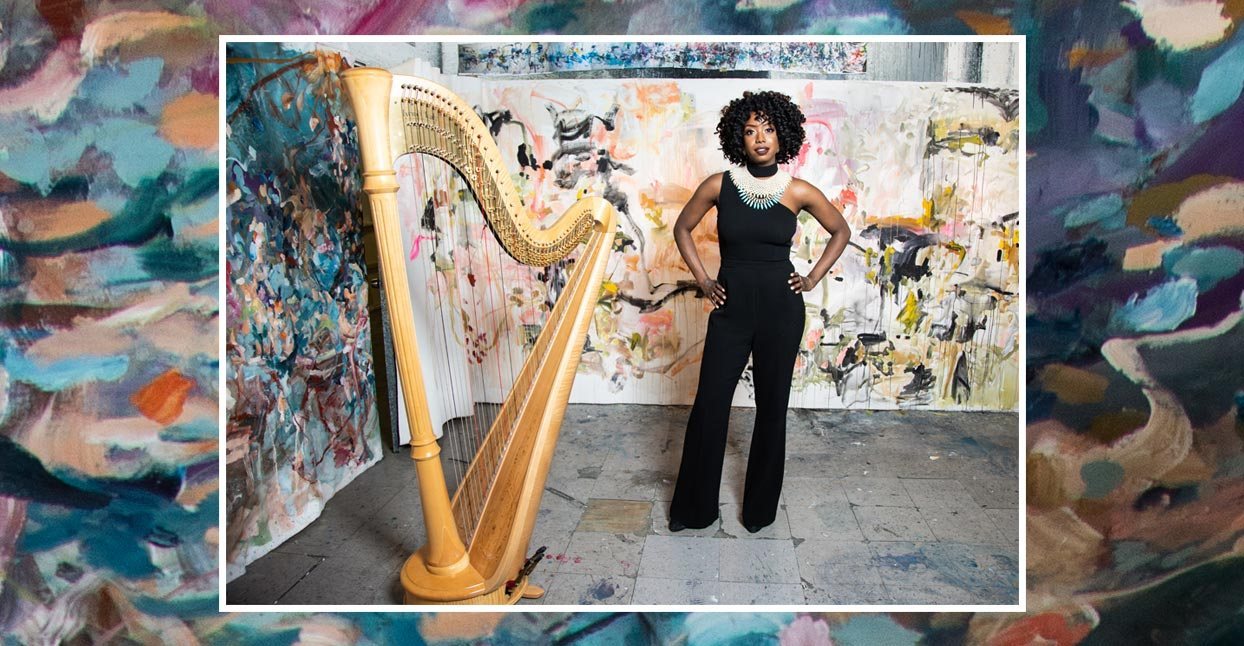 Brandee Younger knows what she’s up against. As a harpist, she knows people will hear her music and drop the names Alice Coltrane and Dorothy Ashby. Younger is fine with that: Coltrane and Ashby are legends who are still somewhat underrated in the pantheon of all-time great jazz musicians. “It’s a compliment,” Younger says over coffee on an unseasonably cold day in Manhattan. “Every concert I do pays tribute to them in a way. I feel like they never got their due.”

She’s right. Say the name “Coltrane” to old-school jazz guys, and they’ll talk about Alice’s husband, John, the iconic saxophonist who is credited as the godfather of spiritual jazz (though Sun-Ra’s music argues otherwise). Ashby is best known for her 1968 album Afro-Harping, where she worked the harp into soul and funk arrangements, creating an innovative sound that no one has been able to replicate since. Younger is heavily influenced by Coltrane and Ashby—two strong black women who navigated a male-dominated industry to create their own path. They also didn’t care about genre: Though their music scanned as “jazz,” they only wanted to serve the spirit. How the music came out was God’s part.

Younger carries all of that into her new album, Soul Awakening, a meditative set of songs completed in 2013 but just now seeing the light of day. The album is purposely influenced by the works of Coltrane and Ashby, down to the overcast ambience that permeates songs like “Games,” a cover of Ashby’s Afro-Harping cut of the same name, and “Blue Nile,” a recreation of Coltrane’s cut from 1970’s Ptah, the El Daoud. A feeling of deep reflection runs throughout the record; it’s the rightful heir to equally celestial recordings like Coltrane’s Journey to Satchidananda and Universal Consciousness.

In the six years since the album was recorded, Younger has released a live album and a proper solo LP, recorded a Beatles cover for a star-studded tribute album, and rubbed elbows with the legendary producer Quincy Jones. Because she’s grown so much creatively, she thought the music on Soul Awakening might sound dated when compared with what she’s working on now. “I thought about it, and I knew that I had to get it out of my system before I did anything else,” Younger says of the album. “I realized that I’m stunted until I get it out.” She is already a big deal in the Detroit, Philadelphia, and New York jazz scenes, and beloved by crate-diggers seeking music with substance. But while her name may ring out with the gray beards on Bleecker Street, Soul Awakening feels like both an introduction and a pathway to even greater recognition. After a few false starts and some session work that never materialized (she recorded hours of harp for John Legend’s smash hit “All of Me” and none of it appeared on the song), Younger is ready to make the leap to the next level.

Up until now, Younger has mostly sustained her career via word-of-mouth recommendations from big-name musicians—producers like Ryan Leslie, who mentioned her to singer Cassie, or bassist Derrick Hodge who shouted her out to Common, or her work with Salaam Remi, which led to her playing harp on Mack Wilds’s Grammy-nominated album New York: A Love Story. She also scored a Beyoncé look: Younger’s original composition, “Hortense,” was featured in the recent Netflix concert film, Homecoming. “Because I had no idea when it would occur in the doc, I kept thinking I’d hear maybe 10 to 20 seconds of a bit of harp,” Younger says. “But I was completely floored to hear how the song was featured: In its entirety, in such a special and personal segment of the documentary.” And while none of these accomplishments have put Younger’s name on the lips of mainstream music fans, they represent the kind of slow groundswell that eventually build to a crossover.

Over the past two years, Younger’s name has also surfaced in the liner notes of Makaya McCraven’s Universal Beings and Moses Sumney’s Aromanticism (Bandcamp’s No. 1 album of 2017), and she’s carved out a niche as an indispensable force in black music. “As a technician, she’s incredible,” McCraven says. “Brandee commands space. She brings an intensity to the music that everyone responds to.” Sumney took it a step further, calling her the best harpist in America, who isn’t beholden to the classical canon one would expect of her instrument. Sumney once saw Younger play in a swanky soul food spot in Harlem. “And that’s what listening to her play sounds like,” he adds, “like you’re in a fancy soul food restaurant in Harlem, on a Sunday afternoon with the after-church crowd. To work with Brandee is to take a masterclass on preparedness meeting spirit.”

That preparation has led to this point, and it seems the time is right for Younger to rise to the fore—even if the music that’s poised to take her there was created at a very different time in her life. “I sort of view it as a snapshot of where I was, and it’s still representative of where I am today,” Younger says. “What comes next will hopefully be a better version of that.”