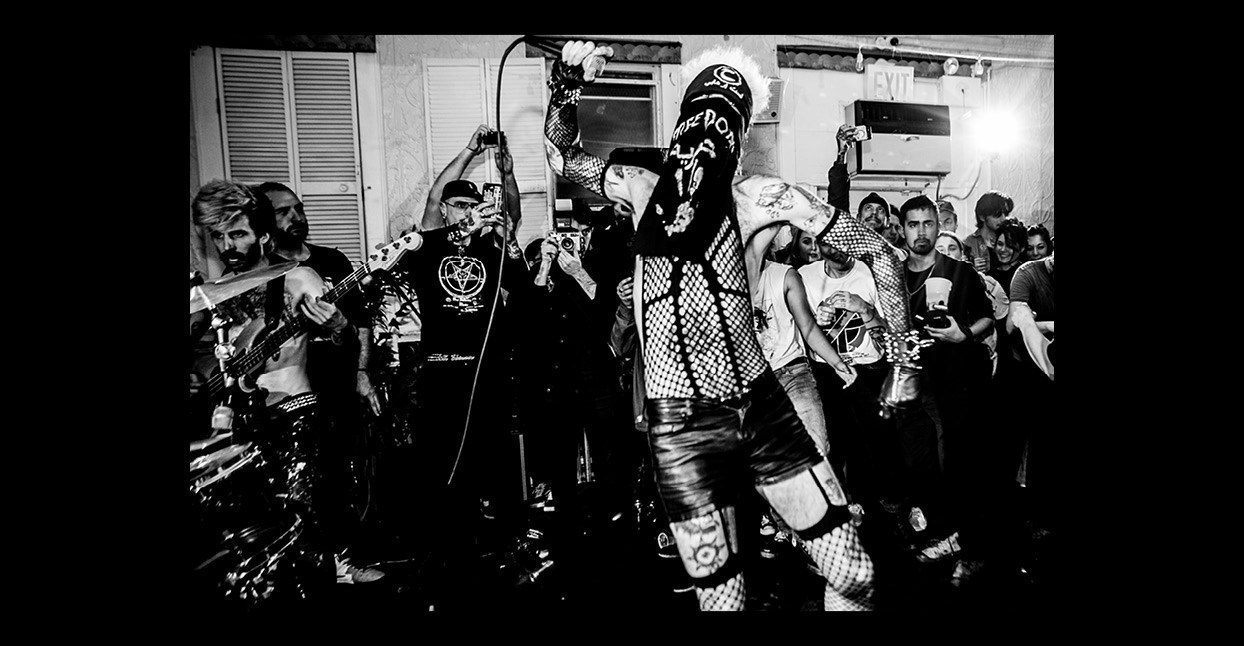 In his 1991 novel, Mao II, the author Don DeLillo proposes that the end goal of modern terrorists’ is not merely overt violence, but the creation of unforgettable, traumatizing images: or as he calls them, “raids on the human consciousness.” On their new EP وين كنيت بي ١١​/​٩؟? (which translates to Where Were You on 9​/​11​?), NYC hardcore punk band Haram boldly repurpose an outline of the World Trade Center, which has become an infamous image of modern terrorism, on their cover.

“The cover of the record is the [Twin] Towers in Arabic calligraphy, and a lot of people would be threatened by just that image,” says frontman Nader Haram. “On any corner in New York City, you’ll see ‘Never Forget’: beautiful towers made out of the American flag. It’s been immortalized and commercialized. We just had the idea of, ‘Hey, what if we took this question and made it a concept for a record, and challenged people to see it as a non-threatening thing.’”

As the only Muslim in his Yonkers Catholic elementary school at the time of the attack, Haram, who is Lebanese-American, remembers 9/11 as “the first major loss of innocence” in his life. It wasn’t just the graphic depictions of death and destruction; he also remembers his family receiving threats and being investigated by law enforcement, his non-Muslim neighbors ending their tradition of bringing over food and gifts for Ramadan, and his classmates looking at him as an “outsider” in the months that followed.

“It was definitely my first exposure to Islamophobia,” he says. “I remember thinking as a young person, ‘OK, I’m going to have to endure this for a few years, but this must get better. It must just be the result of this massive trauma.’ I justified it that way. But now as the years have gone by and it’s 2019, it’s maybe the worst it’s ever been.”

That’s one impetus for the new EP. The other is the many conversations about 9/11 that Haram’s had while abroad on tour. “Within the past year, Haram started traveling pretty far from home—Scandinavia, Australia, Canada—and I just started asking people, ‘Where were you on that day? What were you doing?’ And surprisingly, everyone had an answer. The farthest away you could get from the epicenter of that day, everyone had just as vivid a memory as any New Yorker. That got to me about how public that event was, and how far-reaching it was.”

وين كنيت بي ١١​/​٩؟? is brief and brutal, like any hardcore 7-inch worth its mettle. Haram’s last full-length, 2017’s بس ربحت, خسرت (When You Have Won, You Have Lost), saw the band sprinkling in traces of industrial and post-punk, but with only four tracks and nine minutes to spare, they’ve opted here for a tighter, more urgent style. By bringing Ben Greenberg (formerly of The Men and currently of Uniform) in to record and produce, Haram manage to sound bigger than ever, without losing any of their grit or grime.

Haram’s lyrics, all delivered in Arabic, reflect on personal experiences: some are about the event itself, others are about a modern world still grappling with the aftermath. “This is a way for me to reclaim my trauma,” he explains. Closing track “جها, جهادي” (“Jihad, Jihadi”) does just that, reflecting on how post-9/11 media has weaponized the Arabic word “jihad,” “tearing it away” from Haram’s original understanding of its meaning. “For me, ‘jihad’ is struggle,” he says. “It has to do with self-control and discipline, and always questioning yourself and the things around you to strive to be a better person.”

Haram (Arabic for “forbidden”) exist between the respective rock and hard place of American Islamophobia and the radical strains of Islam that still exist around the world. On one hand, Haram’s been repeatedly harassed by the Joint Terrorism Task Force and the NYPD, both of whom have misconstrued his anti-extremist, secular music. On the other, the band have the potential to anger actual extremists. This isn’t exactly an enviable position, but Haram sees it as a pure, vital manifestation of the punk ethos.

“I constantly wonder if other bands think about certain things we think about as a band,” he says. He goes on to express the band’s concerns regarding their upcoming tour in Southeast Asia, where Sharia law and strict Islamic governments are more prevalent. “We really have to consider that we might get in trouble here. We might have run-ins, we might get arrested, maybe we’ll get shot at. I constantly wonder what that means to me.”

But Haram aren’t backing down. “We’ve discovered a dynamic that is controversial and challenging—and to me, that’s what punk, at its core, has always been,” the frontman concludes. “It’s a challenge and a threat to the norm, but in an educated, self-aware way. I’m proud to be a part of that.