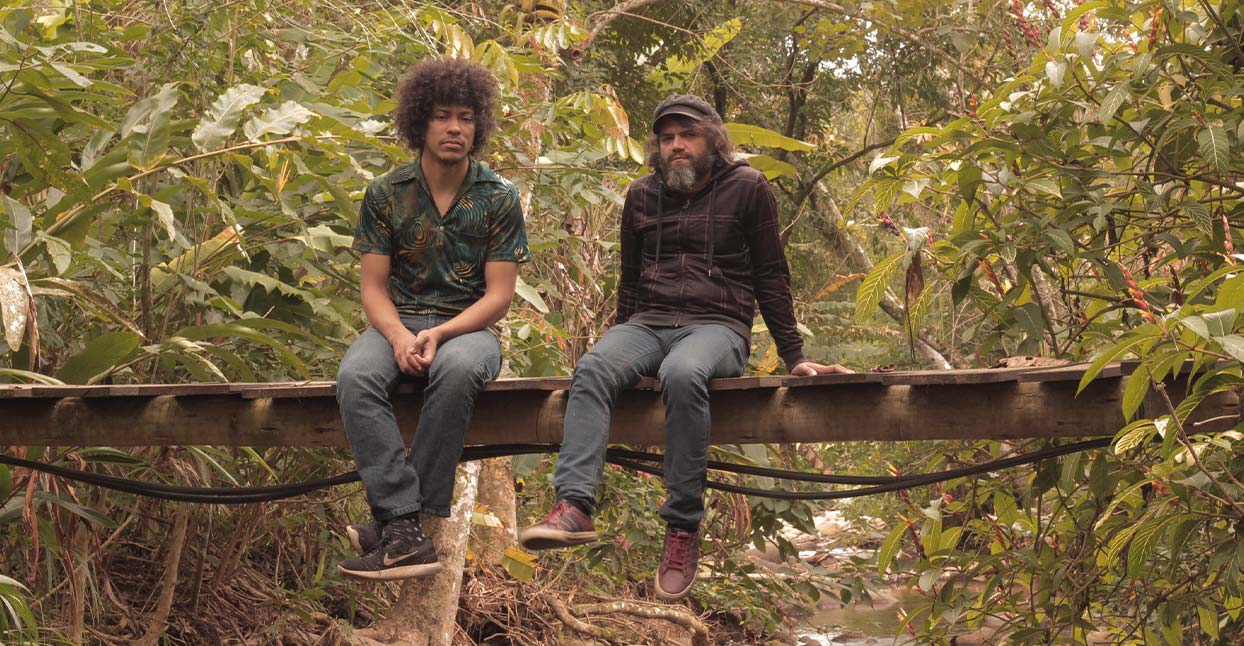 Although Americans often seem to view a musician’s country of origin as an essential factor in that artist’s creative identity, Pedro Bonifrate is right when he says there’s really no such thing as “Brazilian music.” The country is vast, and every region has its own unique sound—from the drifting, curtains-in-the-breeze samba of Rio de Janeiro to the pounding drums of Recife. “It may seem strange to you but it’s exactly like saying ‘North American music,’” he explains. “It wouldn’t make much sense, since there’s not that much in common between Dixieland, Laurie Spiegel, Slayer, or Hank Williams. We could say the same about Heitor Villa-Lobos, Jocy de Oliveira, Sepultura, or Os Mutantes.”

Bonifrate has released several albums and EPs of solo material since 2002, most of it in a somewhat lo-fi, bedroom psych-style, simultaneously layered and muffled. He sings primarily in Portuguese, though “Kissing By The Lake,” a country-ish lament from 2007’s Os Anões Da Villa Do Magma, was in English. Beginning in 2003 or so, he was also the leader of the band Supercordas, who made three albums before breaking up in 2016. Their music had a fuzzy melancholy that recalled ‘90s English acts like the Stone Roses or early Primal Scream as much as, if not more than, ‘60s psychedelia.

Guaxe is Bonifrate’s latest project, a collaboration with Dinho Almeida of the band Boogarins. Boogarins’ latest album, Sombrou Dúvida, released in May, is a noisy but gentle 10-song set with a drifting, psychedelic quality, like a cross between Café Tacvba and Can. Instruments are eaten up by static, sounds leap suddenly out of the background, and Almeida’s soft, Damo Suzuki-esque vocals float around like a soap bubble on a breeze. Bonifrate plays guitar and sings on “Dislexia Ou Transe” from Sombrou Dúvida.

Guaxe’s seven-track, 27-minute debut is even trippier than Boogarins or Supercordas, but it’s definitely a melding of the two men’s styles—as well as their voices, which wind together in an almost mesmerizing manner. The opening track, “Desafio Do Guaxe,” is built around a backwards melody and a simple but pounding drumbeat, while “Onda” sounds like it’s playing from underwater.

“We do listen to a lot of English-speaking bands from the ’90s and ’00s, not to mention the ’60s,” Bonifrate admits. “I’d say it’s a huge love of ours. But the Guaxe sound also owes a lot to Milton Nascimento, Belchior, and Lula Côrtes, and Zé Ramalho’s Paêbirú, for example, which are not the stereotypical Brazilian sound as it is internationally perceived.”

“Listening to the album now, I feel like the goal we achieved with this album was to merge our two composition/creation styles in a record that sounds very organic and unique,” says Almeida. “I think this kind of thing has the power to break any music style, country, or language barrier or preconception.”

The two men wrote the album together, except for the song “Nilo,” which Almeida brought in. “I might have used one or two ideas that were already in my head at the time, but most thoughts came out when we were together working on the songs. That’s quite a new thing to me,” says Bonifrate, who has always dominated his projects. Even with Supercordas, the arrangements and mixes may have been collaborative, but the songs were his.

“This album is very layered,” says Almeida, “so sometimes it’s hard to remember who did what. But I mostly played acoustic and electric guitar, and drums on ‘Povo Marcado.’ Pedro messed with all the keys, drums, viola caipira [the 10-string guitar he played on Boogarins’ album], a bunch of the guitars and the crazy noises in the songs. The whole process was very interactive between us too, so there are some guitars that I played, but I did it in the way that Pedro said for me to do. There are also some moments that I asked him to do stuff that I can’t do on my own, so at some points it’s like I’m listening to myself playing with Pedro’s mind, or the opposite—which is very fun and a great experience as a musician.”

The album was recorded at Bonifrate’s house in Paraty, a touristy but culturally rich coastal town between Rio and São Paulo. Founded in 1597 and formally established 70 years later by Portuguese colonists, it has been carefully preserved and hosts four centuries-old churches and cobblestone streets on which no cars are permitted. “It’s been going through a strong process of gentrification, especially in the last 20 years, so we have an Old Town Center that looks like a fancy expensive shopping mall, and a lot of people living by open sewers a few hundred meters from there,” says Bonifrate. “It’s an unequal place, socially, with a very rich popular culture that tries to resist that kind of process with their art and their territory, but it’s a hard fight. My last solo record Lady Remédios is an attempt to see it as a microcosm of Brazil, full of beauty and contradictions.

“I work with local culture as a day job in a public museum,” he continues, “but musically I’ve been a bit isolated, which is alright, because I love working alone with music. That could change since there’s a lot of great musicians playing in town lately. I guess I’d have to catch up with them, because I suck at being a virtuoso musician.”

For the time being at least, Bonifrate will have a creative partner—Guaxe seem to be evolving from a fun project into an actual band. “We started this as a recording thing, it took some time for us to think about a ‘record,’” says Almeida. “Now that we have one and it’s being properly released and promoted, we’ve started to think about playing live. It will be very great to keep this as a two-person project, to try to bring a little bit of the recording process energy and atmosphere to the stage, [that] sounds awesome to us.”