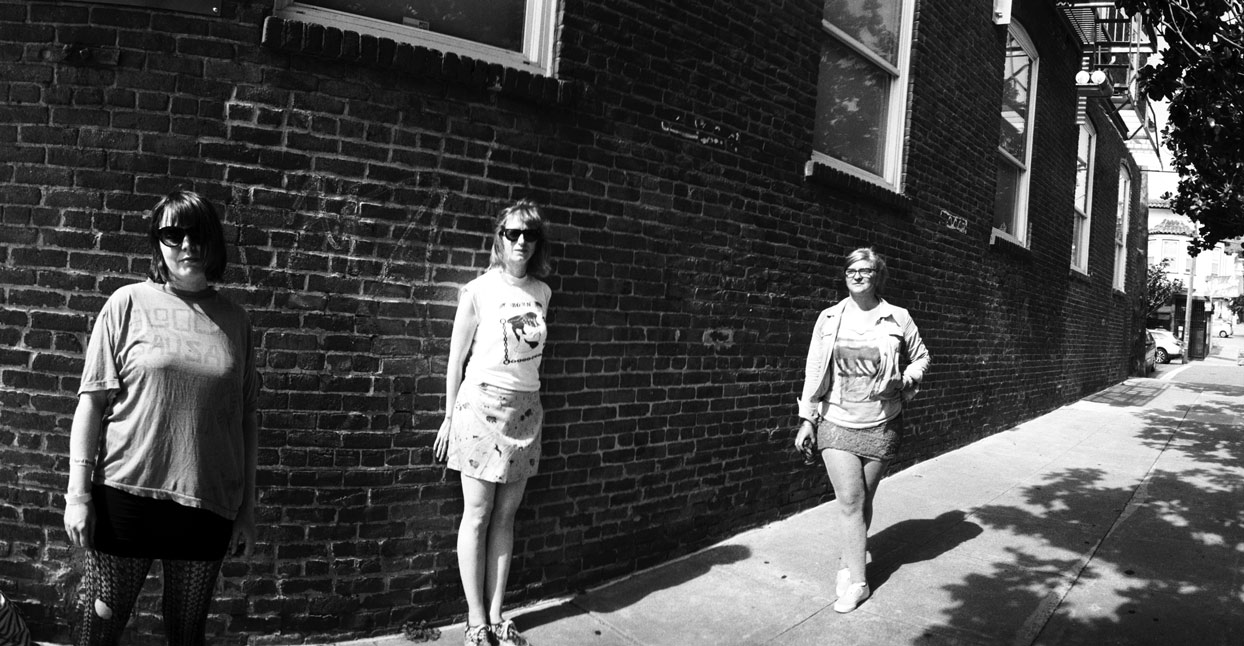 If “supergroups” exist, girlSperm (aka “gSp”) surely qualifies. Its members, Marissa Magic, Tobi Vail, and Layla Gibbon, need little introduction for most attuned to U.S. feminist, punk, and/or noise circles and the music, writing, and performance art thereof. When not engaged in making radical sounds that Vail describes as “pushing back against a culture that does not reflect or value feminist, anti-authoritarian ideals, or acknowledge that conflict isn’t always negative,” all three members of girlSperm are deeply inventive, hilarious, and incisive writers who regularly publish under- and overground work both on- and offline.

In DEEP SUBURBIA #2, from 2012-13, Magic writes about a fascination with male rock star sexuality: “Not wanting to be a man exactly but wanting the built-in fantasy that comes along with being a man. I wanted to be a bad boy. The Jack Kerouac whatever wander across the U.S. (p.s. hate that book) […] I wanted a sexuality sans the male gaze, to not have my sexuality be for someone else but instead be an incidental aspect of myself.” Their music is playful in a way punk and feminism are rarely, and fearlessly joyful in a way all artists can be inspired by.

gSp’s first 12” is out now on Thrilling Living Records, and we caught up with the band over the summer to talk about the power of joyous chaos, the connection between music and writing, and more.

What is the creation myth of gSp?

Tobi Vail: I was a big fan of Shady Ladies and always loved Skinned Teen and all of Layla’s groups and fanzines. Marissa and I were a part of a performance once where we crashed an art show. Another time […] Marissa and I took over the audience [at this] noise percussion drum circle. The band got annoyed at us, but we were convinced we transformed an otherwise lackluster event into a happening. I think this is the night we became friends. Both actions were chaotic, feminist, spontaneous, and joyous. I see girlSperm as the next logical step. I have missed being in a feminist collective where I get to write songs, play drums, and sing, so this is pretty magical and life affirming for me.

Can you tell me about the styling of your name (capital S in the middle)?

Marissa Magic: I think, near the beginning of this band, I was really into the idea of trying to be a supervillain or a superhero—mainly just in aesthetics, but kind of also thinking of it in terms of magic and courage, and always trying to strive towards those characteristics even though it can be scary and tiring. It’s also in step with ideas of taking over or revolution.

You’re all prolific musicians and writers. Do you think something unique is being expressed by your collective work here?

Layla Gibbon: It’s hard to find people that match your sensibility in such a specific way, I have tried to play music with other people and have been as flummoxed by their rock ‘n’ roll riffs as they have been by my inability to play such things. I grew up going to see Huggy Bear and Thee Headcoatees, both bands informed my relationship to the music I can play on my guitar and my idea of a band as a group, a collective idea as well as a sound. I feel a kinship with Tobi and Marissa, musically, where it doesn’t feel like work. It makes me think of when I was a teenage skateboarder and all the boys would spend hours focused on learning a trick, whereas me and my girlfriends would sneak off to the secret vert ramp located in an old railway track and just slide around with no focus on achievement, more on pleasure and goofing off.

Capitalism so significantly shapes our values and thus, our tastes. A lot of times, if people are praising art they’re praising its originality, its uniqueness. What do you think about this pressure?

Gibbon: I feel like we’re in this strange end-times capitalism era where the production of things is only meaningful if you have a story to sell. People make millions just by selling an idea of themselves—cf: read Poly Styrene and The Pop Group lyrics—creating a sort of advertorial of their existence in the face of the death of industry [and] jobs, etc.

Magic: I think a lot of the time when capitalism is praising something as unique, that might be true to a point, but it must be palatable in some way, like ready to be repeated or sold somehow. When somebody is like, ‘WHY ISN’T THIS BAND HUGE,’ I don’t want everyone to like and relate to the things I like or relate to.

Conversely, girlSperm is a musical breath of fresh air. My theory is that because all three of you are avid music lovers, you’re drawing from a musically eclectic terrain. Any explicitly intended reference points?

Gibbon: Any time I have tried to play music with people with a specific genre vision in mind, it has been a total nightmare. I don’t like the Civil War reenactment reality where people are able to perfectly recreate years past, costumes and sound in alignment! I like bands that are sort of a mistake. I think girlSperm has a vision but it’s not a genre report? Our sound […] summarizes a specific moment of our existence more than a shared group of musical influences though I am sure some of that creeps in, our love of the B-52s and Flipper and inside jokes.

You wake up tomorrow and girlSperm has body-swapped with Trump, Pence, and Sean Spicer. You have 24 hours till you go back to Layla, Marissa, and Tobi. What do you do?

Vail: I would try to mess up the nuclear code so that no one could start a war and fund universal healthcare and give everyone a living wage and a place to live. Could we do that in 24 hours?

Magic: I’m sure we could at least do the code part.

Is social death necessary for girls to break out of the stifling mundanity of our woman-hating day-to-day reality?

Magic: Social death is kind of this two-pronged idea of anxiety and isolation. It’s really hard work to kind of battle through those things on a daily basis, but really necessary. Lately, I’ve been spending a lot of time working at a square job, and I’m exhausted for myriad reasons, but I’ve been trying to push myself to show up, like leaving the house, supporting freaky art stuff, hanging with buddies and such. The idea is, will you let stifling mundanity control you or will you break through it?

Vail: Death, or grief, I guess, can lead to social isolation, which is a kind of death of community. As for social death as a way of life, you might see that more in big cities. Or maybe that’s just my perspective as a non-big city dweller.

Gibbon: Liberation now, out of the bars and onto the streets.

Henri Riot: who is he?

Vail: Henri Riot is a real fictional character that we met when Pussy Riot Olympia hung out with Henry Rollins after a show here. I don’t know if he is French or what, but he’s kind of obsessed with Russia.

Layla, in 2009 you said at a panel, basically: ‘The idea of a feminist subculture existing in punk is so dreamy, and that discourse doesn’t exist right now.’ You said that it’s basically only historical and relegated to the zine museum. What about now in 2017?

Magic: This may be a very lucky and specific bubble I exist in, and I kind of hang out more in noise circles than hardcore circles, but currently queers and women of color are really dominating as far as who is playing shows and who is making things happen around the Bay Area and it is so exhilarating to see. Bands like SBSM, Earthbound, Ugly, Peligras, Public Cry, and a gazillion others. Also there is a black and brown punk fest called The Universe is Lit here in the Bay Area.

Vail: There was a hardcore festival here, Book Your Own Fest, in April, that actively centered queer/trans/POC bands and that was pretty cool. We have an overabundance of punk history being archived in libraries [and] academic institutions. There is a lot of money and power going into documenting the past but not a lot of awareness about what is happening in the feminist punk world in the present tense, outside of the people involved in those scenes.

Gibbon: That is a weird thing for me to say, I think? I don’t know. It annoys me that the person who posted [this video] is a tech dude who made sure it is always at the top of the Internet search, in other words, I won’t be on any more panel discussions… At that point I was the editor of MRR and very aware of the vast amount and constant evolution of feminist-informed subcultural sounds. Maybe I was referring to a specific subcultural moment not existing at that point, [like] mods vs. rockers, grrrls vs. grrrrungers? Punk and feminists that make wild sounds are constantly sprouting and making new bands and so on… Check out Palberta from New England, or Bent from Australia for further info.

Tobi, you told me once when I asked why I had to label myself as anything at all, that people need to label themselves for political purposes, for collective action, for changing things. If ‘what we do is secret,’ but also what we do is inherently political and public, especially when we communicate on social media, how can we make these truths coexist?

Vail: When identity is perceived as social, we are closer to political struggle and social change. We were talking about sexual identity in this case, and I was bringing up the idea of how sexual identity isn’t purely self-expression, but also a political identity that serves a purpose in a society that excludes LGBTQ people. Your question is a puzzle, but perhaps Henri Riot has the right idea! I wonder what Pussy Riot would have done next if the Russian government had allowed them to remain anonymous.

Magic: While I do identify as a feminist and a freak and a punk, I generally keep myself secret. When it comes to bands it is sometimes worthwhile to be more public, and it’s important to gSp to be an explicitly feminist band. [Of] all the different entrances I had into punk, two I think about a lot are Nirvana talking about Flipper and The Raincoats, and reading a review of a Babes in Toyland record in the San Francisco Chronicle. I’m never sure how to apply those facts to my own work, but I think about it a lot.